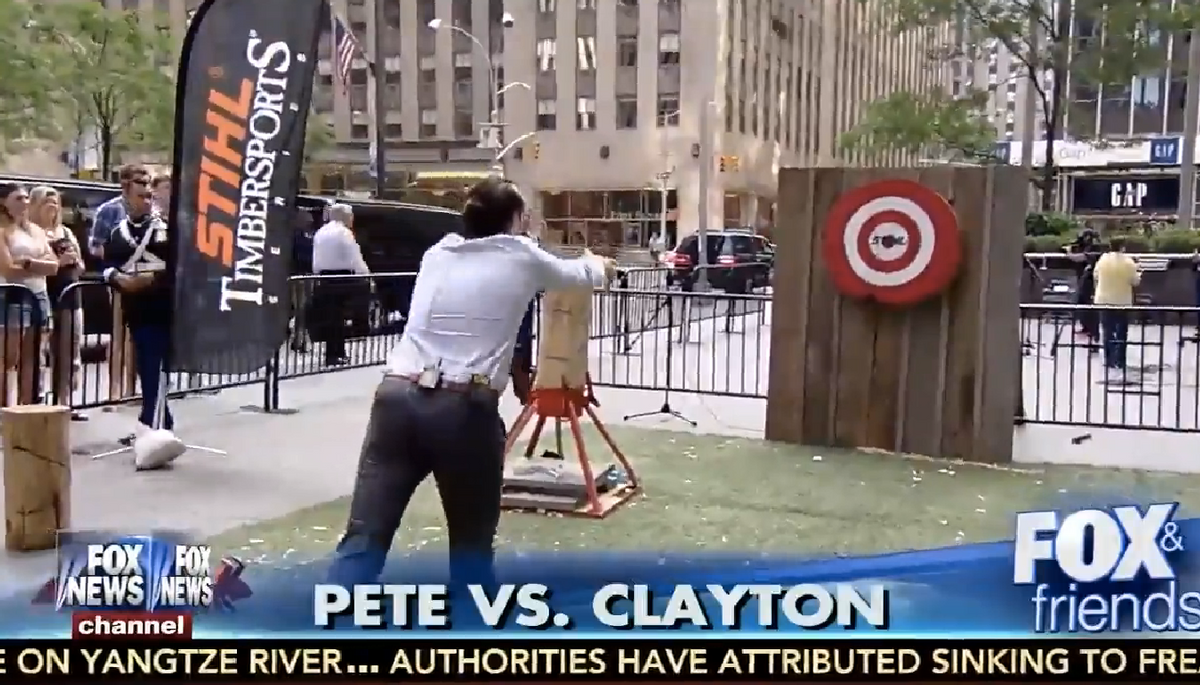 Fox News rarely serves up commentary this sharp, but on a Sunday broadcast of "Fox & Friends," co-host Pete Hegseth managed to injure a passing marching band player when he threw an axe at a target and missed by a country mile.

The axe-throwing was part of a teaser for an upcoming timbersports segment, and the horrific slip-up went largely unnoticed by media outlets until Mediaite revisited the live segment Monday afternoon.

In the recently uncovered footage, live cameras capture Hegseth's pained expression as his axe flies past the board. They also capture the many shocked faces of bystanders who, unlike Hegserth, realize where the axe is headed: straight for Jeff Prosperie, lead drummer of West Point's Hellcats.

Thankfully, cameras cut away as the the axe hits Prosperie, but we do see Prosperie walking around in the background with his hand clutching his right arm, as the rest of the band, there to celebrate Flag Day, continues to play.

Marching on like a true West Pointer, Prosperie later appears on screen. He does not appear to be in pain. Nor do does he make any mention of the horror that has just unfolded.

Not until a day later does Prosperie finally divulge the details of his axe attack, writing in a Facebook post:

"I was hit by an axe while performing a drum solo live on National TV.....words I never imagined saying! This happened last Sunday and I have been reluctant to post but starting to receive inquiries from concerned family and friends. I am thankful to God that the double sided blade only hit broadside on the outer elbow with significant impact and a couple of cuts as it fell along my wrist. It could have been much worse or fatal. Focusing on full physical and emotional recovery."

"Pat, we were doing commercial bumps on Fox and Friends Sunday morning celebrating the Army’s 240th birthday and flag day. My leadership told me they were told there would be no axe throwing. I think the anchor person went rogue and decided to throw it. He had only thrown it once before in practice for an upcoming segment and they told him to throw it with more force. The vid you see is edited showing the Televised portion of the throw and then edited to a portion that was taken on someone’s phone of us being videoed. The part that was actually televised showed the overthrown axe and then segued to us for the drum solo bump, only showing me walking behind the section holding my arm. The actual part where the axe hit me was not televised. Poor decision, obvious negligence, should not have happened, could have been avoided. When shooting or throwing, always know what is behind your target. Basic safety rule. I’m feeling blessed on Father’s day with my 5 children, alive, and with all limbs."

And there you have it: The best filmed use for an axe since "American Psycho."