Obama shines on "WTF": Maron's intimate podcast could be a game-changer for American politics 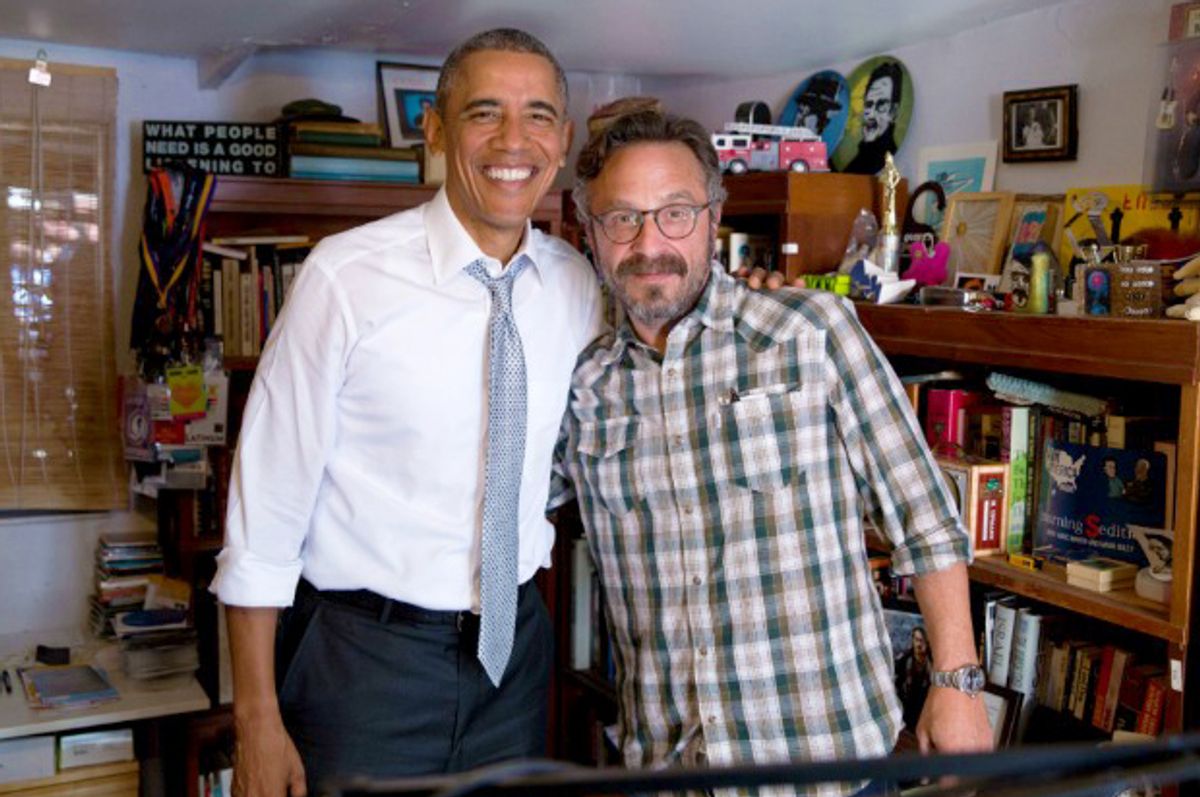 Can you believe President Obama said the N-word on "WTF"!?!? There, we got that out of the way. We good? Now we can, as Marc Maron would say, get into it.

Sometimes podcast devotees forget that the medium is nascent, even in this late stage of its development (it’s downright ancient in Internet years, after all). Relatively early adopters are so steeped in the culture of podcasts and their proliferation that it’s easy to gloss over the fact that most people are pretty clueless about them. Sure, "Serial" helped expose an entire segment of middle class liberal basics to the world of podcasts, but contrary to popular belief — and the appearance of your Twitter feed — that’s not the entire world.

So the President of the goddamn United States of America sitting down with Marc Maron for his "WTF" podcast is a watershed moment. Both for podcasting as a form, and potentially for the shape of American discourse. Radio was once such an intimate and engaging medium before deregulation destroyed its character. Podcasting has been able to take that intimacy and crank it up by an order of magnitude. I’m not saying this one interview will change the world, but the conversation with President Obama was unlike any I’ve heard to this point.

Given Maron’s propensity to delve into controversial topics on an internal level and pick at emotional scars, it was hard to tell how things would go. This isn’t a cult figure like Chris Elliott or even a megastar like Will Ferrell. This is the most important man in the free world; someone who only exists in the distance, as a caricature of a caricature in the minds of almost everyone. Even when he shows emotion, it’s only after it's been sifted through the pens of speechwriters and communications directors. And considering that the interview took place a day after Obama addressed the shooting in South Carolina, there was an even thicker fog of mystery surrounding the podcast.

Part of me expected Maron to be Maron, to poke and prod. Part of me expected him be more reserved and distant. In other words, I didn’t know if he would lead or follow. What happened was at once both and neither. Obama wasn’t humanized through discussion of his upbringing or his struggles (though both were touched upon), but through the manner in which he was allowed to speak. While politics was unsurprisingly a large part of the conversation, hammering home talking points or staying on message wasn’t. Again, this is a guy who is understandably coached on almost every word that comes out of his mouth.

So when he spoke at length about the looming reality of racism in America while dropping the N-word (“It’s not just a matter of it not being polite to say ‘n**ger’ in public. That’s not the measure of whether racism still exists or not.”), it was powerful and inspiring. When he talked about how essential pragmatism is to American politics (“Sometimes your job is just to make stuff work. Sometimes the task of government is to make incremental improvements or try to steer the ocean liner two degrees north or south...”), it made you want to abandon stubborn ideologies. And when Obama agreed with Maron’s assertion that the presidency is “middle management,” you knew grandiosity and ego went right out the garage door.

Listening to the President of the United States of America talk about what it takes to be the President of the United States of America on a purely human level was a little jarring. And I mean that in the best way possible. Here’s someone constantly forced to play an incredibly rigid role — he readily admitted as much while commiserating with Maron about the freedom that comes from fearlessness in the performance — actually being himself. To suggest that Obama had completely shed all concern for how he’d be perceived is obviously ludicrous, but how many people ever do? That’s not about playing the role of President as much as it’s about playing the role of a human being.

When there’s not an audience in the room, real or imagined, there’s no performance needed. That’s the power of podcasting. That’s why this interview has the potential to change political discourse. When politicians have the freedom to stop performing, they have faces and not just masks. When people have faces, whether it’s an elected official or the guy at the end of the bar, discussing politics becomes immeasurably easier. Certainly far from easy, but easier nonetheless. Marc Maron didn’t reveal any deep, dark secrets about Barack Obama. But he did help the president take off his mask.