No, I won’t praise Nikki Haley: It shouldn't have taken a massacre to do the right thing on the Confederate flag

The South Carolina governor solved a big problem for the GOP. And why was RNC chair Reince Priebus there, anyway? 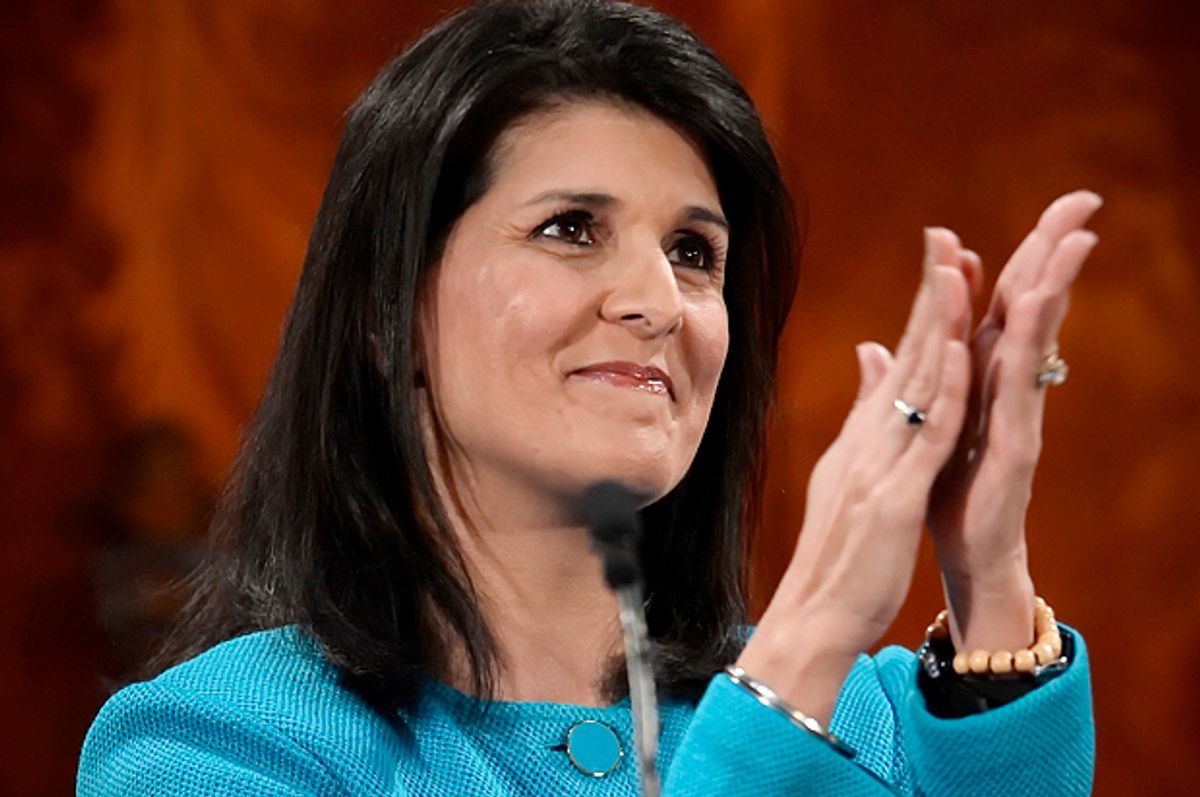 South Carolina Gov. Nikki Haley jumped to the top tier of GOP vice presidential contenders Monday when she called for the state to remove the Confederate flag from capitol grounds. “Today we are here in a moment of unity in our state, without ill will, to say it’s time to move the flag from the capitol grounds,” she declared.

Haley certainly deserves the GOP’s thanks for rescuing the party’s presidential field from its own cowardice about the issue. From Jeb Bush and Scott Walker to Rick Santorum and Mike Huckabee – they bobbed and weaved all weekend, first unable to say clearly that the Charleston massacre was about race, then dodging the flag issue as one for the state to decide. Maybe that makes Haley VP material – she solved a big problem for her potential future boss, whoever he turns out to be.

Of course, Haley deserves some credit for the move. She could be like former Mississippi Gov. Haley Barbour, who told the folks on “Morning Joe” Tuesday that he’s not bothered by the Confederate symbol on his state flag – or the Confederate flag, either. Barbour also refused to denounce KKK founder Nathan Bedford Forest when he was exploring a presidential run in 2012.

I was moved Thursday morning watching Haley struggle for composure during her statement about the Mother Emanuel massacre. Her tears seemed genuine and appropriate to the horror.  Her smiling for the cameras on Monday did not. There was an air of pride about the whole event, as though South Carolina was committing to a bold new venture – universal pre-kindergarten, perhaps, or a new state university campus– rather than doing the right thing, belatedly, and only after the murder of nine African Americans.

Are we really supposed to believe these people didn’t know the flag was a symbol of racism and hate until they saw it gracing killer Dylann Roof’s racist selfies? Black South Carolinians have been telling them that for a long time, pretty much since state segregationists raised the flag again in 1962, as a symbol of racist defiance during the battle over Jim Crow.

Still, while Haley’s call to remove the flag felt long overdue, the turnabout came shockingly fast, all at the same time. It's a testament to the horror of the Mother Emanuel massacre, and to the bravery of the victims’ families, who have responded to the nightmare with love and forgiveness. It’s a reminder of how, during the 1960s civil rights movement, the loving non-violence of black protesters juxtaposed with the hateful and bloody cruelty of their southern persecutors changed public opinion on race in a relatively short span of time.  The carnage in Selma, for instance, put the Voting Rights Act at the top of Lyndon Johnson’s agenda. Within five turbulent months, it became law.

Yet that example makes what South Carolina has done, in the wake of the racist Charleston killings, seem puny by comparison. Haley deserves little credit for doing what should have been done 50 years ago.

All through her re-election campaign last year, she claimed the flag was just a symbol of Southern grit, and said it wasn’t a problem because no CEO ever complained about it. Well, apparently CEOs began weighing in, and the flag suddenly became a noose that was strangling the state’s business future. Just since Haley’s announcement, Walmart and Sears have announced they’ll no longer sell Confederate flag merchandise.

The presence of Priebus was the tell that Haley’s move was about politics. By what stretch of imagination did he belong on that stage, which was otherwise occupied by South Carolina leaders? Reportedly Haley invited him; but DNC chair Debbie Wasserman Schultz received no such invitation. If the point was to be united and bipartisan, why was one party’s chair invited and the other's not?

No doubt Priebus is grateful that Haley got his presidential contenders off the hook. But what does it mean that, before Haley’s move, the only GOP presidential candidate with the spine to call for removing the flag is one who isn’t running, Mitt Romney? To his credit, Romney supported the flag’s removal back in 2007, during his first run for president. Why was it so hard for others to do the same?

The answer is that the GOP is beholden to its white Southern base, and isn’t ready to face a multiracial future without them. Nikki Haley has now given the 2016 contenders cover to do the right thing and support the flag’s removal. She deserves some credit for the move (but not as much as she’s getting); they deserve none.