The 10 Commandments of Litchfield: "Make a reek, my sisters, make a reek to last one thousand years!"

"Orange is the New Black's" unofficial gospel, as told in the words of its women 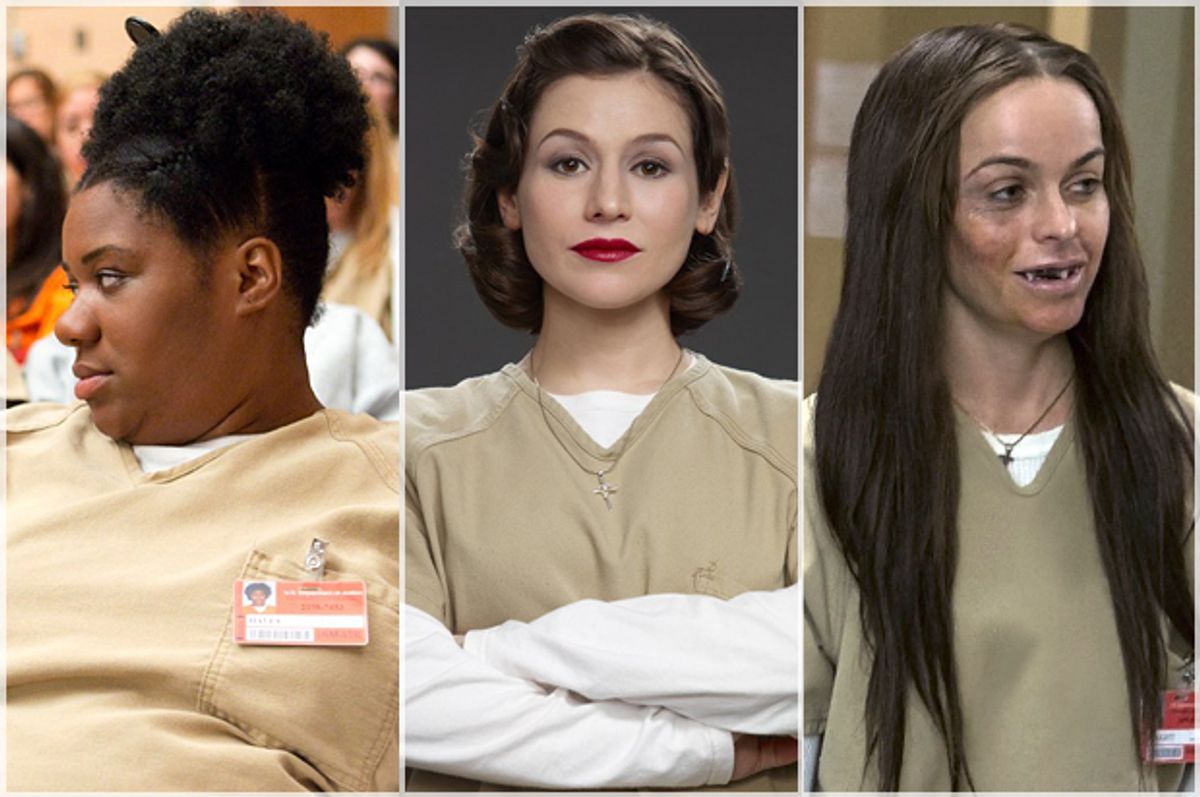 [Spoilers for season 3 abound. If you haven't finished season 3, read at your own risk.]

This season of “Orange is the New Black” was heavy on the religious references: both in flashbacks, as we learned about Leanne’s Amish past and Norma's cult conversion, and via new developments in the prison, from Cindy's newfound embrace of Judaism to the spontaneous development of a new Norma-based theological system.

In honor of this season's prominent thematic through-line, we've combed the season to create an unofficial gospel according to Litchfield, as told through the words of its inmates -- the wise, hardened, spunky, flawed women forced to set their own moral and spiritual codes as they try to make their way in a cruelly limited world.

And so it is written:

1. Thou shalt stay true to thyself:
"I have had to fight for this all my life, Dad. All my life. Strangers, girlfriends, fuck, even my own parents all asking me to be something that I am not. Do you have any idea what that feels like? Like, your whole fucking existence is being denied, like 'Whoa, you'd be better off if you were invisible?' Yeah. I refuse to be invisible, Daddy. Not for you, not for Mom not for anybody.” -- Boo

…even if it means going to hell:
Pennsatucky: "Hey, well, listen, if that's who you are, then that's who you are. And there's no use in fightin' it, and if you ain't gonna fight it, you might as well embrace it, or else you're living in purgatory."
Boo: "Fuck yeah. Here's to heaven or hell and nothing in between."

2. Thou shalt not be nice, unless thou art a coward or a democrat:
Piper: "You know, many cultures value a person's dignity over the truth. In Korea, they actually call it kibun. I heard that on 'The World with Marco Werman.'"
Red: "In Russia, we call it bullshit."
Piper: "Look, there was nothing you could do about it, and I thought that I was saving you some pain."
Red: "You thought if you didn't bring me bad news, I won't kill the messenger."
Piper: "I said what I said because I am a nice person and it felt right."
Red: "Nice is for cowards and Democrats."

3. Thou shalt not be afraid to use thy womanly powers to thy advantage:.
“No one in here is people. You think this is a normal relationship? Human to human? I take advantage, you get your feelings hurt. You forget that when you leave here tonight, you lock me in behind you....You take a woman's power away. Her work, her family, her currency. You leave her with one coin, the one she was born with. It may be tawdry and demeaning, but if she has to, she will spend it.” — Red

…particularly thy vaginal odor:
"I, too, was once embarrassed and squeamish about my personal eau de parfum. But then I thought, why should I be ashamed?. Isn’t that  part of the self hatred that has been bred into me by the patriarchy? And are those same men that will shame me? Are they not the same me that will wear my panties on their head, inhaling deeply? Ladies, now is the time to be bold. For when these men smell your panties, they are smelling your character. Let them smell daring and courage. Let them smell women who are unabashed, and un-self conscious, and let them say that Litchfield is a place where women love their bodies, and have love to spare. Sisters, we may be incarcerated, but our panties will travel the world. And in that way, long after we are gone, our smell our smell will linger in some gas station in Toronto, in some office cubicle in Tokyo. And in that way, we are known, and in that way, we are remembered. Do you want to be remembered? Then sweat profusely, and fart with abandon, and make a reek, make a reek my sisters, make a reek to last one thousand years!” — Piper

4. Thou shalt be open to embracing unconventional belief systems, even randomly improvised Norma-based theological systems:
"We got a belief system. We believe in kindness and acceptance. And finding the peace within that can then radiate out into the world and create change. And through silent meditation, we address the roar of pain and loneliness and tame it. And through reflection, we can see nothingness and in nothingness, we find clarity. We have faith.” -- Leanne

”I prayed to Norma for deliverance, and deliverance felleth from the sky. I'm telling you, what Elvis did for music and Eminem did for rap, Norma is gonna do for jungle magic.” — Angie

"The way I see it it's the armor you put on every day. The armor that that it takes to get through every day. It gets heavier and heavier as you live your life, you know? Especially in here. But when you look at Norma you can take that armor off because it's safe. You're safe. And you're crying because it feels so good to take that armor off.And you realize how tall you can be without it how light.” -- Soso

…and voodoo, though you have to be careful with that stuff:
Janae: "What you want with that voodoo magic anyhow?"
Taystee: "Don't be playing around with that. Mess with the evil forces you'll be out like Cedric Diggory."
Cindy: "Who?"
Taystee and Poussey: "Harry Potter."
Taystee: "Died in the Triwizard Tournament."

5.  Although the Abrahamic religions do have their perks:
"If you were a Christian, you could tell everybody what to do, and then they'd do it so they don't hurt your feelings, because that's against the law.” -- Pennsatucky

6. Especially Judaism! Seriously, thou shalt not be afraid to do whatever it takes to get those kosher meals, because food is IMPORTANT:

Lolly: “For a long time, 'kosher' meant hot dogs to me. Really, really good hot dogs. But now, it just means so much more. Now, it means broccoli, green beans...."
Taystee: "You know what I hate? Shrimps. Damn, dirty shrimps. Don't even talk to me about shrimps!”

…thou shalt not be afraid to invoke Jewish cultural figures in thy quest:
"The whole brood of Hayes, we lived under the Cyclone on Coney Island, right? Brooklyn in the house. A-yo! And, uh, oh, I was always a nervous kid growing up, always worrying about the universe expanding, and and so, my parents took me to a shrink, and the shrink was like, 'Cindy, quit your worrying. The universe be chilling for another billion years.' But I couldn't stop worrying and cooking lobsters and hanging with women in suspenders." -- Cindy

...or to work your connections:
Taystee: “Man, I told that rabbi I was Drake's cousin, worked the whole Black-Jewish mafia thing. But I guess he ain't never heard of Drake.”
Cindy: “Well, fool, you're, like, fifty shades darker than Drake.”
Taystee: “Fifty Shades of Drake!”

7. But ultimately, never forget that belief is about a lot more than its cultural references:
“I was raised in a church where I was told to believe and pray. And if I was bad, I'd go to hell. If I was good, I'd go to heaven. And if I'd ask Jesus, he'd forgive me, and that was that. And here y'all saying: Ain't no hell, ain't sure about heaven. And if you do something wrong, you got to figure it out yourself. And as far as God's concerned, it's your job to keep asking questions and to keep learning and to keep arguing. It's like a verb. It's like you do God. And that's a lot of work. But I think I'm in, at least as far as I can see it. I mean, maybe I'll learn more and say, 'Fuck the whole thing.' I mean, but I wanna learn more, and I think I gotta be in it to do that.” — Cindy

8. And that ultimately, all cultures and faiths have points of convergence:
“Latinas are halfway Jew already, I mean the hora and the conga line? Basically the same thing!” — Flaca

“The Abrahamic religions are pretty much all the same, 'til you get to Jesus” — Sister Ingalls

Leanne: “As I was saying, we gotta think of this as the first test, like the Jews wandering the desert, or the early Christians, wherever they wandered.”
Angie: “The desert, I think. Everybody was in the desert for a while.”

“Your skin doesn’t have to be black as long as your heart is black.” — Suzanne

9. And it just helps to believe in something, no matter what it is
“Once you know Santa Claus isn’t real, it’s all downhill from there. It’s good to have something to believe in – giant, drunky squirrel, Santa. It’s like the test says, ‘Ideas are better than reality.’” — Suzanne

10. Because morality is relative, and life is hard:
“We all think we're good guys … I used to work for a drug dealer who wouldn't hesitate to put a bullet in your head if you crossed him, or if you stopped being useful to him, but in his mind, he's still a good guy. Heroin Robin Hood because he cut out the Mexican cartels and passed on the savings to the consumer, and he never cut his shit with brick dust. And you're not just another shill taking a paycheck from an evil system of oppression, 'cause you're fighting it from the inside with drama class. Whatever you need to tell yourself to get by. But excuse me if I don't want to spend my precious time catering to the delusion that you're making a difference.I have my own quilt of lies to sew.” — Alex

Gloria: "It's this place. We're locked up, all of us in a cage. And it brings out, man, it brings out the worst, most selfish parts."
Sister Ingalls: "It's this place. It's us. I didn't say anything either when they took Sophia to Seg. We fail, and God forgives us, but I don't know if we can ever really forgive each other or ourselves. I guess you can say some Hail Marys. I don't know what else to tell you. It's all wrong."