The curious case of Nikki Haley: What the Republican governor can tell us about American racial identity 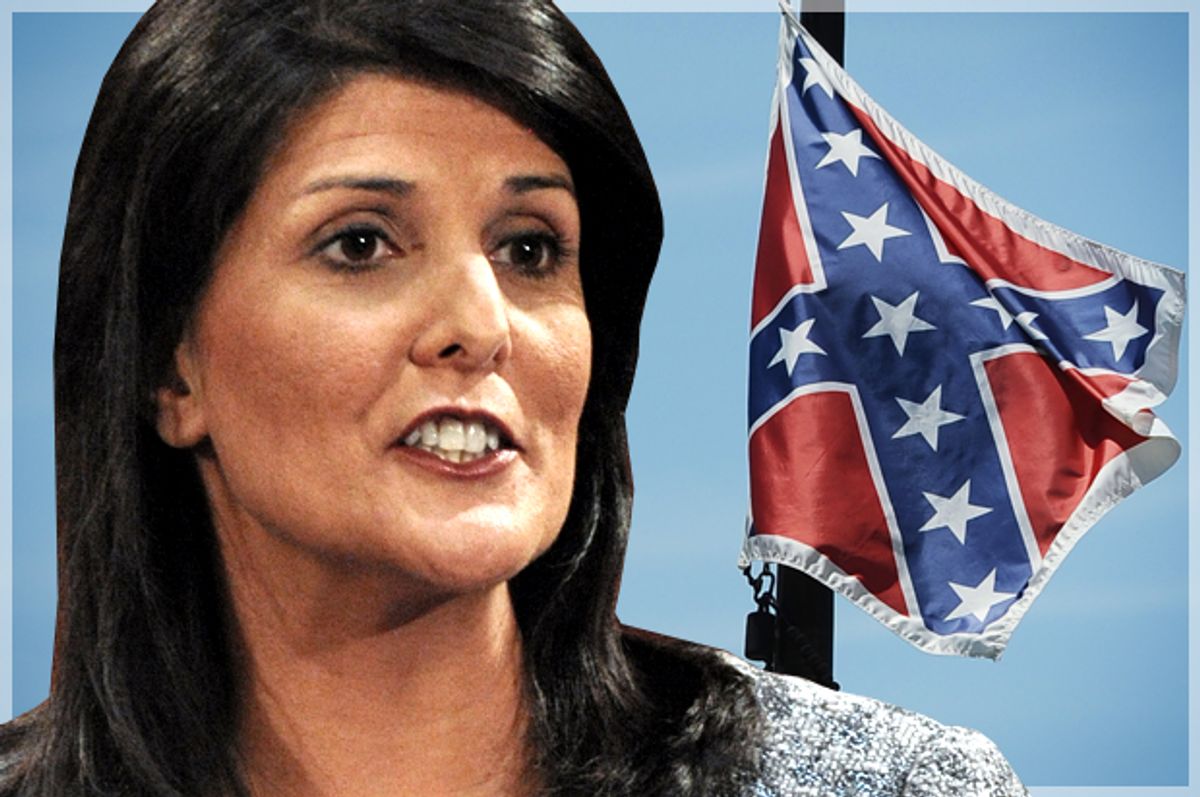 In the wake of an act of domestic terrorism perpetrated against nine black worshipers of the Emanuel African Methodist Episcopal Church in Charleston, South Carolina, the governor of South Carolina is making the news.

The day after the racially motivated shooting at the 199-year-old black church steeped in American history, the Confederate flag flew high and proud in front of the South Carolina statehouse. In 1822, one of the church's co-founders, a free black man named Denmark Vesey, attempted to start a slave rebellion in Charleston. Word of the rebellion leaked, Vesey and five others were judged guilty by the secret proceedings of a city-appointed court and condemned to death. They were executed by hanging on July 2, 1822. In total, the city killed 35 people who were deemed connected to the rebellion planning. The gruesome and violent history of chattel slavery in the U.S. is wrapped in the Confederate flag. It is flown by supporters of racially motivated crimes, white supremacists (historically and today). A jarring number of people claim its historical significance outweighs its symbolism, and the terror and anxiety that rise in the throats of black Americans and people of color throughout the country when they see it fly.

Consequently, many called for the governor of South Carolina to take down this flag in the wake of the murder of nine Black South Carolinians. At a tearful press conference that same day, Haley denounced the tragedy, though declined to recognize it as a racially motivated hate-crime, despite the killer’s confession of it as such. Yesterday, she finally responded to the thousands of calls to remove the flag and recommend that it be taken down and placed in a museum, stating “The events of the past week call on us to look at this in a different way,” and adding that now is the time “to remove the flag from the capitol grounds.” She affirmed her commitment to freedom of expression, and said, “for those who wish to show their respect for the flag on their private property, no one will stop them.” In her remarks, she straddled a line – acknowledging that the flag as a symbol of history, ancestry and respect and how many others find it offensive. Not once in her remarks did she name that the offense in question is systemic racism, chattel slavery and state-sanctioned violence against Black Americans.

She plans to call a special session of the state legislature so that they may vote on removing the flag from the statehouse grounds.

In this moment, Nikki Haley’s ethnicity and heritage are back in the news, and a 2011 story that discovered that Haley identified herself as “white” on her voter registration card in 2001 is circulating again. But Nikki Haley is not white. Born Nimrata Randhawa and called “Nikki,” meaning “small one,” by her family, she was elected South Carolina’s  first female governor in November by the largest margin of victory for a South Carolina gubernatorial candidate in 24 years.

She is the nation's second Indian-American chief executive and the first Sikh governor in the U.S.  Her parents emigrated to the U.S. from India and Haley was born in Bamberg County, South Carolina. In September of 1996, she married Michael Haley -- a captain in the Army National Guard and combat veteran who was deployed to Afghanistan -- in both a Methodist church ceremony and a Sikh gurdwara. Today, she identifies as a Christian. In 2001 she identified as "white" on her voter registration card. And in 2011 Haley was an outspoken champion of legislation designed to prevent voter registration fraud.

The day after the massacre in Charleston, in addition to an emotional press conference, she posted on Facebook, “While we do not yet know all of the details, we do know that we’ll never understand what motivates anyone to enter one of our places of worship and take the life of another.”

Surely, she does. As all of us knew, even before all the facts confirmed it, that this was racist violence. Nikki Haley is not a stranger to racism, herself, and at the hands of elected officials of her own party.

Nikki Haley is not white, but her own political party touts xenophobic, anti-immigrant and racist policies and practices. Some of her colleagues are directly funded by white supremacists. Given the racism inside her party, and the hostility toward non-white immigrants in so many places in the U.S., it’s no wonder that Nimrata Randhawa would find it easier to maneuver the political terrain as Nikki Haley, that the Sikhism she was born into would be much more difficult to navigate than a conversion to Christianity.

As the voter registration story broke for the second time last week, we were reminded of how some South Carolina Democrats questioned Haley's use of "Nikki" as her first name and whether she had changed her first name legally from her birth name. Dick Harpootlian, the party chairman, reminded us that, "Haley has been appearing on television interviews where she calls herself a minority — when it suits her," adding, "When she registers to vote she says she is white. She has developed a pattern of saying whatever is beneficial to her at the moment.” Whether it’s coming in the form of racist slurs from the members of her own party, or the DNC chairman reminding us not to trust her because she flip-flops on race, Nikki Haley has not been able to outrun the racial hierarchy.

Haley is not the first Indian American Republican politician to make such accommodations to her identity. Bobby Jindal, the Republican governor of Louisiana, converted from Hinduism to Christianity and rarely uses his full name, Piyush Jindal. These politicians serve to remind us that the forces for assimilation and eradication of our immigrant heritage are strong here in the United States, but whitewashing isn’t quite what Nikki and Bobby might hope. Aside from skin color, and other physical markers of race, which some of us don’t have the ability to forgo, race in America is anchored to white supremacy. Assimilating into whiteness, by changing our names, our religion and in some cases even our physical appearance (for those who can), may allow some of us to pass for another race, but it does nothing to challenge the very systems of structural inequity that ensure that while we may “pass” we are never far from the consequences of being brought right back into the racial hierarchy. And even if one of us is able to do it successfully, motivated by internalized racism, or as a strategic means to survive, or simply to try to escape racial inequality in our society, it is an effort focused on an individual attempt to navigate a terrible system, and it does nothing for those who cannot pass, or would never wish to. It leaves everyone else to fend for themselves, and elides the responsibility of challenging racism simply by trying to skirt it.

It’s difficult not to think of Rachel Dolezal, whose passing as a black woman has filled headline after headline in recent weeks. Dolezal’s case is particularly instructive, because it demonstrates white supremacy acutely. Dolezal, as a white woman, has been able to don some of the physical markers of blackness and “pass.” But for many black Americans and people of color marked by race, there is no ability to “pass” for white. Whether or not she ever does, Rachel Dolezal can return to the refuge of whiteness, should she choose. And the incessant racism faced by Nikki Haley, from inside and outside her own party, proves that she cannot simply become white, despite what she checked on her voter registration card.

This is why Haley’s failure to acknowledge the racism at play in the Charleston shooting is important. Her own brownness, or attempts at whiteness, mean very little in the face of her words and actions, which consistently downplay racism -- racism that she herself has experienced, and which perhaps have informed her own attempts at assimilation. Her identity as a person of color means very little if she’s unable to articulate it in a way that names and addresses structural racism. She knows the significance of the Confederate flag, and to dismiss that history is an act of willful ignorance, regardless of her race.