The war of Southern digression: Republican 2016 hopefuls sideline themselves on Confederate flag

Marco Rubio, Scott Walker, and others apparently needed political cover before they could denounce a racist symbol 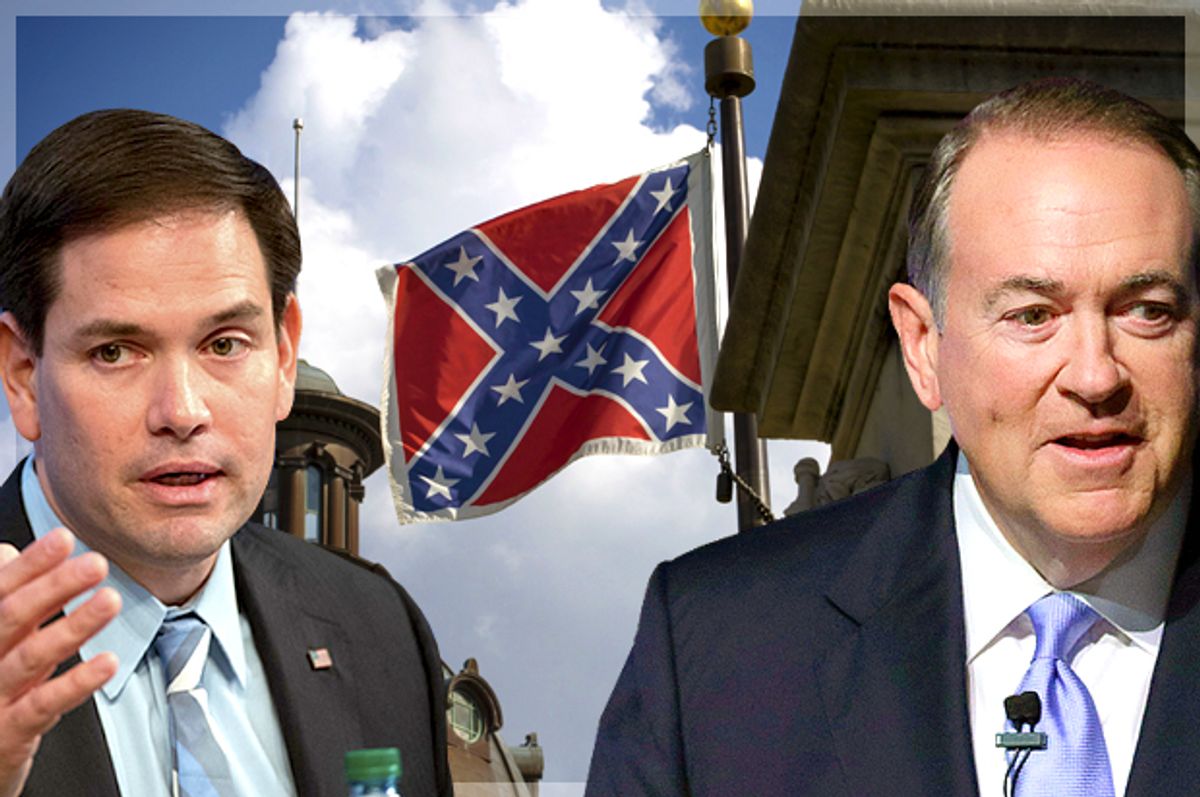 The battle flag of the racist, kleptocratic insurgency that started the deadliest war in American history to defend its practice of keeping human beings as chattel will, hopefully, no longer fly on the grounds of South Carolina’s capital. Gov. Nikki Haley called for its removal after a Neo-Confederate stripling murdered nine people at Charleston’s Emmanuel AME Church and made it impossible for politicians to keep pretending that the flag stands for anything other than racial violence.

While Haley’s call was the right one, it was no act of political or moral bravery, despite what some excitable pundits might think. Just a few months ago she endorsed the flag’s continued presence on her way to reelection. She’s moving against it now only because the most recent act of Neo-Confederate terrorism in the post-bellum South generated sufficient outrage to finally, belatedly force the removal of this foul remnant from the bleakest depths of nation’s history. And even as she called for it to be taken down, Haley insisted that the Emmanuel AME murderer “has a sick and twisted view of the flag,” succoring those who want to keep denying that the stars-and-bars isn’t a symbol of racial oppression.

But Haley was the picture of courage compared to the Republican field of 2016 candidates. As the circumstances of the Emmanuel AME murders came to light and the howling outrage over South Carolina’s display of the Confederate flag mounted, the 2016 Republicans embarked on a determined campaign of mush-mouthed cowardice. When given the chance to reject an anachronistic symbol of racial hatred in the immediate aftermath of a deplorable hate crime, they punted and waited desperately for Haley to give them the political cover they needed to get on the side of common decency.

Wisconsin Gov. Scott Walker (“People want new, fresh leadership with big, bold ideas and the courage to act on it”) actually voted for a resolution to impel South Carolina to ditch the stars-and-bars back in 2000, when the issue came up during the Republican presidential primary. In the aftermath of the shooting in Charleston, Walker offered a weak statement to Buzzfeed calling the “placement of the Confederate flag” a “state issue,” and called on South Carolina’s leaders to “debate” it, but only after an unspecified period of mourning. When Haley called for the flag to come down, Walker got in line behind her.

Sen. Marco Rubio of Florida (“The time has come for a new generation of leaders to guide us in our transition from the past”) served up a heaping bowl of word salad to reporters as they pressed him over and over on whether he thought the Confederate flag should come down. Like Walker, he said the debate and decision should be limited to South Carolina and not influenced by “outsiders.” Once Haley made her statement, Rubio issued his own statement agreeing with the decision: “I applaud Governor Haley for her leadership at this difficult time.”

Former Texas Gov. Rick Perry (“Leadership is not a speech on the Senate floor, it’s not what you say, it’s what you do”) boasted that “we dealt with those [Confederate flag] issues” in his state, but wouldn’t explicitly recommend that South Carolina follow his example. “I think it’s up to the people of South Carolina.” Once the decision had been made without his input, Perry praised it as “an act of healing and unity.”

This same pattern was repeated over and over as candidates refused to take a position on a symbolic issue with a clear moral calculus. Whatever the thinking behind it – wariness over angering voters in an early primary state, unwillingness to confront the reality of persistent racism in America, etc. – it was sufficiently powerful to impel a whole slate of candidates who bemoan the lack of leadership and moral clarity to sit on their hands and wait to be bailed out.

The good news is that the Republican field did finally come around to the correct, non-morally repugnant position. All it took was an act of horrific violence and a bit of political cover for them to jump on the “symbols of racial violence are bad” bandwagon. Great job, guys.