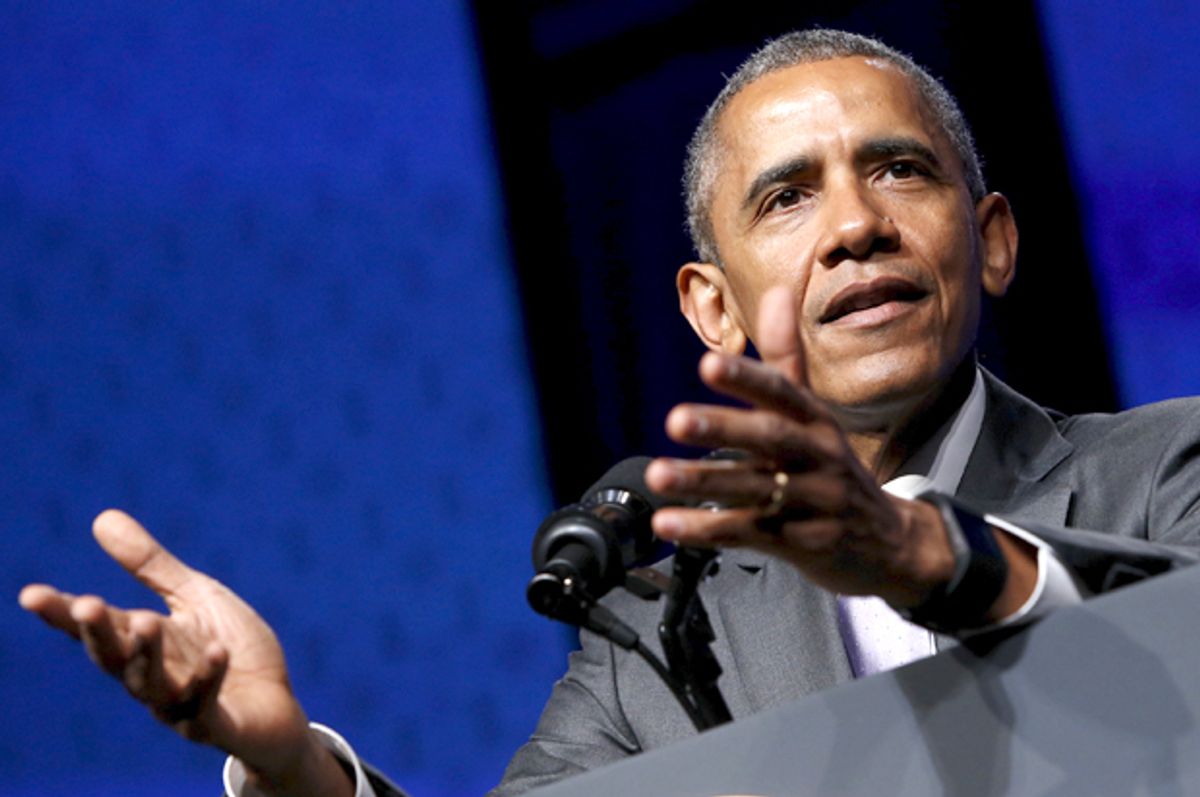 One of the most consistent characteristics of President Barack Obama is his perennial optimism. “The trajectory of this planet overall,” Obama told Vox.com in February, “is toward less violence, more tolerance, less strife, less poverty.” It’s impossible not to see a deeply felt hopefulness as a common thread in Obama’s presidency: In his willingness to bet on Iran’s Ayatollahs, in his eagerness to compromise with House Republicans, in his belief that a trade deal will improve global wealth rather than hurt American workers.

Less clear is whether Obama’s optimism is in fact well founded. Writing in The New York Times on Sunday about Pope Francis, Ross Douthat notes that there’s a bifurcation in “the great argument of our time” between the “dynamists” (who see modernity as essentially improving the world) and the “catastrophists” (who see it as essentially hurtling between crises). The academics appear split: Some highlight the “long peace” over the last 70 years, while dissenting skeptics stress that a longer view of “modernity” must include unprecedented atrocities like the Holocaust and the world wars.

It’s as a key data point in this broader debate, I’d argue, that we must consider the United Nations’ breathtaking report on Thursday about the world’s growing refugee crisis. Read in excerpts alone, the U.N. report might resemble the doomsday prophecies of a Glenn Beck or Paul R. Ehrlich. But it comes instead from the world’s leading governmental authority — not some paranoid fringe — and is supported by reams of well-documented facts. As a result, its claims of a great unraveling in world stability should at the very least give pause to those, like Obama, who contend that the world is inexorably moving toward broader prosperity.

Here are a few of the report’s wrenching details: 1) The number of refugees globally reached an all-time high of 59.5 million individuals in 2014, a 59 percent jump from its 2005 total of 37.5 million; 2) The rate of increase has dramatically increased in the last three years, with a 40 percent jump in the last three years alone; 3) The jump in refugees from 2013 to 2014 was the highest on record; 4) A resurgence of at least 15 major conflicts across Africa, the Middle East and eastern Europe is largely to blame for this increase; 5) An average of 42,500 people fled persecution or conflict a day in 2014, compared to 10,900 a day in 2010. “We are witnessing a paradigm change,” UN High Commissioner for Refugees Antonio Guterres grimly stated in the UN’s press release, “an unchecked slide into an era in which the scale of global forced displacement … is now clearly dwarfing anything seen before.”

Hawkish Republicans will no doubt see the rising refugees crisis as evidence of feckless U.S. foreign policy and call for the reinstatement of the “Pax Americana” as a solution. Yet the UN report itself underscores the very way in which American adventurism has created the power vacuums that eventually force innocent victims to flee their homes. (Afghanistan, for instance, has the world’s “largest protracted refugee situation,” with 2.6 million now living outside their country after decades of war, according to the UN.)

Democrats’ response to the report is also likely to be too simplistic. It would be foolish to imagine, as conservatives do, that a more muscular America could have prevented the long slide of war-torn nations like Syria (the leading source of refugees in 2014, with 3.88 million). But liberals are similarly wrong to pretend the world will rush headlong to a better future if the United States would just get out of the way. All one needs to do is look at the fate of many African countries toward which we have been largely indifferent recently (Somalia, 1.1 million refugees in 2014) to dispel that particular fiction.