With the Confederate battle flag becoming taboo, conservatives are desperately searching for someone to blame 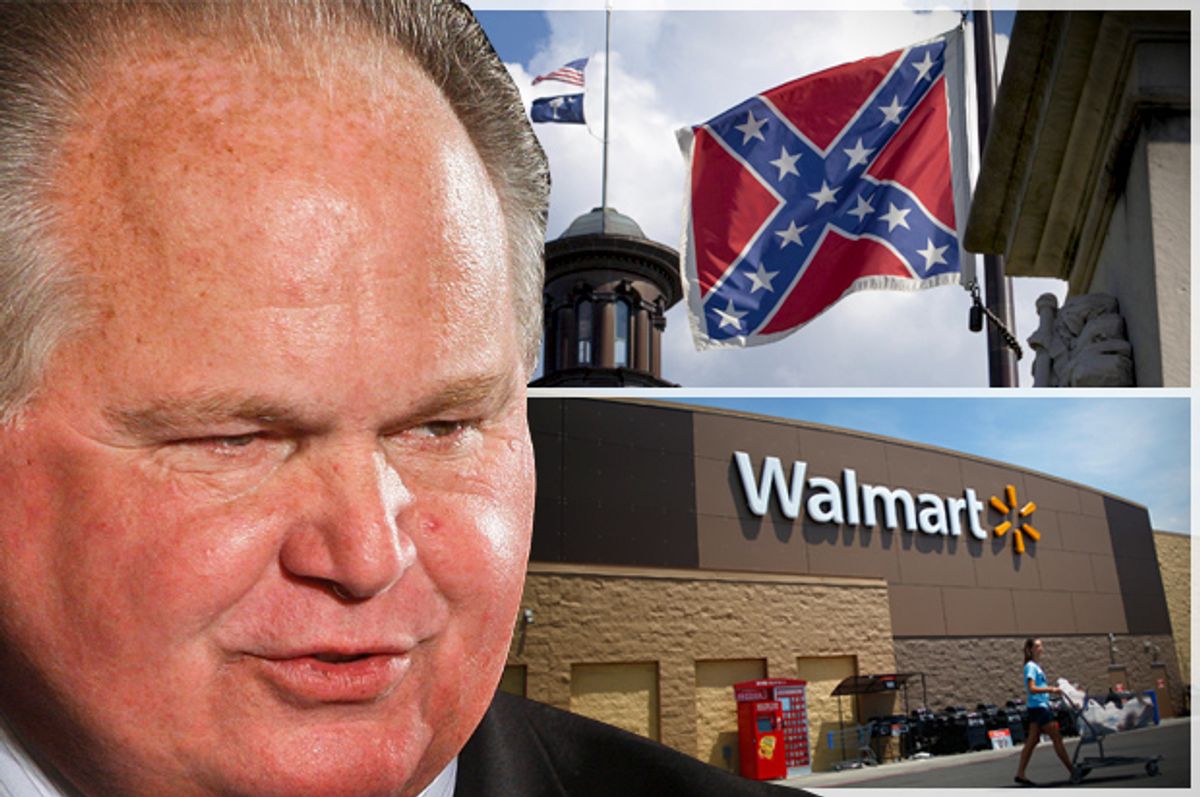 Even before eBay followed Walmart, Sears and Amazon’s lead by banning “rebel-flagged” items from its giant virtual yard sale, I realized that what I was watching was not a typical consumer revolt.

The Confederate battle flag — that bellicose assertion of a Southern “heritage” otherwise known as “white supremacy,” that defiant, “fuck you” of a symbol in whose honor the blood of far more than nine people has been shed — it wasn’t suddenly toxic because of last week’s massacre in Charleston. Multinational corporations, and the politicians they keep on retainer, weren’t disowning the flag because of a popular movement. The people hadn’t had the time to organize. The pavement on this road to Damascus was still wet.

Instead, what was actually happening, behind the scenes, wasn’t nearly so romantic. No one was breaking from their usual habits. Everyone, in fact, was doing what they always did. The profit-seeking entities were trying to maximize future earnings; and the state-level politicians were following their demands. This wasn’t a case of the powers-that-be doing something they resented. No one was pushed here; everyone was ready to jump.

Not for the first time in 2015, the conservative movement has found itself on the losing side of a culture war battle it once routinely won. And just as was the case in Indiana, when a petty and combative anti-gay law inspired national boycotts and a business-sector backlash, movement conservatives cannot fathom how liberals aren’t to blame. It’s conservatives, after all, who man the ramparts to protect capitalism and big business. As he was ranting about “the left’s” war on the Confederate flag on Tuesday, one could almost hear Rush Limbaugh transform into Walter Sobchak from “The Big Lebowski,” bellowing, “Has the whole world gone crazy?!”

He wasn’t alone, of course. And despite what you might expect, his tribal loyalty to the “Stars and Bars” (a misnomer, by the way) wasn’t exclusive to conservatives of his age. A young woman at Breitbart was similarly incensed by the flag’s sudden toxicity, blaming a “howling mob of both liberals and brown-nosing conservatives” for Amazon’s betrayal of the Confederacy’s trademark. A Generation X editor at the Federalist railed against the media for asking businesses if they planned stop selling the flag, calling it “heretic hunting” and activism disguised as reporting. An evidently impatient colleague of hers took it one step further, likening calls against romanticizing the Confederacy to the Nazi regime.

As these spasms of inchoate rage overtook movement conservatives, it was almost funny how desperate they were to find someone — anyone — besides capitalists to blame. Bill Kristol, the self-styled Hébert of neoconservatism, trolled his way to sophomoric analogies involving a Cliff Notes version of the French Revolution; and then tumbled into the 19th century, saying,“today’s liberals would surely have been Copperheads.” One of the lesser lights at Hot Air, Michelle Malkin’s former haunt, provided a nice example of the “whataboutism” that became widespread on the right, asking no one in particular how the Confederacy could be bad so long as angsty teenagers still thought Che Guevara was cool?

Beneath their caterwauling and free-floating resentment, though, conservatives evinced a level of disorientation and fear that was in some ways sympathetic. It was like watching a millenarian sect discover the new Jerusalem was actually a suburban cul-de-sac. If liberals could not be blamed for this new dishonor, if it wasn’t liberals’ fault that the cultural norms of 2015 and 1995 were no longer the same, then what was the answer? Lefties might note how, under capitalism, “[a]ll that is solid melts into air, all that is holy is profaned,” and say that the signifiers of the Confederacy were no different. But that's of little to use to those who'd describe President Obama as a Bolshevik.

Yet for all the right’s professed belief in “common sense,” the reason why businesses were, metaphorically, setting the flag to the flame continued to elude conservatives, even when it was staring them in the face. As CNN, the Associated Press and others reported, the Amazons, eBays, Sears and Walmarts of the world weren’t acting out of fear or sentiment. Their motivations were straightforward, cold, and rational. Walmart wants to shed its reputation as a Red State phenomenon; Sears wants to prove it’s not exclusively for dads; Amazon’s politics are, if anything, probably “liberaltarian”; and it’s hard to imagine eBay’s pro-Confederate market was ever that big.

All of these companies, and the others like them surely to follow, were simply looking at the future; and what they saw was an America where a business implicitly legitimizing the flag had more to lose than to gain. As Jonathan Chait rightly argued, an old understanding of what it means to be American — an understanding profoundly bound to a certain definition of whiteness and constructed on a foundation of racist, revisionist history — is fading. “I know we’re going to lose eventually,” one pro-Confederate South Carolinian told the New York Times. His ranks, and the influence of his kind on the American mainstream, shrink a little more every day.