It's not just talk. Unified Republican control of the government would spell the end of the ACA 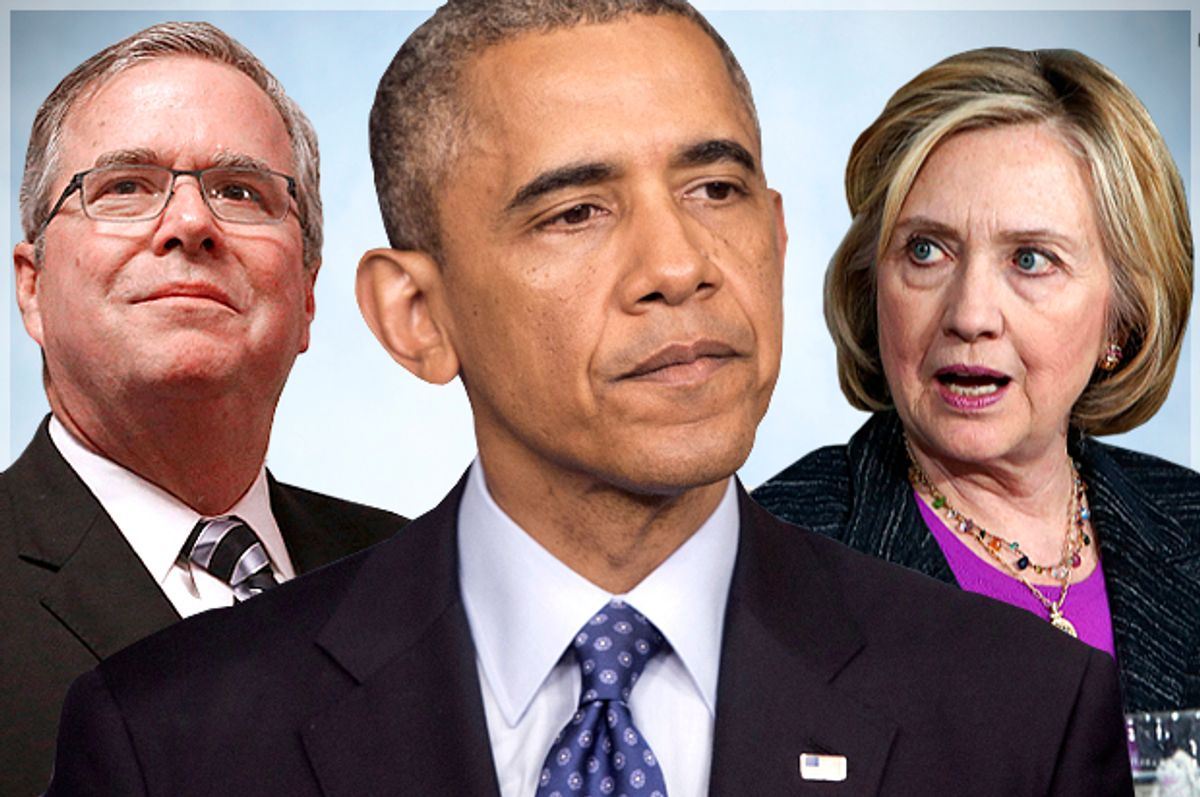 The Supreme Court should -- should! -- be done hearing pesky challenges toward central components of the Patient Protection and Affordable Care Act now. A six-justice majority ruled yesterday that one phrase that was not worded as carefully as it could have been, alas, was not an acceptable excuse for tearing down the whole edifice. As Digby writes, "this outcome shows that a majority of the court is not going to accept any excuse conservative miscreants can find to destroy" the Affordable Care Act.

The major legal threats posed to the law's core structure may have been dispatched. (Knock on wood.) This does not, however, guarantee that "the Affordable Care Act is here to stay," as President Obama declared after yesterday's King v. Burwell decision. Though the law has benefited millions, it is still not very popular, and devotion to its repeal is still an absolute litmus test for Republican candidates to any federal office. Their intentions shouldn't be taken lightly as idle chatter.

The Affordable Care Act's survival hinges on the outcome of the 2016 elections, on whether Republicans can retain the Senate and take the White House.

It's important to watch the little reconciliation experiment underway in Congress right now. The joint budget resolution passed by the Republican Congress this year included reconciliation instructions, i.e., a one-off opportunity to move a piece of legislation through the Senate without threat of filibuster. Republican leaders promised conservatives, in exchange for their budget resolution votes, that they would use this vehicle to move an Obamacare repeal through the Senate. Of course, this won't have any practical effect right now -- our super-knowledgable insider Beltway sources tell us that President Obama would, indeed, veto a bill repealing his signature presidential achievement. But the idea is to show Republican voters the importance of showing up on Election Day 2016: to ensure that a Republican is able to sign such a reconciliation bill produced by the next Congress.

The plan has hit some snags. Republicans' installation of a more conservative economist at the Congressional Budget Office to produce favorable scores of legislation still did not produce a favorable enough ACA score. Keith Hall's CBO, much like Doug Elmendorf's CBO, showed the ACA to be a net deficit-reducer -- under either static or dynamic scoring. For all the outlays in the Affordable Care Act, it hauls in much more revenue. And any permanent legislation passed under reconciliation rules must reduce the deficit.

This is why some are skeptical that the Senate ever could pass a total Obamacare repeal under reconciliation rules. "Repealing all of the health care law through reconciliation is impossible," Roll Call wrote in April. "Reconciliation must be used to effect savings through changing taxes, spending or entitlements. Outside that purview puts it under the normal Senate procedural process."

The amount of pressure that Republicans in Washington are going to face to repeal Obamacare in 2017 if they hold both houses of Congress and the presidency will be extraordinary. A poor score from the CBO and procedural rules will not stop them. If they say, "Ehh, but the reconciliation strictures make it too difficult, so never mind," conservatives will primary every last Republican member of Congress. And I wouldn't blame them.

There are workarounds. They could include another collection of budget cuts in the reconciliation bill that make the overall package a deficit-reducer. (Recall that when Senate Democrats passed a package of ACA tweaks in 2010 through reconciliation, it was paired with the Student Aid and Fiscal Responsibility Act, which improved the overall reconciliation package's score.) They could blackmail/kidnap/fire the Senate parliamentarian until they get the green-light they want. They could also simply abandon the reconciliation process and eliminate the filibuster on legislation altogether.

Republicans could also kill enough of the ACA as permitted under reconciliation to render the law inoperable, after which the only option would be to scrap it and start over. From that same Roll Call piece from April:

G. William Hoagland, a senior vice president at the Bipartisan Policy Center and a former GOP staff director of the Senate Budget Committee for more than two decades, told CQ Roll Call it wouldn’t take much.

“Shoot it full of holes so much that it dies,” Hoagland said. “You don’t have to kill it outright, but you put in on the recovery table and it doesn’t recover.”

Hoagland cited two potential health care law changes that, according to the Congressional Budget Office, could each deliver roughly $1 trillion in savings over the next 10 years: the elimination of state subsidies and the halting of a Medicaid expansion.

This essentially would be Congress doing the dirty work that it hoped the Supreme Court would do in King. It would be unusual to pass a major piece of legislation explicitly designed to total another piece of legislation, so as to then get everyone on board to junk what remains of the totaled legislation. Then again, that's the conservative project in a nutshell: shiv a government program that works, and then when it stops working, argue that the government doesn't do anything well and must be torn further apart.

If there is a Republican Congress and a Republican president in 2017, Obamacare will either be fully repealed or, at the very least, broken beyond repair. This would be fair! I hate to be one of those annoying "elections have consequences" people, but ... consequences: Elections have them. The goofball Supreme Court challenges have receded, but the prospective legislative ones have not.