Short of a constitutional amendment, the decisions spells the end of "religious liberty" in America forever 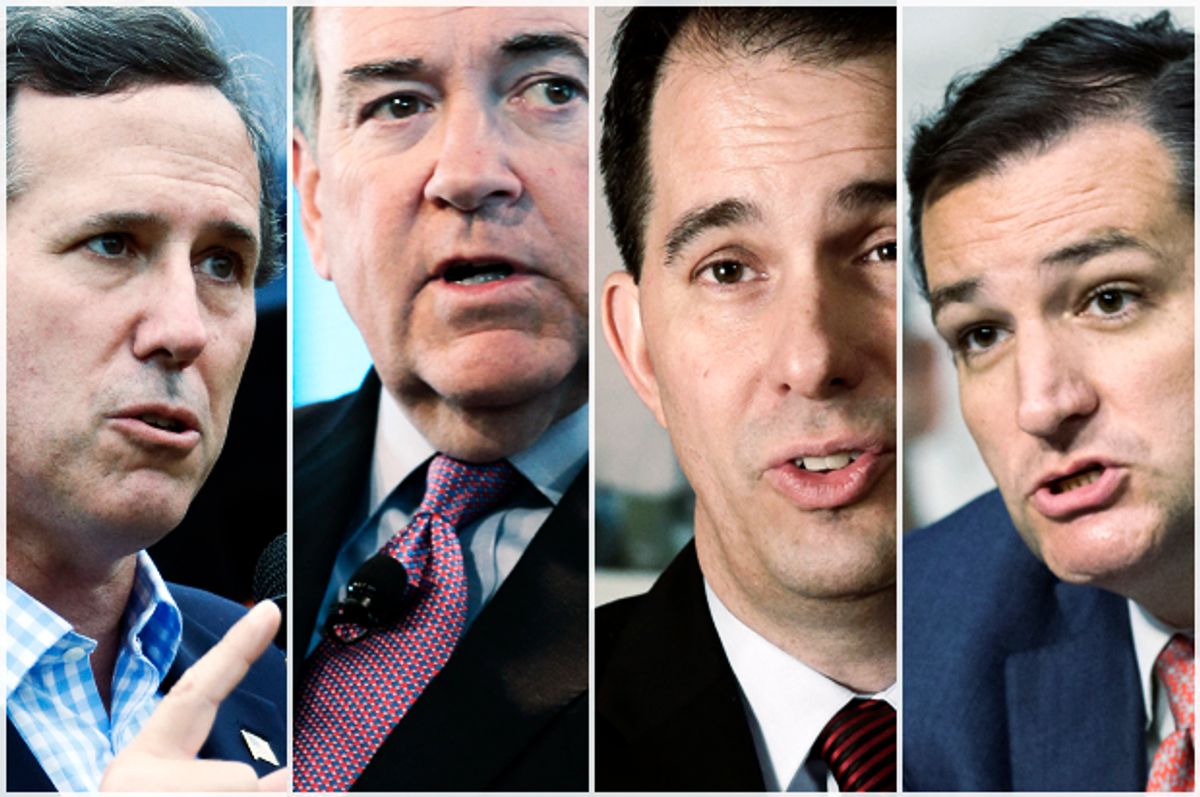 Republican presidential contenders are, not surprisingly, echoing the bitter, bigoted opinions of the dissenting justices. To wit:

"As a result of this decision, the only alternative left for the American people is to support an amendment to the U.S. Constitution to reaffirm the ability of the states to continue to define marriage. I call on the president and all governors to join me in reassuring millions of Americans that the government will not force them to participate in activities that violate their deeply held religious beliefs."

"Guided by my faith, I believe in traditional marriage. I believe the Supreme Court should have allowed the states to make this decision. I also believe that we should love our neighbor and respect others, including those making lifetime commitments. In a country as diverse as ours, good people who have opposing views should be able to live side by side. It is now crucial that as a country we protect religious freedom and the right of conscience and also not discriminate."

"The Supreme Court has spoken with a very divided voice on something only the Supreme Being can do -- redefine marriage. I will not acquiesce to an imperial court any more than our Founders acquiesced to an imperial British monarch. We must resist and reject judicial tyranny, not retreat."

"This ruling is not about marriage equality, it’s about marriage redefinition. This irrational, unconstitutional rejection of the expressed will of the people in over 30 states will prove to be one of the court’s most disastrous decisions, and they have had many. The only outcome worse than this flawed, failed decision would be for the President and Congress, two co-equal branches of government, to surrender in the face of this out-of-control act of unconstitutional, judicial tyranny."

"The Supreme Court can no more repeal the laws of nature and nature’s God on marriage than it can the law of gravity. Under our Constitution, the court cannot write a law, even though some cowardly politicians will wave the white flag and accept it without realizing that they are failing their sworn duty to reject abuses from the court. If accepted by Congress and this President, this decision will be a serious blow to religious liberty, which is the heart of the First Amendment."

"The Supreme Court decision today conveniently and not surprisingly follows public opinion polls, and tramples on states’ rights that were once protected by the 10th Amendment of the Constitution. Marriage between a man and a woman was established by God, and no earthly court can alter that."

"This decision will pave the way for an all out assault against the religious freedom rights of Christians who disagree with this decision. This ruling must not be used as pretext by Washington to erode our right to religious liberty."

"The government should not force those who have sincerely held religious beliefs about marriage to participate in these ceremonies. That would be a clear violation of America’s long held commitment to religious liberty as protected in the First Amendment."

"This is a watershed moment in American history. It's the most egregious rejection of traditional values and the Bill of Rights since Roe v. Wade."

"While I strongly disagree with the Supreme Court’s decision, their ruling is now the law of the land. I call on Congress to make sure deeply held religious views are respected and protected. The government must never force Christians to violate their religious beliefs. I support same sex civil unions but to me, and millions like me, marriage is a religious service not a government form."

"I am a proud defender of traditional marriage and believe the people of each state should have the right to determine their marriages laws. However, the Supreme Court has ruled that state bans on gay marriage are unconstitutional, and I will respect the Court's decision."

"Furthermore, given the quickly changing tide of public opinion on this issue, I do not believe that an attempt to amend the U.S. Constitution could possibly gain the support of three-fourths of the states or a supermajority in the U.S. Congress."

"Rather than pursing a divisive effort that would be doomed to fail, I am committing myself to ensuring the protection of religious liberties of all Americans. No person of faith should ever be forced by the federal government to to take action that goes against his or her conscience or the tenets of their religion."

"While we have differences, it is time for us to move forward together respectfully and as one people."

"As we look ahead, it must be a priority of the next president to nominate judges and justices committed to applying the Constitution as written and originally understood." The next president must "strive to protect the First Amendment rights of religious institutions and millions of Americans whose faith holds a traditional view of marriage."

"I fundamentally disagree with the court rewriting the law and assaulting the 10th Amendment. Our founding fathers did not intend for the judicial branch to legislate from the bench, and as president, I would appoint strict Constitutional conservatives who will apply the law as written."

Senators Rand Paul of Kentucky and Ted Cruz of Texas have yet to issue statements.