"Heaven Is for Real" is lame "heaven tourism," a "divine travelogue for dummies." But not to Sean Hannity! 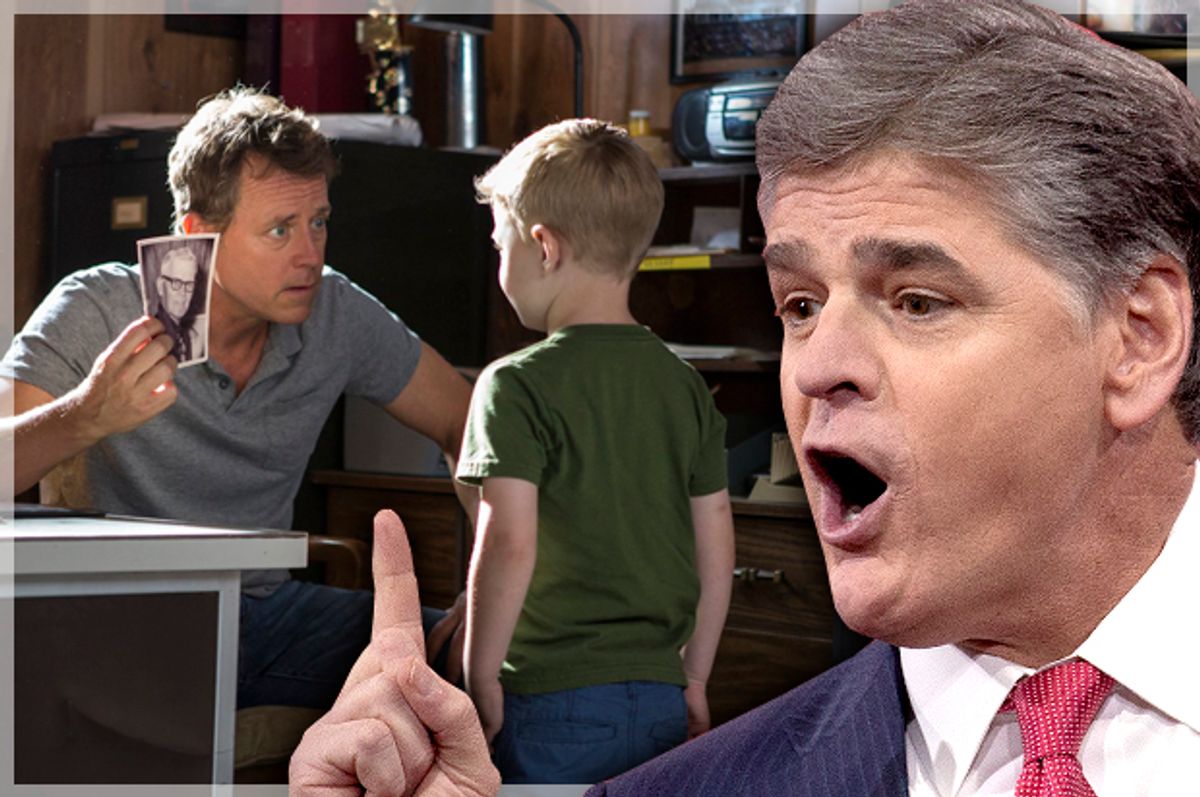 The religious and their cynical Hollywood panderers have offended reason and outraged aesthetics by generating a treacly tale of celestial sojourning so transparently trumped-up that only a fool could fail to see through it. Yet, in so doing, they have exposed the acute faith-derangement syndrome (FDS) afflicting large swaths of the American public and thus, potentially, cleared the way for sanity-inducing treatment.

This week’s essay concerns one Colton Burpo — no, I’m not making up this burbling eructation of a name — and his father Todd and the immensely remunerative product of their collaboration, “Heaven Is for Real: A Little Boy's Astounding Story of His Trip to Heaven and Back.” Based on alleged happenings in 2003, the book hit the stands only in 2010. Todd Burpo, originally (and not incidentally) a cash-strapped Nebraskan preacher, relied on Lynn Vincent (who helped Sarah Palin write “Going Rogue: An American Life”) as co-author to tell the story of Babe Burpo’s putative excursion to paradise and back, and his supernal jaunt’s effect on his family and community.

Todd Burpo’s choice of co-author hints at the credibility we should grant him. Not surprisingly, however, the book the two came up with became a New York Times nonfiction bestseller that sold more than ten million copies. Sony Pictures took note and cashed in, casting Academy-Award nominee Greg Kinnear (“Little Miss Sunshine” and “As Good As It Gets”) as Burpo Senior, and stage actress Kelly Reilly as his wife Sonja, with Colton played by the cherubic (no exaggeration) Connor Corum. The outcome: a shameful waste of celluloid no one involved with should be allowed to live down, but that earned in excess of a hundred million dollars — almost ten times the production budget.  If nonbelievers ever needed proof that divine justice is a cruel myth, “Heaven Is for Real” is it.

I’ll concern myself herein with the movie, which the Burpos helped promote and say is accurate. Though they inhabit a near-palatial home, not much is going well financially with the Burpos in the quintessentially All-American small town idyll of Imperial.  (Hollywood skimped on idylls and actually shot in Canada.)  In fact, they are nearing destitution.  Todd’s job as pastor of the Crossroads Wesleyan Church is just not cutting it. He’s a randy pastor, we see, indulged in hinted-at S&M tendencies by his All-American wife (who happens really to be British). His sermons, however, are of the insipid sort, not spiced up with any of the vicious nonsense bespattering the Bible. (A rationalist viewer wonders why anyone would attend this entirely run-of-the-mill mortal’s homilies at all.) Except for bizarre tarantula-petting sessions, life unwinds in Imperial much as a non-red-stater might expect, with barbeques and softball matches and, of course, lots of neighborly bonhomie, which helps Todd Burpo endure a splintered shinbone, kidney stones and (again, not incidentally) mounting money problems.

Then tragedy strikes. Little Colton begins vomiting and develops a 104-degree fever. Symptoms persist for four full days before the Burpos think to take the delirious lad to the hospital. There they learn his appendix has burst. Orderlies rush him to the operating room. As the surgeons are removing scraps of the exploded organ (a remnant, incidentally, of our Darwinian evolution from herbivores to omnivores), the anesthetized Colton undergoes what appears to be a rather typical out-of-body experience, or so we are at first led to believe.

Colton later provides “evidence” of it; he recounts seeing himself from above, watching his mother in the waiting room organize a communal pray-in to help him recover (a big mistake, research shows), and spying on his father as he rages in the chapel at the imaginary tyrant worshipped by devotees of his chosen Abrahamic cult. Nota Bene: at no time do attending physicians or the Burpos themselves contend that Colton died and was revived. Essentially, the boy does nothing more than talk about what he dreamed while drugged up.

That should have been the end of this story of parental neglect, faith-delusion, bad budgeting and kidney stones. All the more so since none of what Colton dreamed sounded extraordinary; it could have all derived from memories of his daily life, with a pastor father who prayed and a mother who might well have, within his earshot, organized pray-ins. But then, one stormy night, after the Burpos’ discuss money woes, which are so bad mom exclaims “I’m going to have to get a job!” (perish the thought!), Colton says he ranged far and wide while he was out cold, consorting with Jesus and journeying to heaven on Christ’s horse. As the film progresses, it turns out he also encountered a miscarried sister he allegedly never heard of and met Todd’s deceased father. (In another venue, Colton even claims to have conversed with the Almighty Himself, but more on that below.)

Except for Christ’s ungulate, everything Colton describes he could have seen earlier on Hallmark cards or in a picture Bible for kiddies, or learned about from his parents. This includes the stock-image Jesus, of course, who, in his telling, is white, light-eyed and English-speaking. Not a shred of evidence shows Jesus even existed, but if he had, he would have likely sported a duskier Mediterranean complexion, curlier and darker hair, and spoken not Midwestern American English, but Aramaic and some Hebrew.

Herewith begins the film’s internal inconsistency, nay, incomprehensibility. Colton’s regurgitation of all this pop-Christian rubbish astounds and even disturbs Todd so much that he seeks succor from a psychologist. (Of course, he rejects her rational explanations). Todd then complains to his banker (we are never allowed to forget he’s broke) that “We ask these kids to believe this stuff” — about heaven and God — “and I don’t even know if I believe it myself . . . the Bible tells us to believe as children.  What my child’s tellin’ me could get me laughed out of this town.” Later, in church, still discombobulated, he voices his doubts to his incredulous “flock;” one of them, disturbed by all this ungainly talk of Colton’s purported visit with the Godhead, bleats, “Good lord, what’s happened to our preacher?”

Here a rationalist has to wonder, what sort of pastor is this? He’s worried at being laughed at for professing actual belief in the gross balderdash tales that are his faith’s stock and trade? You can already surmise the calculating justification for such a scene: the producers (and Padre Burpo himself, surely) want us to see Colton’s “evidence” as so compelling that it convinces even a doubting Thomas (or doubting Todd, as the case may be), who just happens to be a preacher himself — the very one who taught the little boy the selfsame balderdash tales in the first place. We can only conclude from his confession that he spent his prior career willfully misleading his parishioners, which hardly attests to his integrity, to say nothing of his credibility — the one quality on which the film and the book hinge.

The rest of the film covers Todd Burpo’s stumblebum journey back to the faith we must presume he never really had. “God loves you” is his overriding message to his flock. A mass hug-in ends the final scene in the church.

A slash or two of Occam’s razor judiciously applied to the Burpo “enigma” and all becomes wondrously clear. The most obvious (and charitable) assumption: Colton had a dream and recounts the dream, confusing it with reality, as any four-year-old might.  Penniless Padre Burpo, sensing lucre, then takes what Colton tells him, contacts publishers and ... you can supply the rest of the story. In any case, the Burpo clan and their associates hit the FDS jackpot. No surprise there: seven out of ten Americans still call themselves Christians, and they are known to donate oodles of their hard-earned income to God-peddlers of all stripes. Spending a mere fifteen dollars on a book seems like a low-cost way to “reconnect with their faith.”

The Burpos’ pecuniary bonanza surely allows them to laugh all the way to bank at the evangelicals who have objected to “Heaven is For Real,” calling it out as a huckster’s tale belonging to the shockingly popular literary genre the Christian blogger Tim Callies called “heaven tourism." Short of pulping these sanctimonious “divine travelogues for dummies,” there is nothing to be done with them.

Well, almost nothing. “Heaven Is for Real” gave Fox News host Sean Hannity a chance to wax pious while displaying the quasi-infantile gullibility characterizing the believers of Abrahamic superstitions. He interviewed Father and Son Burpo on his show, along with Randall Wallace, the director.

Calling the film “a heartwarming blockbuster hit about faith and family,” Hannity first lauds Wallace, who also wrote the script for (the wildly ahistorical) Mel Gibson hit “Braveheart.” Minutes later, Hannity turns to Colton, now a teenager, who describes his “trip to heaven.”

“Heaven is such an amazing place,” he says matter-of-factly. “You just wanna be there, for a long time. I mean, I didn’t wanna come back.”

Hannity requests more specificity. Colton obliges with a description of what the film shows, adding that he was in heaven “physically ... you do have your own body.” But “if you die an old man or an old woman, you’ll be in heaven in your prime, like late twenties, early thirties.” He says he met Jesus, in a “humanoid version, he’s the one you can relate to, because he loves you so much,” but he’s a humanoid you can walk with and talk to. What, asks Hannity earnestly, did God’s only begotten humanoid tell him? “God has not allowed me to remember what Jesus has taught me,” Colton replies flatly.

Hannity then segues to the Lord, and asks Colton what He’s like.

“Well, God the father is just so huge. There’s nothing to compare Him to. He’s big enough to fit the whole world in His hand.”

“How can you see that? You actually saw that?”

“Honestly, I don’t know how to describe it.”

For affirmation, Hannity turns to Burpo père, who offers the jarringly untrue, self-serving observation that “when you have a four year-old, there’s no way that they have the capacity to take you on long journeys, and make up things, and you not to be able to know that they’re making it up.” He then blurbs the flick: “I think this movie will do great because you’re gonna see in this little boy on the screen pretty much what I saw eleven years ago.”

“Does everybody go to heaven?” Hannity asks Colton.

“No, not everybody does go to heaven.” Why? “Everybody there loved Jesus ... once we love Jesus, it’s easier to let [material things] go, and we can enter heaven."

Having expressed not an iota of skepticism, Hannity ends the interview.

The evangelicals who raised such a fuss about l’affaire Burpo were obviously right to do so. Now they would do well take a close look at their own beliefs. Faith-derangement syndrome is, after all, a folie à deux, and they suffer from it as well. But a little clear-headed adult thinking would cure it in no time.

As for “Heaven Is for Real,” nothing will redeem it.