Another way Hollywood is just gutless: Why the film industry is scared of gay characters

Why can't movies do as well as TV when it comes to LGBT characters? 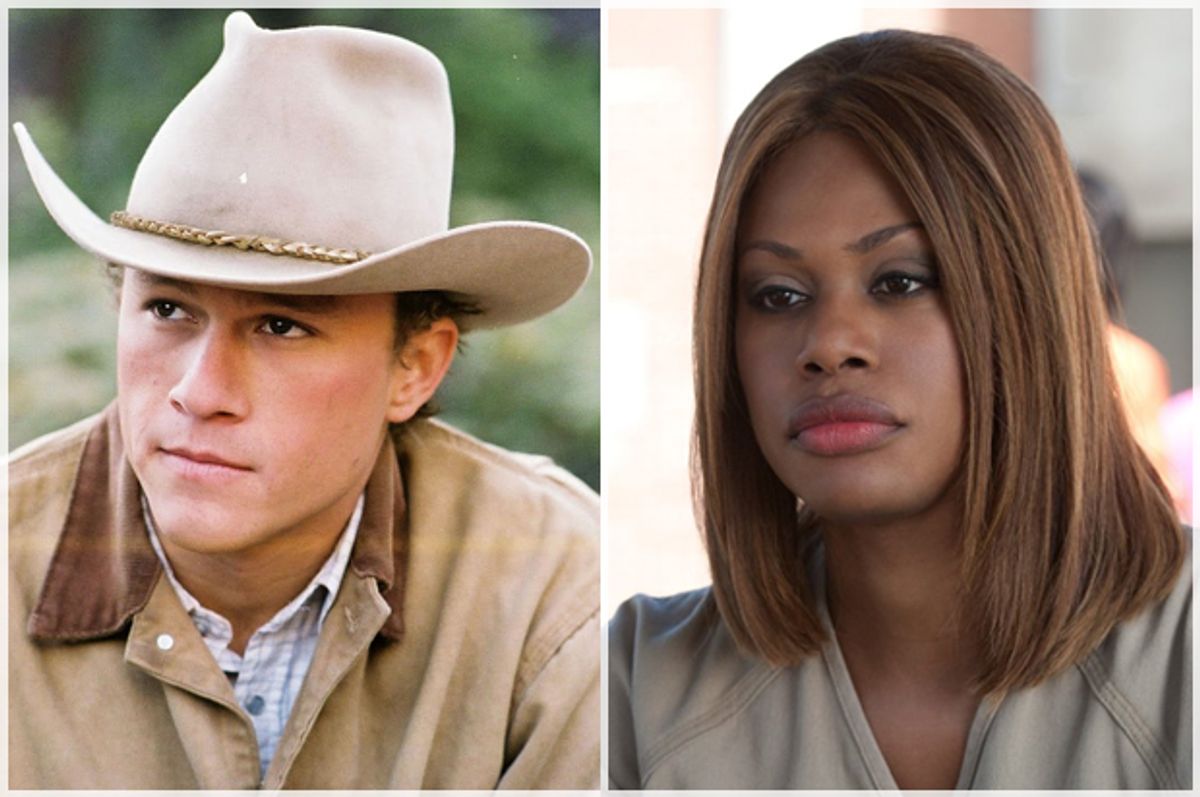 For the last few years, it’s become clear that the center of gravity in American entertainment has been moving from movies to television. Writing talent is migrating to TV as Hollywood films get more chained to formulas and sequels. Audiences dig deep into shows like “Mad Men,” “Homeland,” “Breaking Bad” and a dozen others that engage with social and political issues. Showrunners have become the kind of auteurs that we saw in American maverick cinema of the ‘70s. OK, you knew all this.

But another place, it turns out, where cinema seems to be lagging TV is in its depiction of gay and lesbian characters. This is despite the fact that the nation as a whole has become more progressive on issues of sexuality, that Hollywood is supposedly, erm, “liberal” and that at least a handful of powerful movie executives – David Geffen most famously – are gay themselves. Yet movies like “Brokeback Mountain” remain few and far between, while TV offers at least two whole series – “Orange Is the New Black” and "Transparent" – in which homosexuality and transsexuality are major themes, and other shows – “Mad Men,” “The Wire,” “Modern Family” – in which gay and lesbians characters come and go.

And why is that? Basically, because despite their lip service, many of the men holding the real power in Hollywood are gutless weasels. An otherwise smart and well-reported new story in Variety will tell you a lot of the cause and effect of this, but it won’t come down and say it: Small-mindedness is allowing an important part of the American experience to be overlooked in movies even while it becomes less and less taboo not only on television but in mainstream politics.

The Variety story describes closeted stars, homophobia in the business, and missing gay characters, concluding that “as with everything in the entertainment business, much is due to economics.”

As the story reports:

Steven J. Ross, who wrote the book “Hollywood Left and Right: How Movie Stars Shaped American Politics,” stresses that Hollywood consists of two distinct parts — “and the creative side is far more liberal than the corporate side.” But it’s the latter that controls the purse strings.

With so much money at stake, movie studios are fearful of alienating even a portion of the audience. Executives too often make decisions based on a preponderance of past success; the mantra seems to be “If it isn’t what usually works, let’s not try it.” It’s a mind-set that becomes self-perpetuating, and even global hits like “Brokeback Mountain” ($178 million worldwide) are written off as flukes.

“Over the past few years, we’ve seen LGBT representation on TV evolve to more accurately reflect its audience and our culture, with diverse programs like ‘Empire’ and ‘How to Get Away With Murder’ also becoming some of TV’s biggest hits,” Ellis says. “The film industry, on the other hand, lags years behind — and must improve its track record on diverse representations if it is to stay relevant to a wide audience.”

TV has gotten bolder due to channel growth and the need for more content. “TV has evolved more quickly than we expected,” says Stephen Tropiano, author of “The Prime Time Closet” and a professor at Ithaca College. Tropiano points out that “in the post-Ellen era, there are many LGBT characters in all genres — comedy, drama, reality.”

In the 114 features that GLAAD tracked in a study, 20 had at least one LGBT character, and half were on-screen for under five minutes. A lot of them were there to serve as comic relief.

Other shifts in the culture of Hollywood may be responsible as well. The move toward action movies, superhero shlock, and dumb, big-budget thrillers as the industry goes more corporate doesn’t quite open the door to a lot of nuanced gay characters.

Another element the Variety story doesn’t mention except in passing is the internationalization of audiences for American film. The enormous audiences for Chinese and Russian movies – new IMAX and 3-D cinemas are sprouting up overseas, and Hollywood increasingly caters to audiences outside the U.S. – also gives studios less incentive to get into topics and characters that might turn off audiences in more socially conservative countries.

The bottom line is that for all the LGBT benefits movie people hold in their hillside homes, the old line about the movie colony still stands: The only color that counts in Hollywood is green.

Of course, it’s not as if every movie needs to have a gay subplot or a visibly gay character. But given the huge number of films Hollywood churns out every year, the movie industry reminds us just how irrelevant and out of touch it’s getting.