"Boycotts and divestments are not anti-Semitic": Organized religion takes up the BDS fight

The BDS debate can no longer be dismissed as just a campus movement. Even the Vatican has recognized Palestine 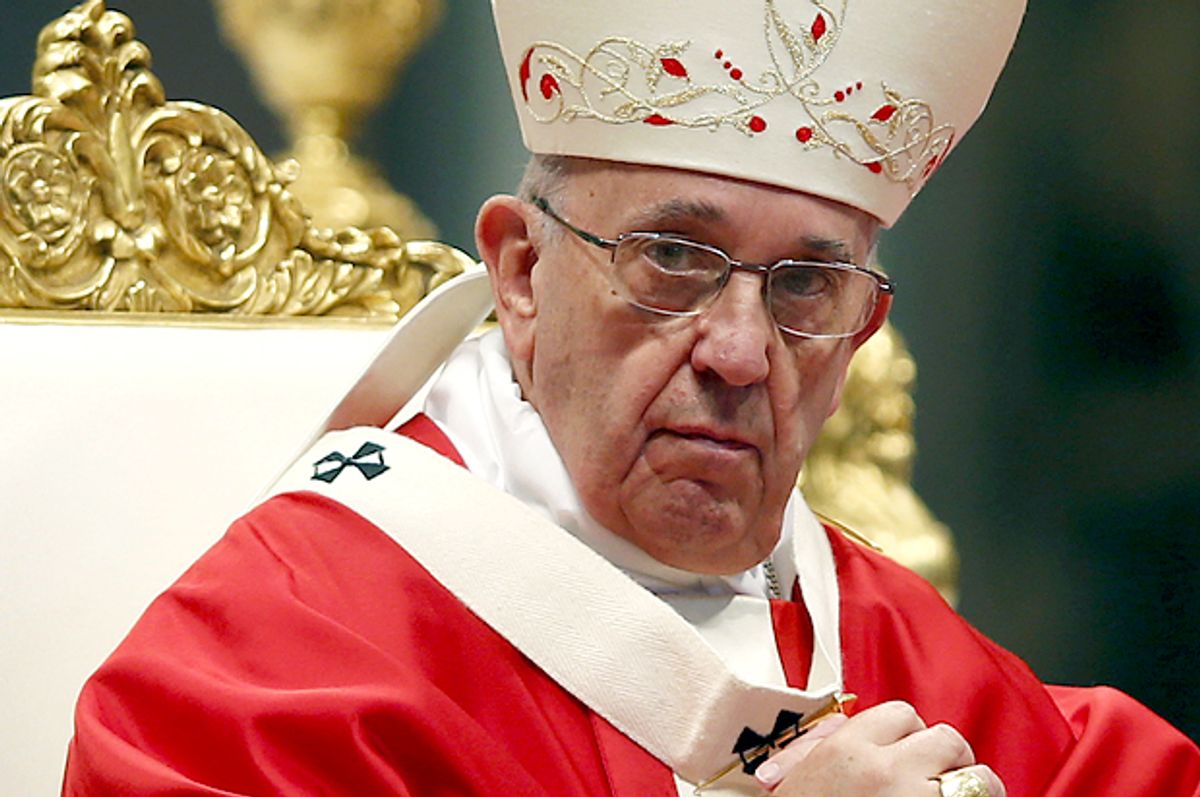 For a long time, the significance of the Boycott, Divestment, and Sanctions movement (BDS) was downplayed—it was regarded by many as being “merely symbolic.”  But now, coming up on the 10th year of its founding, this nonviolent form of lawful protest and advocacy for Palestinian rights has been determined by the Israeli government and also by the U.S. Congress to be a highly significant force.  Netanyahu has numerously denounced BDS as a “strategic threat.”  As the Guardian notes:

Using language the Israeli government usually reserves for the likes of Hamas or Iran’s nuclear programme, senior figures – including the prime minister, Binyamin Netanyahu, and a key backer in the US, casino magnate Sheldon Adelson – have turned on the movement, which is prominent on university campuses and among international trade unions.

And the Senate has recently passed a trade bill that contains a condemnation of BDS.

But now deep concern over Israeli state policies has moved well beyond university campuses and international trade unions—the debate has moved into the sphere of organized religion.  Just this week the Vatican recognized the state of Palestine and signed a treaty with it:

The Vatican’s foreign minister, Archbishop Paul Gallagher, said the agreement could be a “stimulus to bringing a definitive end to the longstanding Israeli-Palestinian conflict, which continues to cause suffering for both parties.”

He also called for the two countries to take “courageous decisions” so that the “much desired two-state solution may become a reality as soon as possible.”

And the injustices and human rights violations occurring in Israel-Palestine are also being energetically discussed within U.S. religious organizations.

Almost exactly a year ago, in June 2014, the General Assembly of the Presbyterian Church (USA) passed a very narrowly tailored divestment resolution by the slimmest of margins, and the United Methodist Church voted to divest from G4S, “a British company highly complicit in Israel’s military occupation of Palestine profiting from gross human rights violations against Palestinian political prisoners, including child prisoners.”

But that was before the horrific attack on Gaza last summer, which brought the conditions of the Occupation before a world audience, and prompted protests from around the globe.

Now, in a critical development, serious and sustained discussion of divestment and boycotts will go on within two important churches.  First, the United Church of Christ is debating a resolution at this year’s General Synod in Cleveland (June 26 -30).  John H. Thomas, former general minister and president of the United Church of Christ, writes this in favor of the resolution:

Elderly Palestinian women shouldn't have to stand in long lines between metal gates while armed soldiers younger than their grandchildren eye them with hostility. Farmers shouldn't have to wait for security gates to be opened so they can get from their homes to work their olive orchards. Families shouldn't have to endure garbage dumped on them by Israeli settlers who have illegally commandeered homes above them.

Children shouldn't have to be dependent on the whim of government officials to be permitted to travel for critical medical care in a first-rate hospital.  People shouldn't have to gaze across high concrete walls to glimpse gleaming cities being built for strangers on land their grandparents and great-grandparents once farmed.

None of this should happen.  Yet it does every day for Palestinians who have lived for nearly 50 years under Israel's military occupation without freedom and without equal rights.  I've seen all of this and more myself over the course of several visits to the church's Palestinian and Israeli partners.

And these on-the-ground Palestinian realities are why the General Synod of the United Church of Christ is considering in Cleveland this week a strong resolution calling for its members, congregations, and national ministries to join an international movement of churches and civil society groups pressuring Israel to negotiate a just and fair peace agreement.

Crucially, Thomas points to the precedents for such action:

Carefully targeted boycott and divestment strategies are extraordinary actions for the church, but not unprecedented.  In the past, the UCC has engaged in these tactics to support migrant farm and textile workers, to change corporate policies dangerous to poor mothers and their infants, to press for the end of apartheid in South Africa, and to reduce reliance on climate-damaging fossil fuels. At a time when deep discouragement over the prospects for peace threatens to overwhelm, this resolution before the Synod signals a refusal to surrender faith in the God who promises courage in the struggle for justice and peace.

Peace requires action. When governments are unwilling, other tactics become necessary. The United Church of Christ is about to consider a resolution concerning boycotts and divestment from companies that profit from Israel’s occupation of Palestinian lands. The Presbyterian Church USA and the United Methodist Church have passed similar resolutions. These are part of a wider campaign of boycotts, divestment, and sanctions (BDS) that is gaining traction throughout the world.

Boycotts and divestments are not anti-Semitic. Those strategies are born from understanding the ethical dimensions of all three Abrahamic faiths and the experience of other historic movements against oppression that have used those methods to leverage social change. We support justice that will lead to peace.

The Episcopal Committee for Justice in Israel and Palestine is also discussing a resolution at the Church’s General Convention in Salt Lake City (June 25 - July 3).  Newland Smith, a member of the committee, writes in an Op-Ed:

Three resolutions will be debated at this week's General Convention that call for action on divestment from certain companies that profit from and enable Israel's occupation. One of these resolutions, proposed by the Episcopal Committee for Justice in Israel and Palestine, calls on the church to move its internal process forward by taking measured steps toward divesting from companies considered to be the most egregious supporters of the infrastructure of Israel's occupation.

In a statement of support for the committee's resolution, Archbishop Emeritus Desmond Tutu, one of the heroes of the struggle against apartheid in South Africa, recognized the important role boycotts and sanctions played in his country's struggle for freedom and equality, and of the moral duty of Americans to "recognize your own country's complicity in Palestinian suffering under occupation and of your investments that undergird that suffering."

Taking such a step toward divesting from Israel's occupation will align our investments with our principles and serve, along with the actions of other churches and institutions, including a growing number of Jewish organizations and voices in Israel and the U.S., to help exert pressure for a just and peaceful end to the destructive status quo of permanent occupation.

A number of things are striking with regard to these new discussions.  First of all, discussions of these resolutions are being placed at the center of these conventions—the issue of Palestine is clearly of the greatest importance not only on our college campuses, where we can applaud the ethical fervor of young people, but also within our religious organizations, which are endowed with a certain moral authority.  It has been too easy for the BDS movement to be dismissed as merely the concerns of immature, impressionable youths, or of “liberal” or “radical” professors in the Ivory Tower.  The fact that these church leaders have seen firsthand the horrors and injustices of the Occupation and now wish to have their churches take action speaks volumes.

But critically important as well is the fact that, as Desmond Tutu’s statement reveals, this movement both reaches across the globe, and also taps into a powerful history of social justice activism, including most particularly the civil rights and anti-apartheid movements.  There, too, progressive church members were at the vanguard. The fact that these churches are having these conversations now shows an exponential advance in the cause of the Palestinians, regardless of the outcome of the votes that will take place at the end of these sessions.

For one can be sure that, as all struggles go, there will only be more activism, more energy and greater efforts.  There simply is no turning back the tide.  Our governments have failed us in this regard, but it has always been the case that social justice has come from the grass roots first, against entrenched interests acclimatized to injustice.  And the grass roots now include an important diversity of actors in civil society.

UPDATE: Today the United Church of Christ announced the result of its vote on boycotts and divestment:

"The United Church of Christ Palestine-Israel Network (UCC PIN) is pleased to announce that today the plenary of the 30th General Synod taking place in Cleveland passed Resolution #4, calling for boycotts and divestment from companies that profit from Israel’s occupation of Palestinian lands.”  The vote was 508 Yes, 124 No, and 38 Abstentions.

UPDATE II: On July 2 the Bishops of the Episcopal Church voted down the resolution for divestment. The group presenting the motion issued a statement, which reads in part:

"The Episcopal Committee for Justice in Israel and Palestine looks forward to continuing our efforts to advance a just and lasting peace in the Holy Land at the Episcopal Church’s next General Convention, following today’s decision by the House of Bishops not to approve resolution D016. The Committee notes with optimism that although D016 did not pass today, the fact that it was debated and voted upon is a step forward, as a similar resolution was tabled at the previous Convention without discussion."