GOP declares war on the Supreme Court: What's really behind the reactionary plot against the judiciary

There's some serious conservative rage to be leveraged right now, and Ted Cruz is leading the pandering contest 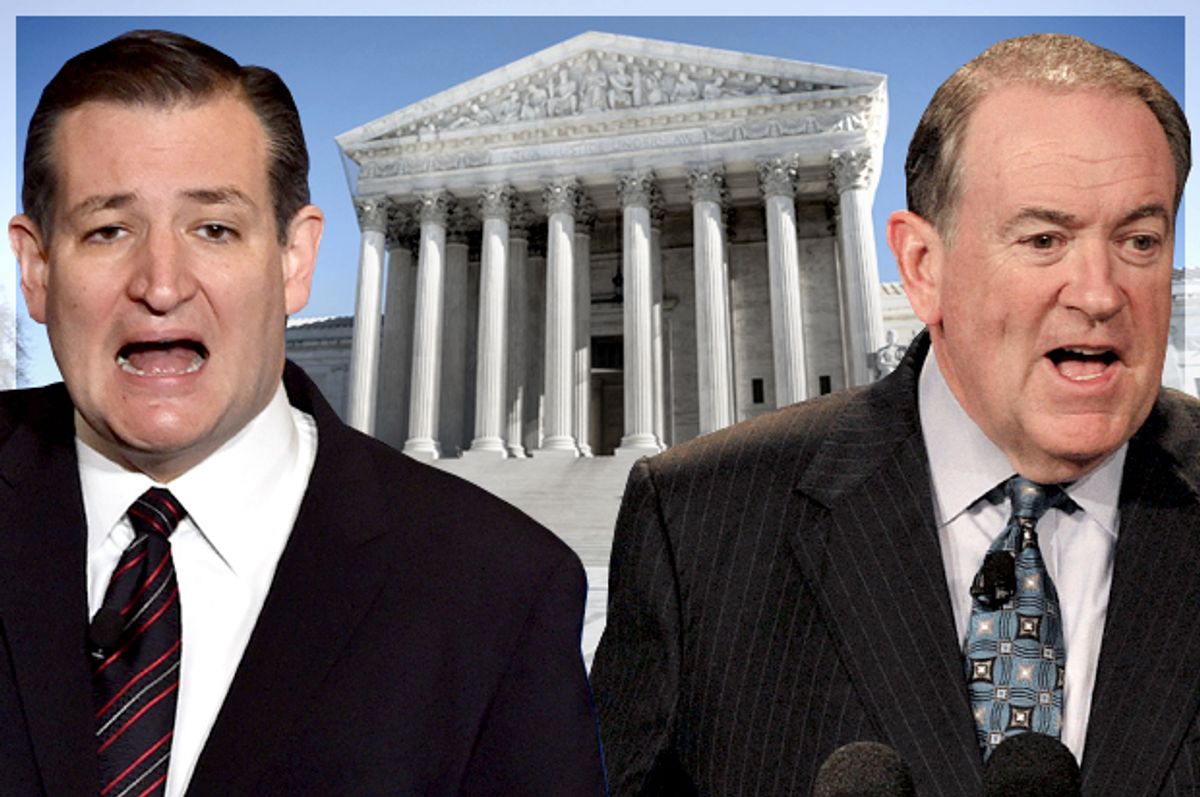 My God, they are so mad. Isn't it great? Scott Walker and Mike Huckabee are still talking up constitutional amendments banning same-sex marriage. Bobby Jindal is suggesting  (jokingly) (???) that "if we want to save some money, let's just get rid of the court." And now Jeb Bush is in even more trouble with conservatives because his brother appointed John Roberts, who has now written a whole two (2) opinions over the course of 10 years that conservatives don't care for.

But the candidate who's most successfully leveraged apocalyptic conservative outrage to his advantage in the hey-look-at-me competition has been our main man, Ted Cruz.

Is Ted Cruz feeling a little ... left behind? Here's a fellow who gets the chills when the camera flash turns from him to anyone else. He declared his presidential candidacy more than three months ago, and in the meantime, a dozen other jokers bearing neither the lofty principles nor sharp, double-Ivied intellect of Ted Cruz have joined him in competition. The nerve of it all.

What the hell, Mike Huckabee, Bobby Jindal, Donald Trump? How dare you vie for the mantle of most outlandish nutso person in your own desperate, doomed-to-fail bids? That's Ted Cruz's "lane." Cruz's whole thing is about serving as the principal vessel for the raging underbelly of American conservatism. He's the one who is constantly trying to shut down the government and/or default on federal debt payments in the service of repealing some law or another that he doesn't like. That's his thing. Step off.

In an effort to reclaim his status as chief reactionary, Cruz has distinguished himself as the most hyperbolic reactor to last week's Obamacare and same-sex marriage Supreme Court decisions. Cruz, who has been conjuring the threat of "mandatory gay marriage" in recent months, added a new line to his repertoire following the Court's one-two punch: that these represent "some of the darkest 24 hours in our nation’s history." (The quote as first reported omitted the "some of" part -- that Thursday morning to Friday morning represented the darkest 24 hours in history. Typical lamestream media, hearing what it wants to hear. Instead of saying that the Supreme Court's decisions allowing low-income people to maintain health insurance and gay couples to wed were worse than Pearl Harbor, Antietam, 9/11, the Cuban Missile Crisis, etc., Cruz was simply saying that the decisions were on par with those other calamities. Can this be denied?)

The decisions also gave Ted Cruz the opportunity to introduce another constitutional amendment. That the current composition of the Court would abandon its constitutional duty to do whatever Ted Cruz wants them to do (this is the only proper originalist reading of Article III) means there's only one option left: voting the bums out.

"Not only are the Court’s opinions untethered to reason and logic, they are also alien to our constitutional system of limited and divided government," Cruz opines in a slightly overwrought National Review essay. "By redefining the meaning of common words, and redesigning the most basic human institutions, this Court has crossed from the realm of activism into the arena of oligarchy." The only remedy, to Cruz, is "[r]endering the justices directly accountable to the people." He suggests following the lead of states that have instituted judicial retention elections.

In California, the people said enough is enough in 1986, and removed from office three activist justices who had repeatedly contorted the state constitution to effectively outlaw capital punishment, no matter how savage the crime. The people of Nebraska likewise removed a justice who had twice disfigured that state’s constitution to overturn the people’s decision to subject state legislators to term limits. And in 2010, the voters of Iowa removed three justices who had, like the Supreme Court in Obergefell, invented a constitutional right to same-sex marriage.

Judicial retention elections have worked in states across America; they will work for America. In order to provide the people themselves with a constitutional remedy to the problem of judicial activism and the means for throwing off judicial tyrants, I am proposing an amendment to the United States Constitution that would subject the justices of the Supreme Court to periodic judicial-retention elections. Every justice, beginning with the second national election after his or her appointment, will answer to the American people and the states in a retention election every eight years. Those justices deemed unfit for retention by both a majority of the American people as a whole and by majorities of the electorates in at least half of the 50 states will be removed from office and disqualified from future service on the Court.

Cruz dismisses the mechanism the Constitution currently provides against "judicial tyranny" -- impeachment powers -- as impractical. Yes, here is Ted Cruz, the fellow who sees every appropriations or debt ceiling bottleneck as an opportunity to eliminate the Affordable Care Act, whose answer to every bad news cycle for conservatives is a newfangled constitutional amendment that would go nowhere, citing the lack of Senate votes as the reason why a certain tactic wouldn't work. "A Senate that cannot muster 51 votes to block an attorney-general nominee openly committed to continue an unprecedented course of executive-branch lawlessness," he writes, "can hardly be expected to muster the 67 votes needed to impeach an Anthony Kennedy." If 67 votes cannot be mustered to impeach Anthony Kennedy, then perhaps Anthony Kennedy should not be impeached.

I do not understand judicial elections. Never have. It's one of those concepts that when I hear about it I can't believe it actually exists in the world, so obvious is the conflict of interest it introduces for judges. The instances he lists of supposedly reasonable cases where judges have been removed strike me as further proof that judicial elections are a terrible, terrible idea. There is a case to be made that lifetime appointments are also silly. Consideration of term limits is a worthy discussion, though the details would be critical: some sort of staggered structure allotting for new appointments every so many years, so one president from one party doesn't get to name a handful of justices while the next president gets to name zero. Whatever.

But this is probably the best case against Supreme Court retention elections: a presidential candidate who needs attention and thus makes the tactical decision to capitalize on partisan insta-rage over a couple of unfavorable decisions to boost his own standing within a competitive field is the one proposing them. Unlike Ted Cruz, I don't presume to know what the Founders would think about any given situation in 2015, but this latest gambit from Cruz seems to validate their decision to keep Supreme Court justices at a safe, though not total, remove from political meddling.