There's no harm in dreaming 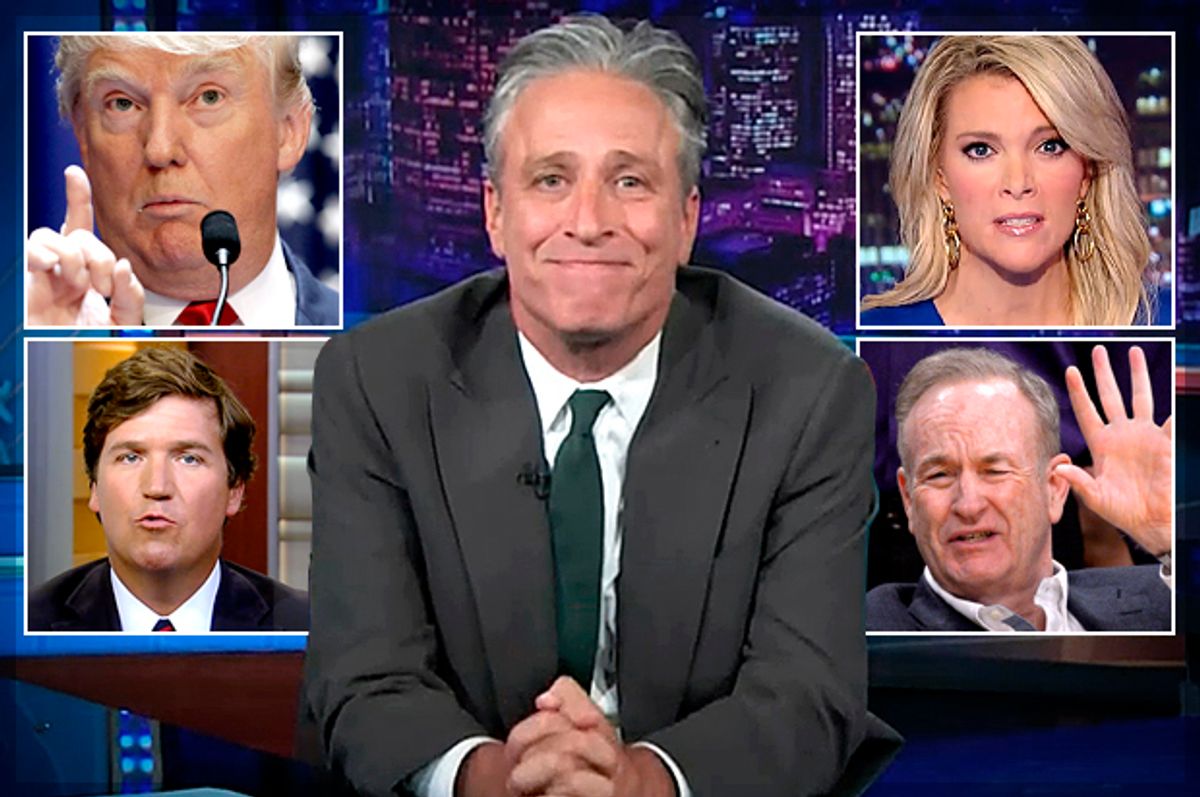 You don't get to 500 million friends without making a few enemies, and perhaps no one knows this better than Jon Stewart. During "The Daily Show" host's 17-year run, he's united us -- and by "us" I mean "stoned" "dopey college kids" (via Bill O'Reilly) -- in our hatred for hypocritical right-leaners, Fox News and the "faux-meat" kings at Arby's.

News last week that "The Daily Show's" producers were in talks with many of Stewart's favorite on-screen punching bags to appear on the final episode -- “notables whom Stewart’s given grief over," as Page 6 calls them -- was music to my ears. Like, this kind of music.

Page 6 noted that the lot of "Daily Show" villains would, in all likelihood, be appearing on the closing Aug. 6 episode in a sort of "roast-style" segment.

This means a few things: It means "The Daily Show's" finale will be a far cry from the fantastical, Candy-Landish tribute Comedy Central colleague Stephen Colbert enjoyed last year with "The Colbert Report." It also means that it's time to start fantasizing about the villains we'd like -- no, kill -- to see give Stewart a good roasting.

I mean, obviously. Stewart's history with the hot-tempered Fox News pundit (and full-time "serial liar") is long and contentious. Way, way back in 2006, O'Reilly waged war on "The Daily Show" when he called its viewers "stoned" "dopey college kids." Moreover, an appearance on Stewart's program wouldn't be unfounded; O'Reilly has made a handful of appearances on the show in the past, almost always under the pretense of discussing new books he's written. Book or not -- could O'Reilly possibly turn down an opportunity to have the last word? We at Salon know how much he loves that.

Fox's evil genius recently revealed that at the start of her stint on the network, an 11-minute takedown from "The Daily Show" reduced her to tears. In the years since, she said she's bucked up and "no longer listens to Jon Stewart." The chance to roast "The Daily Show" host on his last-ever episode would be so circular, like that cliff-dangling scene from "The Lion King" where Mufasa falls to his death after Scar utters the iconic line "Long live the king." Megyn is Scar in this scene, just go with me here.

It's been nearly 10 years since Stewart appeared on CNN's "Crossfire" to beg Carlson to stop "hurting America" and to extend an offer to come join him on "The Daily Show." We all know how that ended; the host, whose face we now often see plastered across "Daily Show" takedown segments now boasts a comfortable gig at "Fox & Friends" -- maybe too comfortable, even (he once fell fast asleep on the sofa during a segment). Carlson was recently asked by C-SPAN’s Washington Journal whether he'd consider having another "Crossfire"-style debate. He provided the non-answer, "I didn’t debate Jon Stewart the first time. He came on our show and made a bunch of noises that I didn’t understand then and I don’t understand now.” This seems ... promising?

It's hard to pick just one favorite Fox News villain, but back in 2011, Stewart made it pretty clear that Hannity was “probably the most loathsome dude over there.” The feuds only grew stronger and more explicit in the following years. The most recent of which, ended in Hannity calling Stewart a "sanctimonious jackass" because he dared to "make light" of his week-long coverage of spring break in Panama Beach City. There's gotta be more glorious insults about "liberal hypocrisy" bottled up in there.

Stewart nearly packed up his bags last week after learning that Trump hadn't actually filed away the proper paperwork to make his 2016 candidacy official. It goes without saying that someone who Stewart loathes/cares about that deeply would be considered for the spot. Plus, with all the nicknames Stewart has coined for Trump through the years -- from "Trumpinator" to "F*ckface von Clownstick" -- this would be an ideal time for the newly minted GOP candidate to generate some of his own for the departing host. What's there to lose, really?

Illinois Rep. Aaron Schock got the brutal "Daily Show" treatment this last March, as the photogenic rising star waved farewell to all of his political dreams. While Schock's questionable spending habits certainly don't fall on the shoulders of the "Daily Show" host, Stewart did have some role in unearthing some of Schock's insanity in his heyday -- most memorably, when he gave us an Instagram montage set to Taylor Swift. Schock must have some extra time on his hands these days (because he's not in jail, like his dad predicted) so why not give a roast a shot?

We've seen seen the former GOP vice presidential nominee and Alaska governor go to great lengths to appear "in" on the joke, even when that meant appearing in "Saturday Night Live" rap segments or being a stage plant in a "40th anniversary" segment asking, 'How much would Lorne pay me if I ran in 2016"? A Comedy Central roast wouldn't be far outside Palin's wheelhouse. What's more, Stewart recently called her speech at the Iowa Freedom Summit  “incoherent, rambling and unintelligible," likening it, at one point, to slam poetry. A roast would be the ideal place to channel some of these slam-poetry tendencies. Maybe the audience will be generous enough to give her a few finger-snaps when her stanzas truly resonate.

With the news of Glenn Beck's departure from Fox News in 2011, Stewart giddily opened his "Daily Show" program on a lone stool and launched into a monologue mocking his resignation. The sweetest revenge in the world would be seeing the conservative commentator mock Stewart's own resignation now that his time has come. Bonus points, if he was to whip out a blackboard like the one Stewart once used to school him with.

Just this month, Stewart gave the former Defense Secretary (and "motherf*cker") the roasting of a lifetime after his continued backpedaling on the Iraq invasion. "There’s always hope that one day, [he'll] think, just for a second,” he ended his segment. Rumsfeld appeared on the show back in 2011 to plug his memoir and provided some info that largely contradicted his most recent doubts about invading Iraq. A roast would give Rumsfeld the spotlight he needs to clear up the confusion most of the Comedy Central team has about his platform.

Who better to roast Jon Stewart than a life-size Arby's roast beef sandwich? For years, Stewart has made jabs at the chain restaurant's “faux meat," even using it, back in 2014, to describe Fox News host Sean Hannity's style of journalism: “To see it night after night, serving up the same shit, my god, you’re the Arby’s of news.” Let's also not forget the time Arby's reached out to Stewart to offer him a job opportunity and was shut down almost immediately. The love-hate dynamic is all very confusing.