America's real founding moment: Why we get Independence Day all wrong

The black fight for freedom is the key American narrative -- and the U.S. as we know it is younger than you think 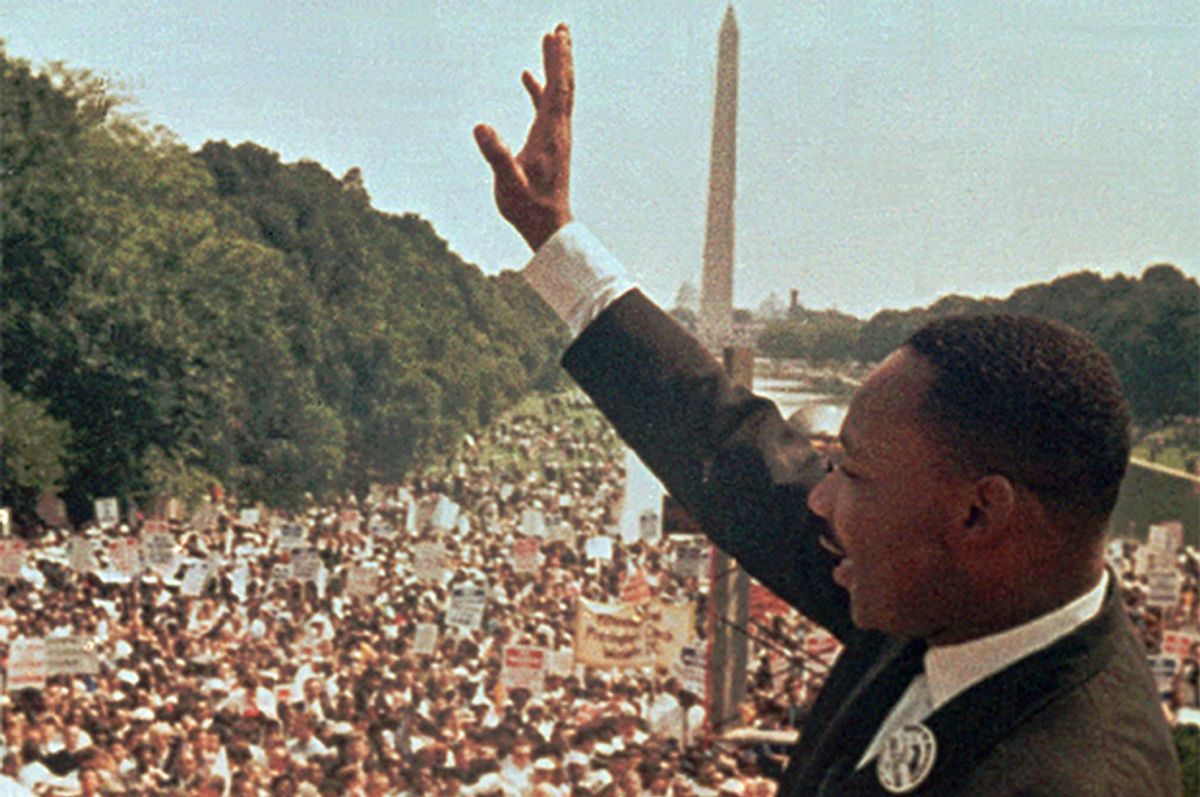 It’s been a little more than two weeks since nine human beings, all African-American, were murdered in a Charleston, South Carolina, church by a young white supremacist. In some ways, the public reaction has been predictable; all have expressed outrage, disgust, sadness, following a post-massacre routine that has become depressingly familiar. In at least one way, however, the response from America’s mostly-white mainstream has been something it usually isn’t, especially isn’t when it comes to race: genuinely introspective.

The most obvious manifestation of this collective soul-searching is the sudden toxicity of the Confederate battle flag, and the calls for its removal from government property. The demand has come not only from liberal activists and people of color but, more surprisingly, from Southern Republican politicians and multinational corporations, too. For the first time in many years, perhaps ever, it seems like many white Americans are willing to reassess not only the Confederate battle flag, but the influence white supremacy still holds over their society.

That this process has unfolded in the run-up to the Fourth of July strikes me as especially appropriate. No other holiday is endowed with the same kind of Americanness (though there’s a strong case to be made that Super Bowl Sunday, an unofficial holiday, comes close). No other holiday so clearly elevates secular values, such as liberty and self-government, to almost metaphysical heights. If there’s one day of the year when Americans collectively remind themselves of who they are and what they profess to believe, Independence Day is it.

This is a good thing, in many ways. For Americans who don’t regularly participate in organized religion, the Fourth of July is a rare moment of unity, one of the precious few times every year when an increasingly balkanized society coalesces into a single, shared experience. But the Fourth of July has its problems, ones connected to the evolution of America’s self-perception, of which the debate over the Confederate battle flag is a part.

Simply put, while it’s intended to be a day to honor the fundamental values motivating the American experiment — liberty, independence, justice and self-determination — the promise of Independence Day is not for all Americans. It never has been and it never will be. For nearly 100 years following July 4, 1776, there were millions of Americans whose lives were the antithesis of free, and for whom justice, equality and self-determination were effectively fantasy and myth. These people — the chattel slaves of the American South — were not just unfree when compared to their white compatriots; they were among the most unfree and maltreated people in the history of the world.

This is why establishing the Fourth of July as a de facto “America Day” is so incoherent. It’s true that something calling itself the United States of America asserted its independence during the summer of 1776; but the country I’ve lived in for my whole life is not it. In some sense, my country — a multiethnic, pluralist, secular and democratic republic — only came into being during the civil rights struggle of the mid-20th century. Yet even if we aren’t so exacting in our standards, today’s America came into being during the Civil War, not the War of Independence.

In fact, the only way we can see Independence Day as anything more than a false start is if our understanding of liberty and equality is subject to the overriding prerogatives of white supremacy. Indeed, for much of the United States’s lifetime, that was very much the case. As a voluminous history shows, that was the way the rebel states understood freedom and justice. Both were dependent on the complete subjugation of African-Americans. It was as if the slaves’ mangled and broken bodies were platforms upon which poor whites could stand eye-to-eye with the Southern aristocracy.

And just as white supremacy distorted our understanding of Independence Day’s profound limitations, so too has it warped our view of the Confederacy and its increasingly infamous battle flag. When the Civil War transitioned into Reconstruction, and when Reconstruction collapsed under the weight of terrorist attacks from the Ku Klux Klan and a large assortment of other violent white supremacists, the deal agreed to by whites in the North and the South required sacrificing African-Americans’ freedom as well as historical accuracy on the alter of reconciliation. As it’s often put, the North won the war — but at the cost of letting the South win the peace.

Thus were multiple generations of American children taught a version of their country’s Civil War that was, in key respects, nothing less than a lie. The raw sadism and barbarity of slavery was downplayed, as was the institution’s central role in launching what a disconcertingly large number of people still call the “War of Northern Aggression.” The grotesquely false depiction of American slaves’ relationship with their oppressors as being akin to those between a father and his children was elevated. And the flimsy, easily debunked argument that Southern rebels fought for states’ rights — rather than the right to own slaves — became conventional wisdom.

Through a combination of forces, including heroic activism, fearless scholarship and the slow but awesome progression of demographics and time, the white supremacist version of American history, which long ago lost purchase among academics, is finally losing influence over the mainstream, too. But as we saw in a Thursday poll from CNN, in which nearly 60 percent of white respondents said the Confederate battle flag was not racist, the work is far from over. The tide is only just beginning to turn.

Yet while I believe freeing ourselves from the false and revisionist history of the Civil War is a vital step toward building an America that comes closer to its professed standards, I don’t believe that will be enough. What will ultimately be necessary is something that seems as unlikely today as South Carolina’s removing the Confederate battle flag from its Capitol grounds seemed in 1962: a mainstream recognition that while the country may have technically begun in the late 18th century, the founding of America as we know it happened on June 19, 1865 — or even July 2, 1964. Until we rid ourselves of white supremacy’s myths, we cannot come together as one people, equal and free.