Stop the unnecessary killing of the mentally ill: A quarter of those killed by police this year were in a mental health crisis 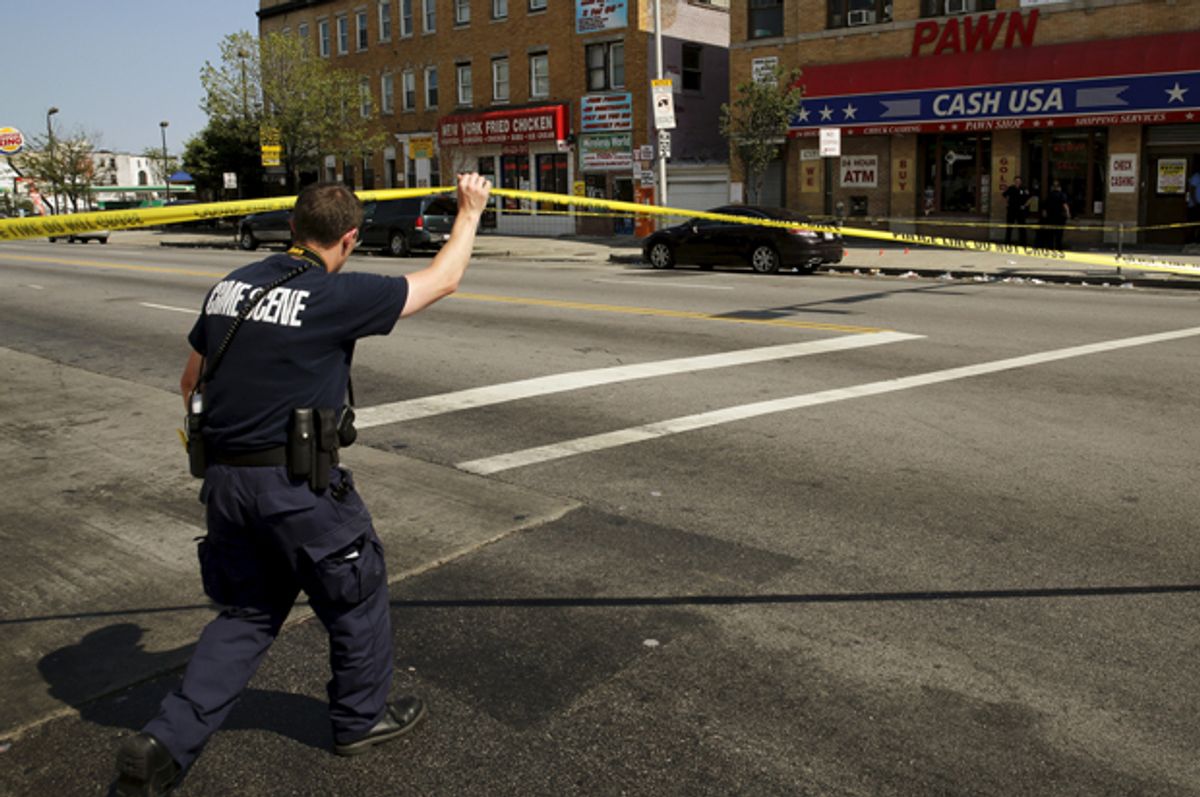 A quarter of the 462 people who were shot and killed by police so far this year were in the middle of an emotional or mental health crisis, according to the Washington Post.

Most of these 124 people were armed at the time of the shootings, though the cops who shot them weren’t responding to a crime. Most of the time, relatives were calling 911 for help dealing with a loved one who was behaving erratically. At least 50 of the people shot were suicidal.

The data compiled by the Post reveals what many mental health and policing experts around the country already know: too many officers are ill-trained to deal with the mentally ill or aren’t following the training they underwent at police academy or in follow-up workshops that focus on dealing with people in severe emotional distress.

Nationally, police officers get at least 60 hours of handgun training, but only eight hours of training on how to deal with the mentally ill and another eight on how to deescalate tense situations, according to the Police Executive Research Forum.

Earlier this year, AlterNet published a story about how few police departments undergo Crisis Intervention Team (or CIT) training, that requires officers to undergo 40 hours of coursework teaching them how to de-escalate tense situations with mentally ill people. During our reporting, we learned that some studies have shown that departments that require CIT training saw a decrease in shootings of the mentally ill. But out of the 18,000 law enforcement agencies in the U.S., only 2,700 of them have CIT training. And even those that underwent the training, like the Albuquerque Police Department, continued to see their officers kill a high number of mentally ill people. Charles Cochran, the founder of CIT, told AlterNet that Albuquerque started drifting away from the core principles of CIT that make officers accountable to the community as well as the department.

Many of the shootings in which Albuquerque cops shot and killed a mentally ill person were later determined to be justified. The three LAPD cops who shot and killed a homeless person in downtown L.A. earlier this year underwent CIT training, so perhaps accountability for unnecessary shootings, not more training, is the issue. Eric Sanders, a former cop who spent 12 and a half years in the NYPD, told AlterNet that most of these shootings happen because the cops overreact, not because the mentally ill person poses a threat.

“The biggest problem is that police officers are not following their training,” said Sanders, who is now a civil rights attorney. “They aren’t taught to go to a scene and then immediately engage people who are emotionally disturbed and fight with them. They’re not taught to do that. They are taught to use time and distance to make assessments and wait on their supervisors because the supervisor will likely have the other equipment they need to deal with people who are emotionally disturbed, whether that is a water cannon, net, bean bags or any other non-lethal method.”

While it is true that too many cops are not held accountable for using unnecessary force, another issue is that many people, including family members, don’t know how to support someone in a mental health crisis until it is too late.

Often times, people tend to call the police in hopes the officers will help de-escalate a frightening situation with a mentally ill person. In many cases, they don’t have to. Alfiee M. Breland-Noble, associate professor of psychiatry at Georgetown University, told AlterNet that there are alternative resources people can rely on besides law enforcement.

“Many cities have something called a system of care, which is basically a central portal to help direct people to available resources besides law enforcement,” Breland-Noble said. “These systems include places like the local community health clinic, the psychiatric hospital, the community mental health clinic, hotlines, and support groups. In addition, there are often print resources that loved ones can find ahead of a crisis that include information on local chapters of organizations like the National Alliance on Mental Illness, CHADD and the Depression and Bipolar Support Alliance.”

Breland-Noble also mentioned that most people don’t understand how to support people who are mentally ill or in an emotional crisis. For example, she said the world can be a very lonely and ostracizing place for someone with a severe and persistent mental illness and any protection from that is logical to him or her — including holding some kind of object that can be perceived as a weapon.

“I am not surprised that individuals might wish to have something that offers them the feeling of security,” she said.

Sanders believes we would see fewer shootings of the mentally ill, and in general, if cops were simply held accountable for using unnecessary force. A Dallas police officer was fired earlier this year for violating the department’s deadly force policy and procedures for dealing with the mentally ill when he shot a mentally ill man in 2013.

"We are not going to sweep officer misconduct under the rug," Dallas Police Chief David Brown said at a press conference announcing the officer’s firing. "An officer's actions must be reasonable and necessary."

“Training will reduce the likelihood of having these problems, but you know what else will reduce these problems? Holding people accountable,” he said. “That is left out of the conversation. When officers don’t follow their training, there should be consequences for it. We taught you we don’t want you to respond in this way, because by responding in this way, you’ve escalated the situation to a level where you had to use force. You didn’t follow tactics, therefore, you violated the policy.

"It is very rare you hear that.”