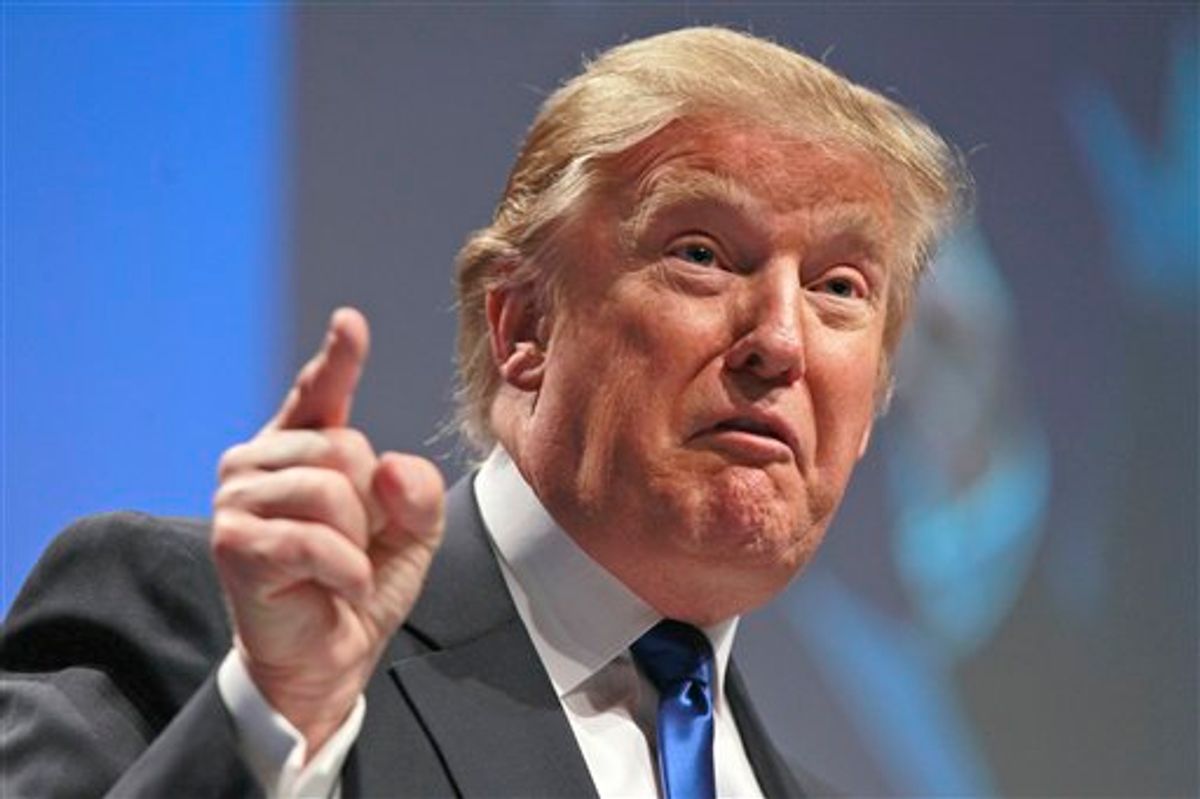 Yes, he did kick off his campaign for president by calling Mexican immigrants "rapists" and criminals, but Republican Donald Trump somehow still thinks his campaign will "win the Latino vote."

Trump refused to back down from his controversial comments, telling NBC News on Wednesday that he was proud to bring attention to the issue of illegal immigration, “You wouldn’t be hearing about the word immigration if it weren’t for Donald Trump,” Trump said. "I brought the whole subject up!”

And Trump, apparently oblivious to the widespread backlash his comments have received, insisted that his offensive rhetoric would not prevent him from garnering the support of Latino voters. Pointing to the Mexican workers he employs, Trump declared, "They love me!”:

“I have a great relationship with the Mexican people. I have many people working for me, you can look at the job in Washington. I have many legal immigrants working with me — many of them come from Mexico. They love me. I love them. And I’ll tell you something: If I get the nomination, I’ll win the Latino vote. I will win it, because I’m going to create jobs. Hillary Clinton is not going to be able to create jobs, I will tell you right now, neither is Jeb Bush going to be able to create jobs. I will create jobs and the Latinos will have jobs that they don’t have right now and I will win that vote.

Trump appears to have missed Tuesday's edition of The Washington Post. The paper spoke with 15 laborers at Trump’s latest real estate venture, the renovation of the Old Post Office in Washington, D.C. into a Trump hotel, who illegally crossed the U.S.-Mexico border and one young man called Trump’s comments about Mexican immigrants “ironic.” 29 year-old Mexican immigrant Ivan Arellano told the Post, ”The majority of us are Hispanics, many who came illegally and we’re all here working very hard to build a better life for our families.”

Shortly after his announcement, Trump insisted "I do great with Latino voters. I employ so many Latinos ... and you know, the Latinos love Trump and I love them."

Trump's antics have cost the real estate mogul and reality show host numerous corporate relationships, but the backlash isn't just confined to corporate boardrooms. One Moveon.com petition garnered 734,083 signatures in a successful effort to get Macy's to cut ties with Trump and another Change.org petition encourages business to refrain from opening inside Trump's planned new D.C. hotel. Trump dismissed the negative impact of his presidential campaign on his business dealings to NBC, "Yeah, I’m losing some contracts, who cares, people – politically they’re weak and they want to be politically correct,” he said. “Compared to what I have, it doesn’t matter … I would still do this.”