The Confederate Flag's stubborn meaning, beyond heritage vs. hate: "I’m a tough individual, you can’t get me down, you can’t tell me what to do" 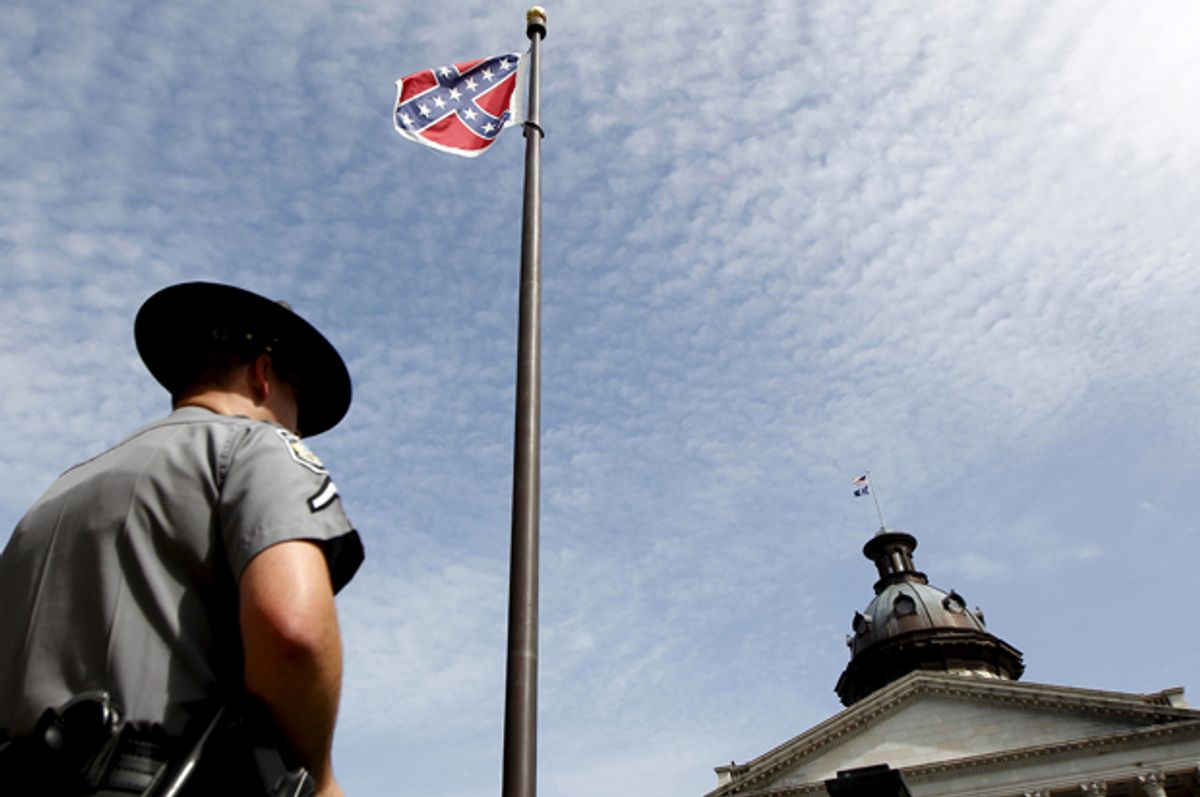 John Coski is the chief historian at the Museum of the Confederacy in Richmond, Virginia. He’s also the author of “The Confederate Battle Flag: America’s Most Embattled Emblem,” from 2005. We spoke to Coski about what the flag has meant over the centuries and whether the Charleston shooting has changed things.

The flag has meant different things to different people. How does it break down for various groups?

There are different perceptions, and they’re not picked out of a hat. They’re based on uses. So the heritage lobby, the heritage activists – and people beyond the activists, quietly sitting at home now – see it as a symbol of heritage because they had people in their family who fought under the flag. That’s a huge percentage. I don’t know how many, exactly. There was a Gallup poll a few years ago, maybe 2011, that showed that more people than not are neutral, have no feelings one way or another; I suspect that will be truer and truer as demographics change, as fewer and fewer people have Confederate ancestry. That still represents a sizable group of people.

And then there are people who experienced it, in the civil rights era, as a symbol of hate or at least a segregation, anti-integration and white supremacy symbol. There are people who used it because they believed fervently in states' rights and they didn’t think twice about the links between states' rights and segregation. But they were joined at the hip, just as defending the Confederacy and defending slavery were joined at the hip.

So there are people who experienced this as a symbol of people trying to do them harm, or deny them what they consider to be their rights, their citizenship. And people who did not experience it directly know it that way – they know it from photographs and stories.

What we tend to see is the polarities of heritage versus hate. Those are rooted in real experience.

But much of what we know about the flag comes less from real historical incidence but from media images – movies, television.

Over the years, going back to the "Gone With the Wind" era, and in my lifetime, especially, there’s been a “redneck, good-ol’ boy” image. It’s not exactly a middle ground, because that connotes ideological middle ground. But I mean something  other than heritage or hate – it’s a whole different tradition, kind of a pop culture sense.

But for outsiders – outside of the South, outside of the United States – it became disembodied from that, as it became a symbol of rebellion. That’s rooted in Yankees versus rebels, in a Civil War context. But it’s transcended that. It’s rebels wherever you are, even if you are rebelling against the government of Ukraine. You’ve probably seen the photos, they’re using a Confederate flag, without the stars, with the color a bit changed … But it’s a symbol of rebelliousness, it’s good-ol’-boys like the Dukes of Hazzard, it’s the motorcycle rider with the flag on the back of his leather jacket, a truck driver who has it on his truck … Individuals sending the message: I’m a tough individual, you can’t get me down, you can’t tell me what to do. It’s an individual-character totem more than regional identity.

The media has perpetuated that. I remember seeing in “Pulp Fiction,” when they roll into that gun shop, and you see that flag on the wall. My reaction – even though at the time I had written the script on the exhibit that led to my book – as a viewer, I reacted exactly as Tarantino wanted me to react: “Oh boy, something bad is gonna happen. There are bad dudes here.” In "Forrest Gump," the guys chasing poor Forrest in his leg braces, having some good ol’ fun, as he’s chased by a truck, right there in the ‘50s when the flag became really popular.

Some good ol’ boys with a not-so-generous spirit. It was not the "Dukes of Hazzard" – carefree guys.

I’ve seen a lot of quotes from people saying, "When I see that flag, I know exactly what it means." In the introduction to my book, I say the problem with the flag is that everyone knows what the flag means to them. But can you generalize from your own perception, to what it means generally? Can you assign a motive to someone else based on what it means to you? I would argue that you can’t. From an ethical standpoint, it’s just fundamentally wrong, projecting your perceptions of a symbol and making it somebody else’s motive.

If I see it as a symbol of heritage, do I really seriously think that everyone who sees it is going to understand that’s what I mean? Conversely, if I think it’s a racist symbol, and I see it someplace, do I really want to go through life thinking that everyone who flies that flag is out to get me, is a racist? Or does it behoove me to understand what I mean. To look at the context clues and say, I’m in a cemetery. Or, Oh, maybe that guy’s threatening – maybe he means something different.

I don’t mean that it can’t be a symbol of racism. But to say that’s what it might mean is different than saying that’s what this person does mean by it. It’s a matter of living in a plural society, where people have different meanings for different symbols. Otherwise I’m judging someone with my own perception.

Things have exploded around the flag in the last few weeks. For now, it seems to be acquiring a fixed meaning. But where had things been moving? Were we reaching a consensus about what the flag meant? If this Charleston shooting hadn’t happened, where were we going?

There will always be a percentage on all sides that thinks it had a fixed, true meaning, and that everybody else who doesn’t understand it needs to be “educated,” what you and I would call “reeducated,” to believe what they believe. There will always be a fairly high percentage who believe in such a thing as capital-T Truth. That’s not going away.

But demographically, because of the number of people with Confederate ancestry, that percentage, I think, is fading.

When the Daytona raceway people asked people not to bring flags, they brought flags. When officials at Ole Miss asked people not to bring flags to football games, they brought more than ever. That contrary spirit reigns as well. We’ll always have that kind of backlash against the tendency toward fixing its meaning. If we’re coming to a cultural understanding of what it means, there will be a certain percentage that will push back – just in principle. With or without Confederate ancestry. Just because they resent the idea that it means this and only this. People who over the last half-century have watched their world change — whether South or North.