If Apple Music wins, what will we lose? Here's the corporate clampdown we didn't see coming

Taylor Swift's in! Prince is out! In the future, one company could decide what endures and what fades away 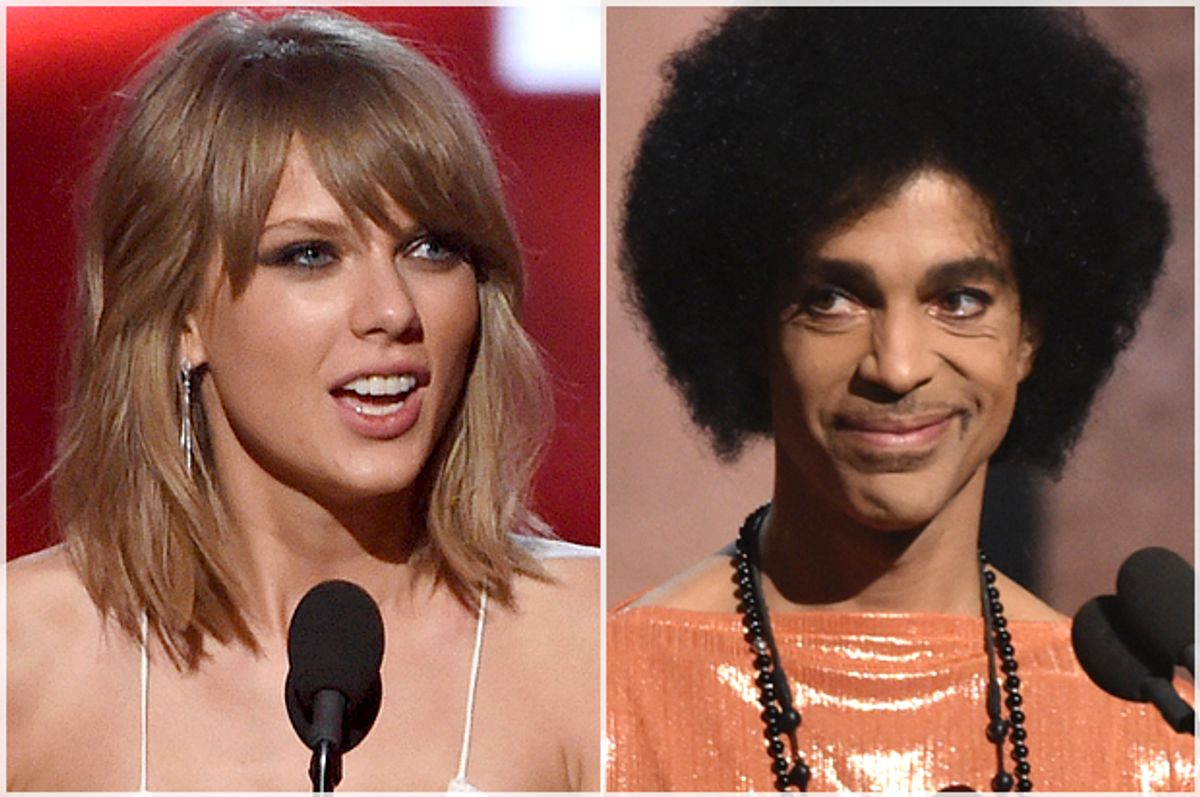 A little over a week after Apple Music's launch, reactions to the streaming service have been decidedly mixed. The rollout has been marred by technical problems and bugs, ranging from system incompatibility to an inability to sign up. Confusion and uncertainty about how the various Apple-branded components cooperate has especially caused much consternation among those with huge iTunes libraries: Turning on the iCloud Music Library seems to have been a problem for many users, leading to inconsistent syncing, lost metadata and incorrect album art. One review called Apple Music "maddeningly uneven"; others praised the music curation aspect while noting its "crowded albeit beautiful interface."

Artist reaction to the launch has been equally interesting. Prince removed his catalog from all streaming services, leaving Tidal the only sanctioned place to hear his hits, while Lil Wayne released a new surprise album, "FWA," exclusively via the Jay Z-owned platform. Longtime streaming holdout AC/DC, meanwhile, finally relented and made its catalog available on Apple Music and Spotify, while Taylor Swift's tunes are available only on the former service -- unsurprisingly, since her impassioned letter to Apple about artist royalties apparently had a sizable impact on its approach to equitable payments.

Chances are good these exclusive releases and instances of catalog shuffling are just the tip of the iceberg: After all, once Apple Music's three-month trial period for users is up, it'll be interesting to see who opts to continue participating, both on a consumer and artist level. And then there are artists such as Peter Gabriel, whose solo work drops in and out of streaming services, seemingly at random. (In fact, only the first disc of the 1983 double album "Plays Live" and some random soundtrack songs are currently available on Spotify, although Apple Music has much of his catalog.) Yet the appearance (and disappearance) of large swaths of influential music hints at a much more sinister byproduct of the ongoing digital music wars. As the idea of music ownership morphs into something that's increasingly ephemeral -- a phenomenon Hazel Cills explored in a thought-provoking NPR piece, "Looking for a Connection in an Infinite Jukebox" -- the days of being able to access any song at any time seem to be slowly disappearing.

From a historical and preservationist standpoint, this is unsettling, something Ann Powers recently acknowledged in her own thorough, fascinating NPR piece about digital music archiving and information conservation, "Digital Underground: Who Will Make Sure the Internet's Vast Musical Archive Doesn't Disappear?" In fact, in the article, ethnomusicologist/DJ Wayne Marshall zeroes in on the issues that arise with streaming services. "Ephemerality is a key problem — and that goes not just for the media objects themselves but all the discourse and metadata and meaning gathered around them," he says. "More problematically, because these sites take it upon themselves to police content and remain in the 'safe harbor' of such things as the DMCA [Digital Millennium Copyright Act], they profoundly shape what ultimately gets archived and what does not."

In other words, it's not researchers, academics or independent entities dictating the accuracy and enduring legacy of music; it's larger companies with deep biases (and financial interests) directing how music is presented and remembered. In some cases, the result is that important musical contributions are being omitted or written out of the broader musical narrative. Not only is this detrimental and insulting to entire genres (such as classical, as Alex Ross notes in the New Yorker), but it minimizes the contributions of countless songwriters, composers and musicians. On some level, this is akin to how commercial radio treats its nostalgia: Think about the narrow playlist of classic rock stations -- which tend to emphasize well-known songs and ignore minor hits or album cuts -- or how the version of '90s alt-rock that lingers on modern rock airwaves today is far more streamlined (and less weird) than it was at the time. Every day, faceless corporations are slightly reshaping music history, one Pink Floyd or Nirvana spin at a time.

However, the rise of streaming services and their piecemeal catalogs introduces an interesting new wrinkle: At what point did our own individual musical collections and preferences become something controlled and organized by huge companies? Certainly from a hardware standpoint, this is how it's always been: The arrival of new musical formats -- e.g., 8-tracks, cassettes, CDs, MP3s -- meant that consumers were forced to buy a Walkman, CD player or iPod to keep up. But these things are only dictating how we're listening to music -- not what we're allowed to listen to. Streaming's limited selection is a profound shift in accessibility: Even the incomplete catalogs of digital music marketplaces such as iTunes or Amazon MP3, or the limitations of an eMusic subscription, have never been fatal obstacles. Because MP3s are considered a tangible product, they're something a user could create on their own after buying a physical CD. Those who rely on streaming music don't have much recourse if a company or label has decided not to make a song or an artist available.

For anyone looking to shed physical media or even just pare down sprawling digital collections, this evolution is even more problematic and frightening. Relying on one streaming service isn't practical, both from a completist and a stability standpoint, while juggling several accounts to ensure comprehensive coverage is a pain. The only semi-foolproof solution seems to be a combination of cloud-based backups and external hard drives (and backup hard drives), so that neither a catastrophic crash nor technological whims will leave users high and dry.

Protecting the physical and digital music collections more and more feels a lot like trying to ensure an endangered animal doesn't go extinct.

Complicating matters further is one of the main complaints about Apple Music: how non-intuitive it can be to use. For example, there are very specific versions of the Apple operating system and iTunes software that work with the service. For those with the latest Mac technology, that's no problem; for others (such as myself) with a slightly-older iPhone and a PC laptop, getting the platform up and running isn't quite as easy. By limiting access to those with a certain version of hardware and meticulously updated software, Apple Music is inadvertently sending the message that the service is reserved for those who can afford to buy or update a narrow, specific version of technology. That's a common internet mistake--think about search functions on websites that only work well when a user guesses the one correct way to find information--but it's setting an ugly precedent, one where only a certain class and type of consumers is welcomed.

As a lover of music, it's difficult not to feel a bit betrayed by these limitations: After all, at least where digital music is concerned, the internet has traditionally been considered the great equalizer, because of how easy it's been to hear and obtain tunes. During the Napster (and Napster-knockoff) age, downloading songs was as easy as browsing for and selecting books at a library, while iTunes and Amazon made buying digital music a streamlined, simple process. Once illegitimate sharing technology was suppressed, users found more clandestine methods to share music, such as file-hosting services and torrents; meanwhile, MP3 blogs (both legal and illegal) displayed a buffet of free tunes right in plain sight of search engine indexers. The existence of Soundcloud and YouTube made it even easier for musicians to push their music into the world, while digital music stores such as Bandcamp sprang up so that artists could sell their music directly to fans. While finding certain leaks or releases is certainly elusive, the days of having to spend blood, sweat and tears hunting down a particular song or artist have by and large gone away.

Why didn't we see the clampdown on this freedom coming? Perhaps it's ingrained (if misplaced) optimism: The Internet-as-information-Utopia perception lingers despite mounting evidence to the contrary. Maybe all of these years of unfettered music access gave us a false sense of security, incorrectly reinforcing the naive view that these good times would last forever. Or perhaps the intrinsically malleable idea of musical discovery makes it seem immortal: Over time, playing a 45 for a friend morphed into making mixtapes, sharing Napster libraries with your dorm, posting a YouTube video to your Facebook wall or curating a Spotify playlist of hot jams. When there's a steady flow of music available at any given time, and myriad ways to share things, it's impossible to think that this gush might be cut off.

Of course, all of this comes at a price: Namely, artists are the ones continually being screwed over by paltry royalty rates and label greed. Streaming's certainly not going to solve this problem; if anything, the increased dominance of the form is going to continue to squeeze all parties. That's nothing new, either. As history has shown us time and time again, regulations always pop up to tame even the wildest corners of the internet. The arrival of Apple Music is perhaps just the latest high-profile example of music being manipulated and controlled by forces greater than all of us.