"Tangerine": A gorgeous and timely human comedy — and one of the most important American films of the year

This moving, hilarious Christmas tale about two trans sex workers breaks new ground, and was shot all on an iPhone 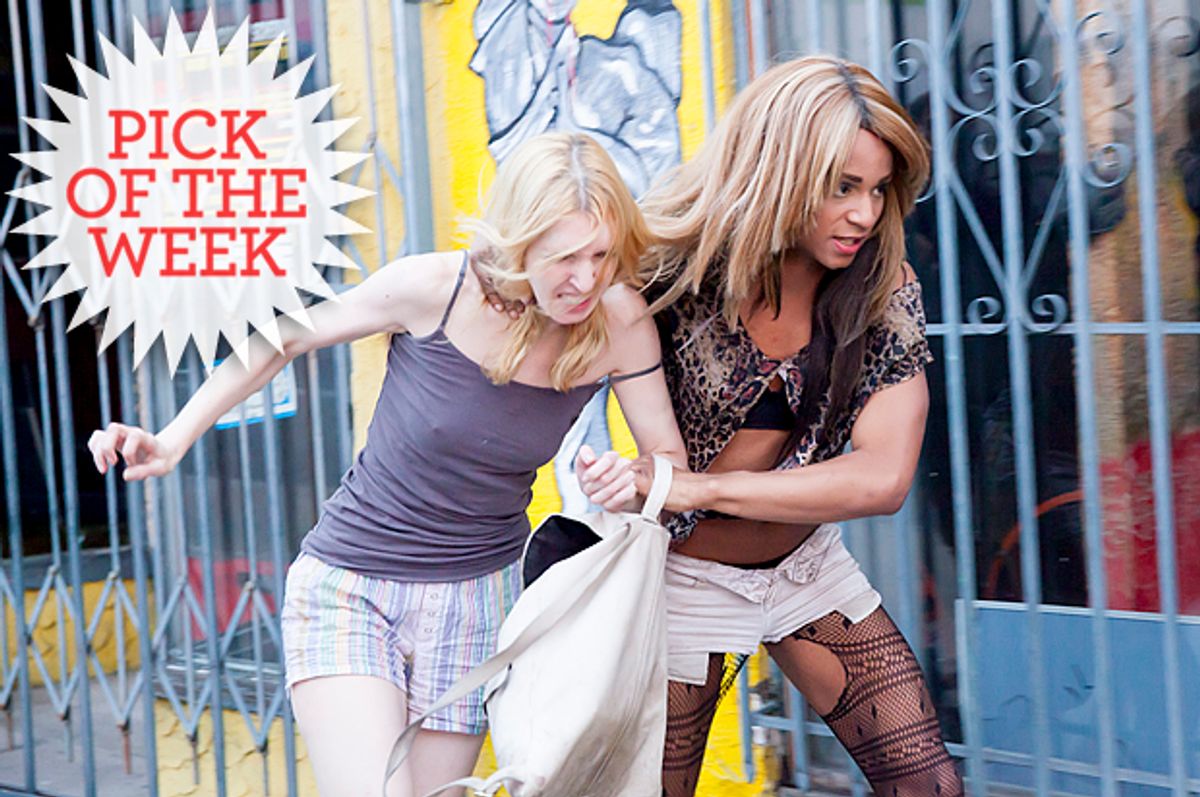 Anybody who has shot scenes from a beach vacation or an elementary-school graduation with a relatively recent iPhone has been surprised by the quality and richness of the hi-def digital video captured by that thing. And what I mean by surprised is roughly: Whoa, I must be tripping my brains out on acid! This goes well beyond the fact that the colors are supersaturated and carry a hint of electronic shimmer, as is normal for consumer-grade digital video. Every shadow contains bottomless pits of purple and blue, every primary color or pastel shade contains endless variations of hue. Lines and details have a sharpness we almost never perceive in the real world; light sources seem to be infused with a godlike luminosity that makes 1950s neon seem like a pale imitation. To borrow a film-critic cliché, iPhone video is “painterly,” if the painter were a photorealist nearing the end of a week-long drug binge.

Director Sean Baker’s decision to shoot an entire feature film on the iPhone 5 – an actual movie, which you can see in theaters and everything – sounds like a pretentious, arty gimmick until you see it. Baker’s film “Tangerine” is not a rejection of form or technique, or an embrace of aesthetic poverty in the service of realism, or any such thing. From the first shot, of a scarred, stained, unidentifiable yellow field that fills the whole screen – it turns out to be a Formica tabletop in an all-night doughnut shop on Hollywood Boulevard – this movie carefully constructs its own visual and emotional world, one that embraces the iPhone’s limitations, or perhaps embodies them. This is a gorgeous, timely and possibly profound human comedy, and if there’s no disentangling the medium from the message that’s because both are powerful and ambiguous.

You could say that a story about trans sex workers journeying through the streets of L.A. on Christmas Eve is already a story about the harsh contrast between artifice and reality, but it would be equally true to say that this particular narrative was called into being by its underlying technology. Perhaps the greatest tribute I can offer to Baker, who directed, produced, edited and co-wrote “Tangerine” (and shot much of it himself) and to Kitana Kiki Rodriguez and Mya Taylor, the forceful and courageous trans actresses who play the main characters, is that while the iPhone angle is fascinating, you stop thinking about it almost immediately while you’re watching the movie.

You can go way down the rabbit hole into the philosophical, epistemological and technical problems posed by the advent of digital video, as I did in this article for a different publication. On the most fundamental level, video images are totally different from those captured on film, which represent the direct effects of reflected light on photographic emulsion. Whether captured on an $80 cellphone or the Arri Alexa (the current Hollywood standard), digital video always represents some software engineer’s attempt to encode and replicate the images of the real world captured by the human eye. (I’m going to skip over the part where we argue about whether there is a “real world” and how we would know.) I’m not sure what it says about the current state of human society that the market-dominant cellphone creates overtly “artistic” or “cinematic” images whose hallucinatory, dessert-topping vividness bears little relationship to the visual field of external reality.

On some level that question probably lies near the heart of “Tangerine,” but if so it’s seamlessly blended with the film’s hot-button social topic and its complicated and unvarnished human characters. Baker has previously made two films about different aspects of the contemporary immigrant experience (“Take Out” and “Prince of Broadway”) and another about life on the outer fringes of the Hollywood dream machine (the 2012 “Starlet,” with Dree Hemingway). Only the last of those got any attention outside the insular indie-film universe, but they all display a talent and level of commitment that go beyond issue politics. “Tangerine” is somewhere between a happy collision of ingredients and a major step forward. A movie shot on a phone that also captures the lives of trans women of color with complexity and humor could not possibly be more perfectly timed than the summer of 2015.

“Tangerine” has a number of interlinked plot strands along with an episodic, anecdotal structure that reminded me a little of early Jim Jarmusch movies, especially “Mystery Train” and “Night on Earth.” In the strictest sense, the ailing Cherokee man (Clu Gulager) and the recently bereaved dog owner (Linda Macon) who take their turns in the taxi driven by an Armenian immigrant named Razmik (Karren Karagulian) have nothing to do with the story. Like the pair of semi-comatose party boys who leave his cab smelling dreadful, they are colorful or symbolic adventures during Razmik’s Odyssean quest for Sin-Dee (Rodriguez), the beautiful but hotheaded sex worker who is herself roaming through Hollywood on the night before Christmas, with zero visions of sugarplums dancing in her head.

Sin-Dee has just gotten sprung after 28 days in jail, and thanks to her indiscreet best friend Alexandra (Taylor), has heard reports that her pimp and/or boyfriend and/or fiancé, an elusive character named Chester, has taken up with another girl during her absence. This other woman, whose name may be Desiree or Dana or Dinah or something else beginning with D, is both white and a biological female, which complicates the picture (and provokes a good deal of trash talk on all sides). At first I was worried about the presentation of Sin-Dee and Alexandra, and you really can’t help but worry: Can a white male director really succeed in depicting two characters drawn from the most marginalized and stereotyped sector of society, and who initially manifest as comic, outrageous and larger than life?

Opinions about that may vary, of course. If there’s one thing we have learned from the increased trans visibility and social consciousness of recent years, it’s how poorly most of us were informed on that issue (and may still be). I don’t purport to speak truth from the mountaintop, but as I read “Tangerine,” the troubled friendship of Sin-Dee and Alexandra, and their shared struggle, are embodied by Rodriguez and Taylor with immense courage and generosity. These women are not activists or paragons of virtue; they are imperfect people in an imperfect world, subject to errors of judgment and questionable decisions. In that sense they are like everyone else, of course, but the ways in which Sin-Dee and Alex are not like other people, the specific fragility and danger of their lives, are never overlooked or trivialized. Most of us do not attract hostility, mockery and even violence simply by being who we are in public; most of us don’t have to navigate a discordant relationship between biology, identity and social acceptability every single day of our lives.

For better or worse – and I would definitely say better – “Tangerine” is fundamentally a comedy of manners, in which Sin-Dee and Alex emerge triumphant despite the dumb things they do and their shared penchant for romantic dreams, or maybe because of those things. Sin-Dee’s plans for violent revenge against Chester (terrific character actor James Sansone, a Baker regular) and/or his “white bitch” (Mickey O’Hagan) lead to an unexpected denouement that includes a crack-addled conversation about aliens and the government and a climactic confrontation between the lovestruck Razmik and his enraged Armenian mother-in-law (Alla Tumanian), determined to redeem her family honor from “gay prostitutes” she strongly suspects of smoking marijuana. It’s a brief, strange and deeply rewarding trip through an iPhone realm that both is and is not the real world, and one of the most important American films of the year.