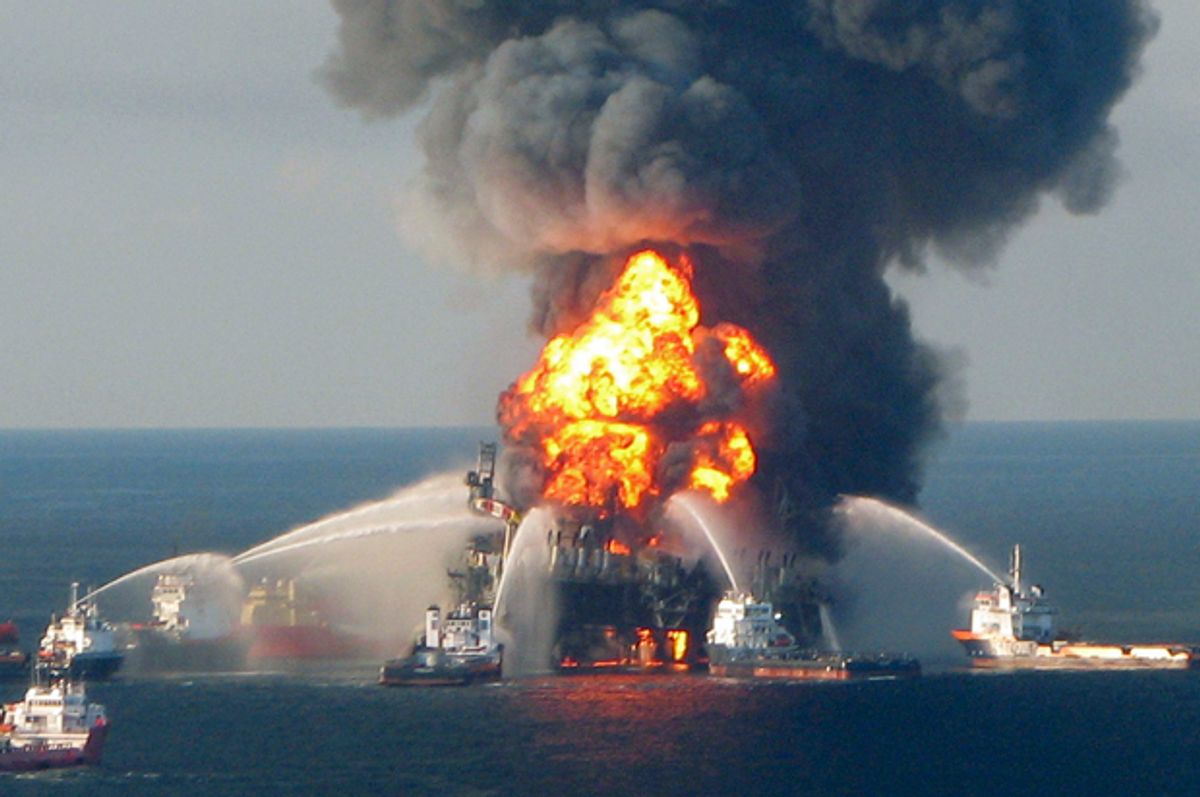 More than five years after the explosion and spill that killed 11 people and spilled millions of gallons of oil into the Gulf of Mexico, BP, at long last, reached a settlement last week with the Gulf states and the U.S. Justice Department to pay for the environmental damages wrought. If approved by a federal judge, the company will pay out $18.7 billion, "the largest environmental settlement in history," over a period of about 15 years.

There's been a sense of finality accompanying the announcement, as well as, perhaps, a sense of resignation. "No amount of money can ever compensate for the staggering damage caused by the 2010 BP oil spill," the New York Times editorial board begins, before going on to argue that all sides should be more or less content with the settlement. Assuming the judge approves the deal, after all, the legal battles will finally be over, restoration can begin.

"No one can say that $18.7 billion is not a lot of money," conceded journalist Antonia Juhasz, who has doggedly followed the spill's aftermath, and who wrote about her trip to the oil-coated bottom of the Gulf in the June issue of Harper's, in an interview with Salon. "Unfortunately, BP also caused the biggest oil spill in world history, and that brings with it a lot of costs, to deal with a lot of very devastating impacts.” A rough calculation of the damage caused by BP, and its liability under the law, reveals just how much it may have gotten away with: the company could have gotten off more cheaply, but it also could have been on the line for $13.7 billion in Clean Water Act fines alone (the federal government originally asked for $18 billion); the settlement includes those fines along with all natural resource and economic damage and restoration claims.

The settlement, Juhasz calculates, only represents "about a third of what BP should have paid, and what the Gulf needs -- and, from my perspective, from what the industry needs." The fines levied in a disaster of this sort, she explained, should not only represent the full extent of the law, and not only provide for full economic and environmental restoration of the areas impacted, but all work as an industry-wide deterrent against future wrongdoing. (BP, remember, was found to be "grossly negligent" in causing the explosion and spill.) As Shell prepares to start drilling the Arctic, it's a lesson that can't be reinforced enough.

It's true BP will be shelling out a total of $54 billion for the entire ordeal. "If that isn’t a deterrent to careless behavior by the oil companies," writes the Times editorial board, "it’s hard to know what is."

But if we know anything about Big Oil, it's probably not.

BP, after all, is already bouncing back. Sure, the company spent five years suffering from the fallout from a disaster for which, to reiterate, it was found criminally negligent. All told, it's had to sell about a third of its assets to cover the liabilities, productivity fell by about a million barrels of oil per day and its market value shrunk by $60 billion. But as soon as the settlement was announced, BP's share prices jumped 4.5 percent. It may legally be able to write off some of the fines in its corporate taxes. And while the settlement doesn't cover a number of smaller, private lawsuits, it does account for the majority of big payouts. The company, whose former CEO was already bemoaning  the inconvenience caused by the spill weeks after it first occurred, is celebrating the prospect of shaking off the Gulf for good.

“Five years ago we committed to restore the Gulf economy and environment and we have worked ever since to deliver on that promise," BP chairman Carl-Henric Svanberg said in a statement accompanying the settlement. "We have made significant progress, and with this agreement we provide a path to closure for BP and the Gulf."

The Gulf, on the other hand, will only now be beginning the long work of restoration that lies ahead. Part of that project, said T. Prabhakar Clement, an environmental engineer at Alabama's Auburn University, is simply determining how much oil continues to contaminate the Gulf -- and it remains unclear how long it will take for background oil contamination levels to revert to where they were prior to the spill.

"There is a perception out there that after five years, everything is gone, that the beaches are clean and we have completely recovered," Clement told Salon -- a non-truth that's nonetheless been argued bp BP itself. Seeing as he's still collecting hundreds of tar balls off the shoreline, he said, "We may not reach the old background level for a long time. Maybe not in my lifetime. That may be a reality of it."

Yet the sentiment persists that residents of the Gulf should feel grateful to have received anything -- a fair assessment, given how fiercely BP fought all of the legal actions taken against it. “I fully appreciate that environmental groups in the Gulf of Mexico, local and state governments, were fearful that they wouldn’t even get anything close to this," Juhasz said. "Particularly when you’re from the South, and the U.S. Gulf Coast, and you’re used to the oil industry getting its way, this looks like a really good deal. And in many ways it is better than what the Gulf Coast is used to getting in its relationship with Big Oil."

On the four-year anniversary of the spill, Salon spoke with Casi Calloway, the executive director of Alabama-based nonprofit Mobile Baykeeper, about the company's relentless campaign to get itself seen as the disaster's "real" victim. “BP probably doesn’t care what the Gulf Coast thinks, because they probably think we’re going to hate them forever,” Calloway said at the time. “We probably will. But at the same time, their image, in all of our eyes, would increase dramatically if they would just settle, and go ahead and let us start doing environmental restoration here.

So how does Calloway feel now that it's finally happened? “From a numbers perspective, I can say of course we wanted more," she told Salon. "But I am more grateful that we have a decision, and that we get to start seriously planning how we are going to do restoration.” She admits that she has doubts about whether Alabama would have ever seen more than the $1.3 billion that comprises its portion of the payout allocated for environmental restoration. The state, to be fair, has never seen that kind of money dedicated to that purpose before -- although, again, it's also never seen this level of environmental damage.

For those working to restore the Gulf, there's little time to spend questioning the settlement. The big challenge now, said Clement and Calloway, is ensuring they make the most of the money that they did get from BP. No one's denying that that isn't going to be an uphill battle: Already, plans to build a $60 million hotel and convention center on the Alabama Gulf Coast sent a worrisome sign that the officials in charge of managing the funds are more concerned with development than restoration, and Calloway stresses that it will be difficult to keep the payouts arriving over the course of 15 years focused on the ongoing project of repairing the ecosystem.

It falls to everyone else, suggests Juhasz, to ensure that BP's misdeeds are not forgotten. "This is about the entire country coming together and saying this is a national disaster," she told Salon, "that we’re all going to stand together and provide the type of counterweight to the oil industry that isn’t common for the Gulf Coast, and that we’re going to stand behind our federal government and uphold our laws." If the judge approves the settlement, there will be a public comment period, which would provide the first of many good opportunities for that.