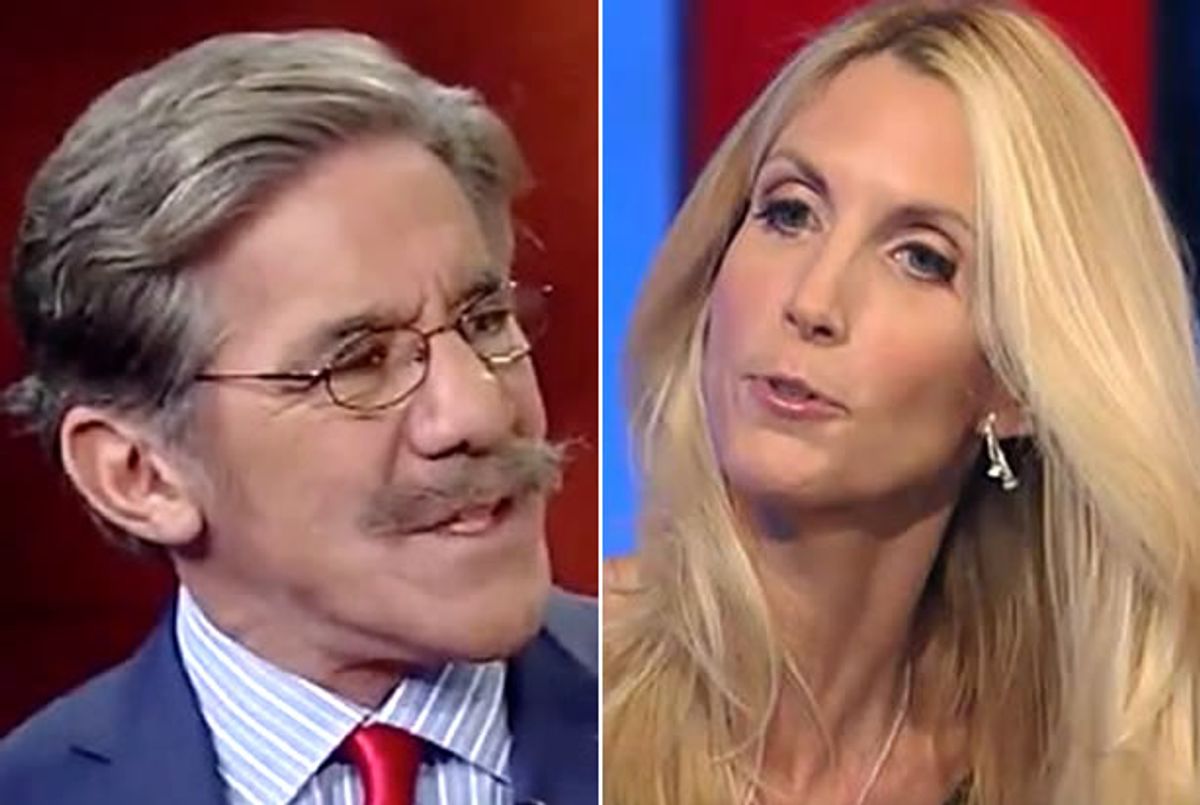 On "Hannity" Thursday night, Geraldo Rivera confronted both host Sean Hannity and fellow guest Ann Coulter on the subject of immigration, so it shouldn't surprise anyone that the conversation was quickly whipped into a maelstrom of bellowing cross-talk by all parties involved.

Coulter began by thanking Rivera for granting that there could be 30 million undocumented immigrants in the United States, even though he only did that for the sake of argument. "The true about immigration is always the same," she said, "the lies are always different."

"We are talking about a group of people who have no right to be here," she said, adding "whether legal or illegal." She didn't clarify as to why legal immigrants have no right to be in America legally, but that's neither here nor there, because Coulter's more concerned with the fate of "native" Hispanics and African-Americans on government assistance. "Why are we bringing in people that we have to help?" she asked. "That's meant for our poor people, and that includes Hispanic poor people, and black poor people. We have to care about our own."

"Is the filibuster over?" Rivera asked. "Let me respond!" And respond he did, noting that rates of violent crimes in the two cities with the highest population of undocumented immigrants -- New York and Los Angeles -- are at historic lows.

"That means nothing!" Coulter interjected. "That's not because of immigration!"

"If undocumented immigrants were more prone to commit crimes," Rivera continued, "why would these cities be experiencing such relative freedom from violent crime. Compare that to Baltimore, Cleveland, Detroit, and other post-industrial cities, where there is a spike in terrible crime, where you should be concerned with violence, instead of singling out this population and ginning up this false fear."

"When you write a book that says 'Adios America,' you are ipso facto attacking Hispanics," Rivera shot back. "Do you really believe the left is conspiring to make this a third-world hellhole? That it's a conspiracy?"

"They’re winning elections now!" Coulter replied. "Obama wouldn't have won elections but for for the post-1970’s immigration, which of course is Hispanic!"

"They were right!" Coulter shouted back. "Not only were they right, we were allowed to criticize the Irish!"

Watch video of the exchange below via Fox News.