“You are not just an affair”: I fell for the world's oldest romantic cliché -- being human

I fantasized that Paris could somehow protect my love with Alexandra. Instead, I lost both the city and the woman 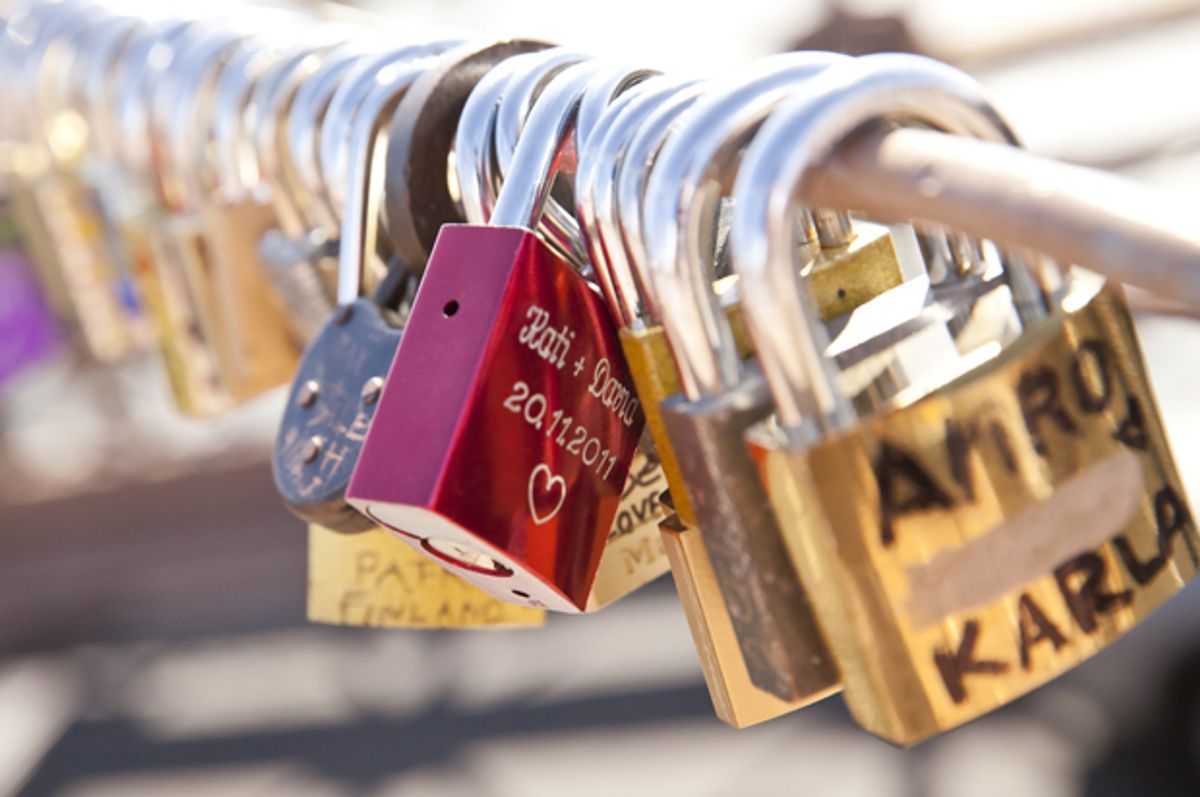 When my lover and I arrived at the Pont des Arts in Paris I immediately wanted to hook a lock with our initials on it to the mass of other “love locks” dangling from the railings on both sides of the bridge.

I took her hand and whispered my intentions into her ear.  She turned her head slowly toward me, and I saw that she was — really? — rolling her eyes.

She looked beautiful in her classic black wool coat, pulled tight around her neck against the October chill.  Her silver hair, with an impeccable French cut, fell dashingly across her face.  I loved that hair.

Now I know that the French had grown weary of the locks on the Pont des Arts.  What began as a romantic gesture by couples in the 2000s had turned into a tourist scourge weighing many tons.  Not only were the locks — quelle horreur — ugly, they were threatening to sink the bridge into the Seine.  In fact, Paris officials recently announced that they are going to cut off the whole lot of them.

But that day so much about Paris was still new to me -- as was my love for Alexandra.

We had just met over the summer in Lesbos, Greece, where I was doing research with a Greek friend for a writing project about Orpheus, whose severed head floated ashore on the island after the Maenads hacked him to pieces. When Alexandra came to Lesbos from Paris to visit my friend, we’d felt an easy closeness that quickly grew into more.  I was single; she was in a very long-term relationship.

Four months later, Alexandra invited me to come live with her in Paris, in the 11th arrondissement.  With no urging from me, she had broken up with her partner of 20 years.

I had never fantasized about being an American in Paris. I had lived abroad in Latin America for several years and traveled widely. I liked Paris, but visiting was enough.  But now I felt wooed not just by Alexandra but also by this unexpected opportunity to live in this great city with a lover by my side.

At 51, I was on a self-created sabbatical from my regular employment as an editor and could consider moving.  I spoke Spanish but no French; Alexandra, who is Greek but has lived in France for three decades, spoke Greek, French and a little English.  I believed the linguistic and cultural challenges would be the fodder of our relationship. We devised a game to play until I arrived, in which we emailed each other one word a day, she in French, I in English, and read them out loud at the same time.  One day she wrote “traversée” (“crossing” or “getting through”); I had written, “unfurl.”

Meanwhile, Alexandra set about furnishing the tiny studio she had rented for us.  Soon I had found someone to stay in my apartment in San Francisco, secured a one-year visa from the French government, and hauled my suitcases up the stairs to our fifth story walk-up.

Looking at the locks, Alexandra stood on the bridge and laughed.  “Mon Amèricaine,” she said, shaking her head and roughing up my hair in her small hands.  We kissed.

While Alexandra worked at her 9-to-5 job at an insurance company in the suburbs, I stayed in our flat writing.  It was a typical no-frills apartment building in the formerly working-class eastern section of the city.  A heavy wooden door opened onto a small stone courtyard crowded on all sides by five stories of windows. Some apartments had been combined into two- and three-bedroom flats with street views, but ours was in the area with one-room units overlooking the drab interior courtyard.

Each day I ventured out cautiously to get to know the neighborhood.  Once I got lost and had to ask a man outside of a bakery for directions back to our street, rue de Montreuil.   He looked bewildered as I repeatedly enunciated “Rue de MonTRILL” (instead of MonTREY). Unable to decipher my mispronunciation, he finally shrugged and walked away.

Once when I decided to splurge on a late lunch at one of the many trendy restaurants in the area, the maître d' informed me in perfect English that, “In France, Madame, we serve lunch between 12 and 2.”  It was 3 p.m.

But in the evenings and on weekends, with Alexandra as my guide -- I shed my awkwardness. We submerged ourselves in les passages couverts, the glass-covered shopping arcades where we found everything from rare stamp dealers to African hair braiding salons. We watched fashion models fishing on the Canal St. Martin and twirled to tuba and accordion music on the sidewalk in Belleville.

On our outings, we stopped often for coffee or wine, always accompanied by a cigarette. And we shopped — at grocery stores, cheese shops, produce markets, department stores, boutiques, Tabacs.

My French was still awful but taking cues from Alexandra, my body started to feel a little bit Parisian.  I bought a few pieces of well-tailored French clothing and always accessorized with a scarf; I tempered my smiling at waiters and didn’t touch the shoes or clothes in the window display in boutiques.  Being able to employ this simple body language in public spaces gave me confidence.

One day I bought a large map of Paris and tacked it up in our studio. I stared at the great circle of 20 arrondissements.  So many places now sparked memories — Christmas dinner with friends in Montemartre, a screening of Cocteau’s “Orphée” at the Cinémathèque Française in Parc de Bercy.  That afternoon, I met Alexandra at what we now called “my café.” After visiting a corner bistro near our house for several months, the waiters had finally adopted me as a regular, greeting me with a kiss on each cheek.

That evening we talked about how fortunate we were that we got along in our absurdly small flat.  The kitchen cubby was so petite the only place for the dish drainer was on top of the stove; we folded our “clic clac” – the French word for sofa bed -- each morning in order to get to the bathroom.

Rather than chafe, we choreographed our domesticity.  We kept our belongings neat and in their place, got dressed one at a time to avoid bumping into each other, smoked out the window.  Outside and inside, Paris was starting to feel like home.

“Are you sure you’re ready?” I had asked Alexandra many times over the summer in Greece.  “I don’t want to be your rebound relationship.  You know what rebound means, right?”  We were lying on a beach sipping a frappé in the late afternoon when vacationing Greeks like to return to the sea after their naps.  She assured me, in her smoky French-Greek accent, that she understood.

She was ending a long relationship to be with me.  Of course I was concerned.  But a mutual friend had told me “you can trust Alexandra.”  She was stable, thoughtful, wise -- qualities I wanted in a partner.

When I had returned to San Francisco and was still considering joining Alexandra in Paris, I worried out loud yet again to her over Skype about her availability.  She was perched on a stool smoking a Marlboro; after a long minute she exhaled slowly and looked directly at me from the screen.  “You are not just an affair.”  It was her truth at the time — and it was what I, of course, wanted to hear.

In February, I ripped the map off the wall.  It was Valentine’s Day and she had not quite rolled her eyes, but sort of flinched, when I gave her a gift at dinner.  As with the locks, I interpreted her reaction as discomfort with my American sentimentality. But this time my denial didn’t last. Though I had moved halfway across the world to be with her, she could “not commit.”

As I tore at the map, I felt I was literally stripping memories out of my body: strolling the gardens of the Palais Royal with cappuccinos on Sunday morning; margaritas after work at La Perla in the Marais; thé à la menthe at our favorite Arab café by the marché d’Aligre.

Is it possible to separate our lovers from the places where we love them?

I had spent seven months opening myself up to Alexandra at the same time I slowly tried to make Paris my home. In the tender manner of a lover with senses attuned to every new experience, I had fallen for both.

I lost two cities, lovely ones. And, vaster, / some realms I owned, two rivers, a continent.   Loss cascades in Elizabeth Bishop’s poem “One Art” from the fluster of lost door keys, to those cities and continents, to even losing you.  It cascades — then fuses into one sensual memory.

In May, almost one year after we had first met, I came back to San Francisco and began the unraveling. Alexandra did love me, she insisted; it’s just that, well, her past had the bigger claim on her heart.

She left me, and Paris had abandoned me, too.

At first my pain was grandiose — in exact proportion to Paris’ exalted reputation as the supreme backdrop for romance.  Like so many before me, I had fantasized that the city’s beauty would elevate and somehow protect my love affair.  To fail in love in Paris was especially pathetic, I whined to myself.

But soon I tumbled into the real despair, in exact proportion to my love for Alexandra, as symbolized by the padlocks.  We never did hang one on the Pont des Arts -- but in my heart I did.  Like all those other romantics, I didn’t care if the lock was a cliché.  It was a talisman of possibility, of the hope that love, our love, might endure.

I read now that the masses of over 1 million hardened metal locks inscribed with lovers’ initials that the workers recently cut off the bridge weighed some 45 tons – as if all that longing was somehow quantifiable.

I want to say that I’ll never go back to Paris.  The memories are too painful.  And that I will never again be so gooey-eyed that I would consider hanging a dumb “love lock” on the Pont des Arts, or any other piece of architecture for that matter.

Of course that might come true.  But I doubt it.

The Pont des Arts may be free of locks for now. But the messy and ultimately futile human desire for permanent connection to people and place cannot be contained.