Sports saved me: I was skipping lunch in middle school -- until I realized I wouldn't be allowed to play if I had a "problem"

No more dieting, no more trying to look a certain way to please men -- my body is strong and beautiful and mine 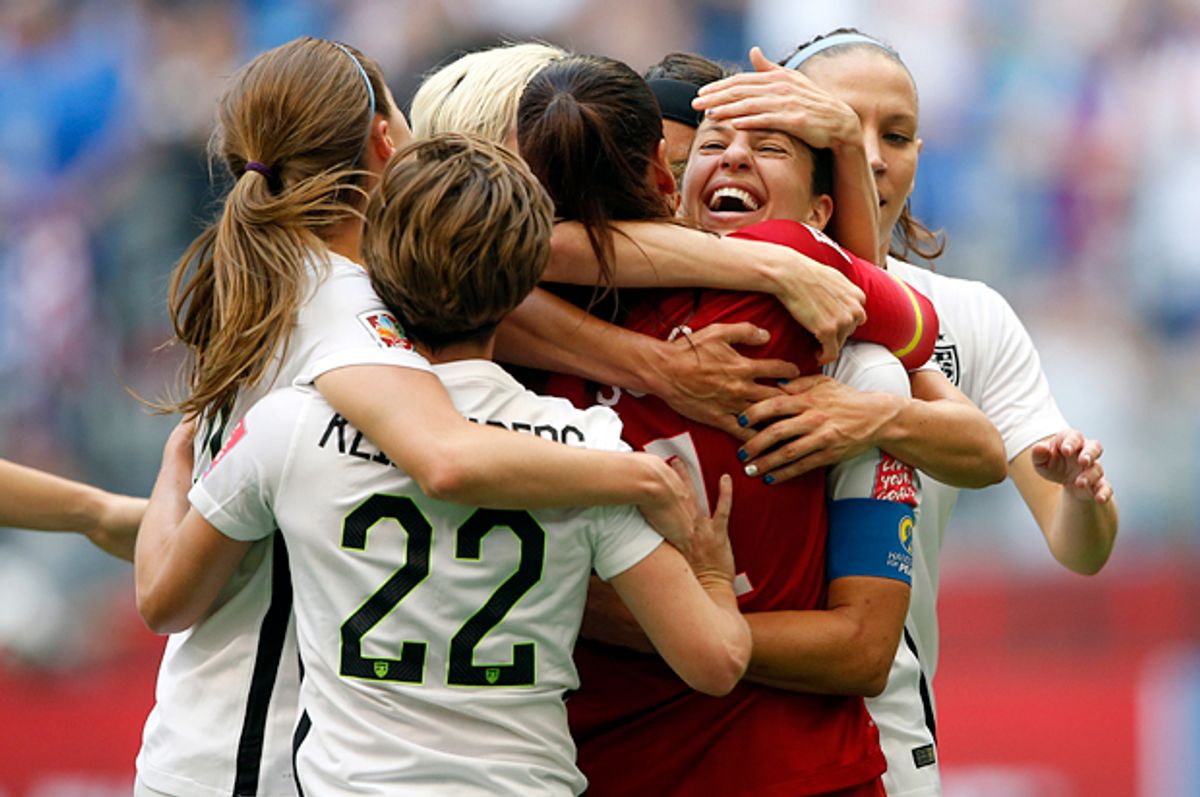 Carli Lloyd celebrates with teammates after scoring against Japan in the final of the FIFA 2015 Women's World Cup, Jul 5, 2015. (Reuters/Michael Chow/USA Today)
--

I'm incredibly lucky that I grew up in the post-Title IX era.  I was always an athlete — first playing softball and basketball, later cross country and track, before I found my true love in crew and had the good fortune to row in the varsity boat for four years at Bryn Mawr College.  Since graduating, I’ve run the Philadelphia marathon twice, and consider my workout routine a priority.

I owe my love of sports largely to my mother, who was in the first class of Title IX athletes, captain of the Penn State women's field hockey team, and competed at the international level when her options were much more limited.  My mother, and the other women before me, fought tooth and nail for increased recognition of women's rights in sport.  Due to their efforts, being an athlete was much more accessible to me than it was to them.

But revelations of the incredible wage and equipment disparity between women and their male counterparts during this year’s Women’s World Cup reveals we still have a ways to go. That despite incredible progress, the power of women’s sport is not something we fully value.

Sports teach a remarkably important lesson to a woman -- that her body is a powerful tool for her to train and apply as she pleases to support goals totally and utterly independent from anything to do with men. It is one of the most feminist things a woman can learn -- that her body is strong and beautiful and hers.  There are so many pressures forced upon women's bodies in our world -- so much of our worth given to looking a certain way to please men.  So much judgment and legal attack around the choices we make with our bodies that assert they are not really ours to make choices about.

Sports literally revolutionized how I thought about my own body.  Sports helped me appreciate my strength and self-worth in a way I will be forever grateful for.

When I was in middle school, a friend of mine began measuring her waist and arms and legs with a measuring tape.  She started encouraging me to do the same. For a brief period of time I did. I started skipping lunch and taking measurements of my limbs and waist every morning.

But very quickly, sports saved me.

At my school, you had to pass a physical every year in order to be cleared to play.

The year of my experiments with a measuring tape, my physical revealed that I had grown almost two inches and lost a pound. I remember the doctor asked me how I felt about food and if I ever felt lightheaded.

I very quickly realized that he might not clear me to play if he thought I had a "problem." So I laughed and assured him I did not. The next day I threw out the measuring tape.

I wish I could say that it was a revelation there and then that my body was beautiful and strong and I was worthy, no matter what. But it wasn't. Over time, though, sports helped teach me that lesson.

After dislocating my left shoulder a couple of times playing basketball my junior year of high school I had what would be the first of two surgeries to repair it.  In this injury, sports taught me that winning isn't everything, that your body must be loved and trained responsibly, and the discipline and focus demanded in my recovery -- combined with my desire to get back into the game and the supportive messages of my coaches, teammates and parents -- finally sank in.  And my love and respect for the competition, my love and respect for the game, finally led me to love and respect myself too.

My teammates taught me loyalty, selflessness and dedication.  Being a collegiate athlete at Bryn Mawr was like having a second family.

Clearly there are reasons that recent commentary on the pay of U.S. World Champion female soccer players hit a chord with me personally, but even outside of my circumstances I think it should matter.

Because in any other industry, it would be considered ridiculous for women to work full-time, at not insignificant personal risk, and be paid $6,000 a year.  A recent article in the Atlantic does an amazing job of attacking the chicken-vs.-egg argument that if there were more of a market for women's sports they would get more airtime and higher pay. But the fact that the media assumes there is no market is itself steeped in bias.  The example of the Portland, Oregon, women's team is so telling: The team is co-managed by the same organization that manages the men’s team and they promote both in merchandise and advertising in the Portland area -- and the Portland stadium is regularly filled and they can afford to pay their athletes a livable wage.

And that is really the crux here; I don't think athletes anywhere should be paid the obscene amounts many are.  But we should still pay people who are great at their jobs at a level that reflects that. And the fact that the Women's World Champions are paid one-quarter of what the men who lose in the first round are paid shows we simply do not.

That still, in this day and age, when a woman wins a world title we think that's worth less than a man losing one.  That women’s bodies, in one of their most revolutionary expressions of power, are still deemed less valuable.

That is so dumb.

Rant over. This is what happens when I don't run for five days.