If you don't "get" what Harper Lee is doing in this sequel, you need to "go to racial rehab," Kevin Jackson said 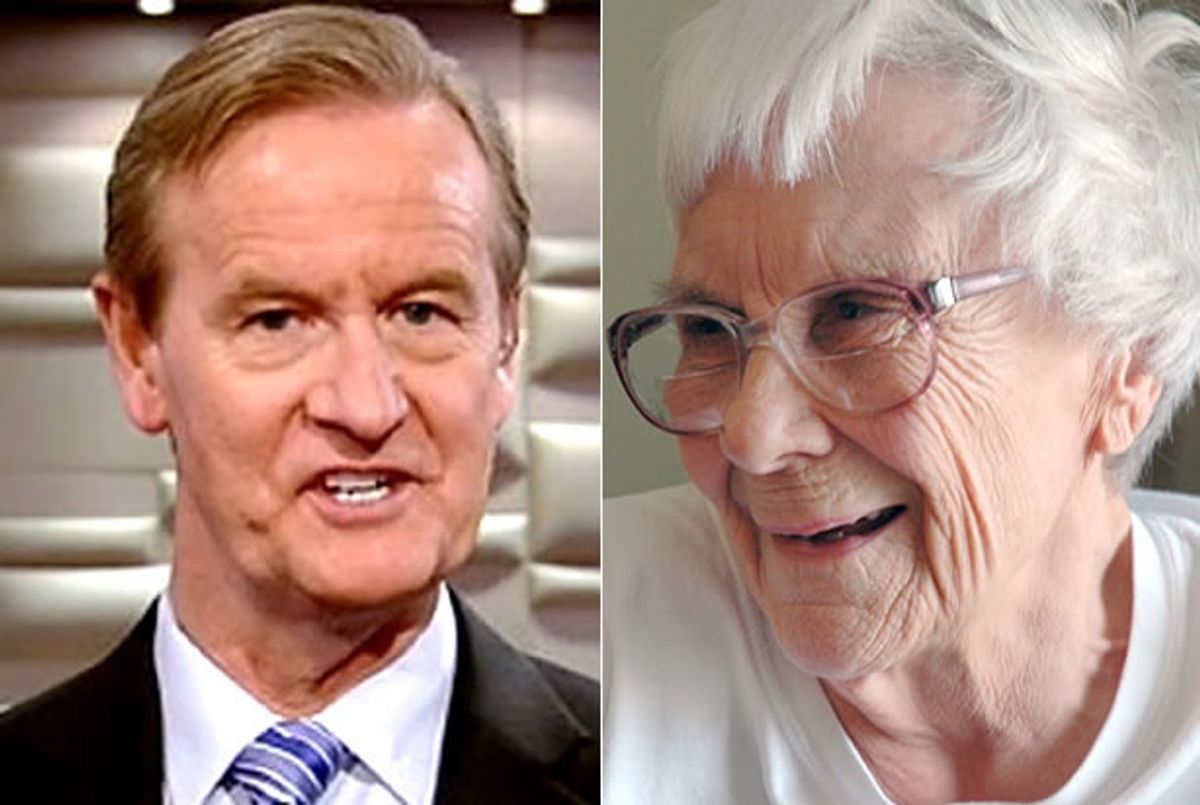 On "Fox & Friends" Monday morning, "Race Pimping" author Kevin Jackson told co-host Steve Doocy that Harper Lee's new novel, "Go Set a Watchman" -- a sequel, of sorts, to her beloved "To Kill a Mockingbird" -- is trying to "fit a politically correct narrative of today," a remarkable claim given that the heretofore unpublished novel was written in 1957.

The novel features the main players from "Mockingbird," as it recounts Scout's return to Maycomb, Alabama and her disappointment at finding that paragon of principled idealism Atticus Finch has become a radicalized supremacist in the wake of Brown v. Board of Education. "The Negroes down here are still in their childhood as a people," he says at one point. "Do you want Negroes by the carload in our schools and churches and theaters? Do you want them in our world?" he asks at another.

"I just don't get it," Doocy said, before asking Jackson why Lee would "would reveal that he's not a hero at all, but a racist? Why the revisionist literature?"

"If you don't get it," Jackson replied, "you need to go to racial rehab. The idea of taking Atticus Finch, who was an iconic character and doing what I call 'revisionist literature' -- because this is revisionist fiction, this isn’t even real."

"To make him into a villain," Jackson continued, "the real underlying meaning is that even when a white guy does good for a black guy -- which is what Atticus Finch did in trying to save the life of the black man in the book -- he still has an underlying tint of racism. I think that's the sad part."

"It’s almost that they want to bring it into the forefront and take this guy that’s become and iconic hero of the Civil Rights Movement and make him a racist in the future now," he added. "It fits a politically correct narrative of today."

Steve Doocy was clearly befuddled, both by her decision to publish the book and by the fact that the sequel was written prior to "Mockingbird." "I just don't get why she would put this out," he said. "I get people wanted her to write another book for decades. And now instead of writing another book, she’s putting this out which was the book she wrote before ‘To Kill A Mockingbird’ and people are going, ‘This changes everything.'"

Jackson admitted that he also dosn't "know the timeline, but to finish it in this way after America has come to love Atticus Finch -- and I think if you just read the novel it’s one thing, but to see Gregory Peck play it, there’s nothing racist about Gregory Peck."

"We all seen the movie a million times," Doocy said, "and we all had to read the book growing up, and now to think of Gregory Peck-Atticus Finch became a racist when he got older, it's like, 'Wow, what happened to him?'"

Being that he is an expert in the intellectual development of fictional characters, Jackson felt justified to reply that "that's not the way it happens. There are many stories of people who started out thinking a particular way about people and they changed over time, and generally, you find that he would soften over time.”

Because, of course, there's absolutely no reason that everyone from Edmund Burke to Benjamin Disraeli to Winston Churchill has been proposed as the man who first uttered the sentiment that reads, generally speaking, "a man who's not a liberal at twenty has no heart, but a man who's not a conservative at thirty has no head." No reason at all.

Jackson conlucded by noting that he thinks "that it’s a statement of our times that she would do something like this" -- and just in case you forgot what "this" is, it's write a book in 1957 that's apparently so prescient it perfectly aligns with political correctness as defined by conservatives today.

Watch the entire conversation below via Raw Story.