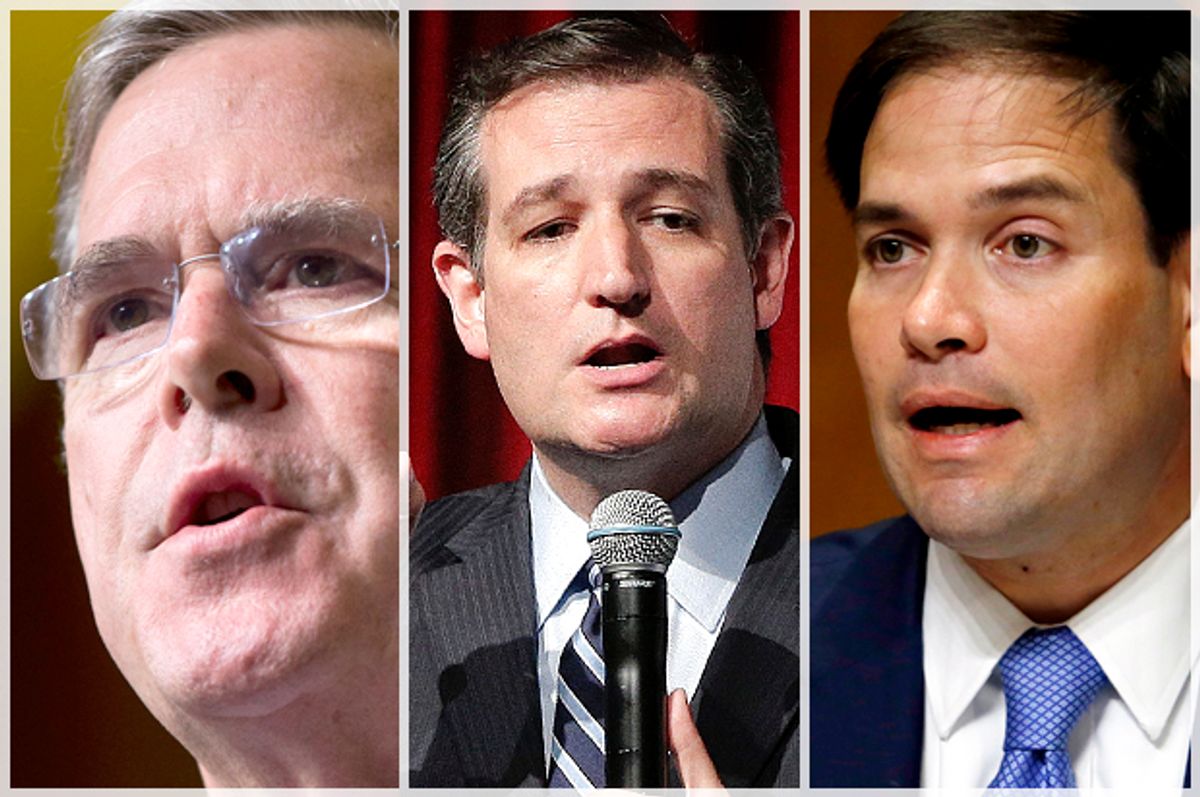 President Obama called congressional leadership last night ahead of today's early morning announcement that the U.S. had reached an agreement limiting Iran's nuclear program. But still, House Speaker John Boehner called the deal "unacceptable" and vowed that House Republicans would do all they can to stop it today. On the campaign trail, Hillary Clinton told a closed door meeting of House Democrats today that she supports the framework of the deal and called the deal "an important step" in brief remarks while Bernie Sanders was even more effusive in his praise for the deal, tweeting that the deal was "a victory for diplomacy over saber-rattling" but their 2016 counterparts across the aisle were expectedly not as supportive.

Here are the reactions of the 2016 GOP presidential field:

Bush tweeted out a video clip of his interview with Christians United For Israel yesterday slamming the deal as "appeasement":

We need to have a deeper debate about this and the recognition that past is prologue. History is full of examples of, when you enable people – regimes – that don’t embrace democratic values, without any concessions, you get a bad result. It’s called appeasement.

Bush doubled down on the appeasement claim in a statement today. "This isn’t diplomacy – it is appeasement," he wrote.

Florida Senator Marco Rubio was one of 47 Senate Republicans who signed a letter to Iran’s leaders urging against a deal and today Rubio released a statement continuing his opposition to the deal:

I have said from the beginning of this process that I would not support a deal with Iran that allows the mullahs to retain the ability to develop nuclear weapons, threaten Israel, and continue their regional expansionism and support for terrorism. Based on what we know thus far, I believe that this deal undermines our national security.

Cruz told an audience gathered at the annual summit of Christians United for Israel in Washington on Monday that “President Obama and John Kerry and Hillary Clinton are perfectly fine with Iran having a nuclear weapon.” Cruz made the perfunctory conservative comparison to Munich, saying "They should really be conducting these negotiations in Munich and coming back with an announcement about peace within our time.”

“Negotiations have gone from bad to worse to catastrophic,” he argued before calling the Iranian nuclear program “the single greatest security threat facing the US today.”

“This deal has become a research and development program for the Iranian nuclear program. Under the terms we know, the Obama administration has already given up the entire store, and they are pushing it as a partisan political issue,” he continued. “The president’s approach from day one on Iran is that he wants a political legacy and doesn’t particularly care about the terms of the deal.”

Graham made the media rounds today to blast the deal today. Graham called the deal a "death sentence for Israel" in an interview with CNN, slamming Obama for being "reckless in the Mideast."

It’s incredibly dangerous for our national security, and it’s akin to declaring war on Sunni Arabs and Israel by the P5+1 because it ensures their primary antagonist Iran will become a nuclear power and allows them to rearm conventionally,” Graham told Bloomberg shortly before Obama's announcement. In another interview, Graham blasted Republican rival Rand Paul as the only GOP candidate who fail to stop Iran from developing a nuclear weapon.

Former Arkansas governor Mike Huckabee hit the Obama administration hard for it's attempts to negotiate an international deal, getting personal when he told a crowd of evangelicals in Washington on Monday that "John Kerry should have long ago gotten up on his crutches, walked out of the sham talks, and went straight to Jerusalem to stand next to Benjamin Netanyahu."

He then tweeted his opposition to the deal following Obama's announcement:

Earlier this week, Huckabee released an ad replaying Lyndon Johnson's famous "Daisy" ad, warning that “a threat to Israel is a threat to America" and calling for Sec. Kerry to “reject a nuclear Iran.”

“If Secretary Clinton goes along with President Obama’s efforts to appease Iran, it will make our enemies stronger,” Jindal argued.

Rick Santorum slammed the deal on CNN  as a "a catastrophic capitulation" by the president and claimed a Santorum presidency would have gotten a better deal. "I would have ratcheted up those sanctions," Santorum argued. "I would have continued to put pressure on this regime to capitulate. What we have here is not a capitulation."

New Jersey Gov. Chris Christie said in a statement that Obama wass "playing a dangerous game with our national security", warning that the deal "will lead to a nuclear Iran and, then, a nuclearized Middle East."

The deal threatens Israel, it threatens the United States, and it turns 70 years of nuclear policy on its head," Christie said.

Speaking to the same group of conservative Christians in Washington, D.C. on Monday, Pataki described sanctions relief as “an incredibly stupid policy that I hope doesn’t come to pass.” He told the audience that the US “should do everything we can to destabilize the Iranian administration.”