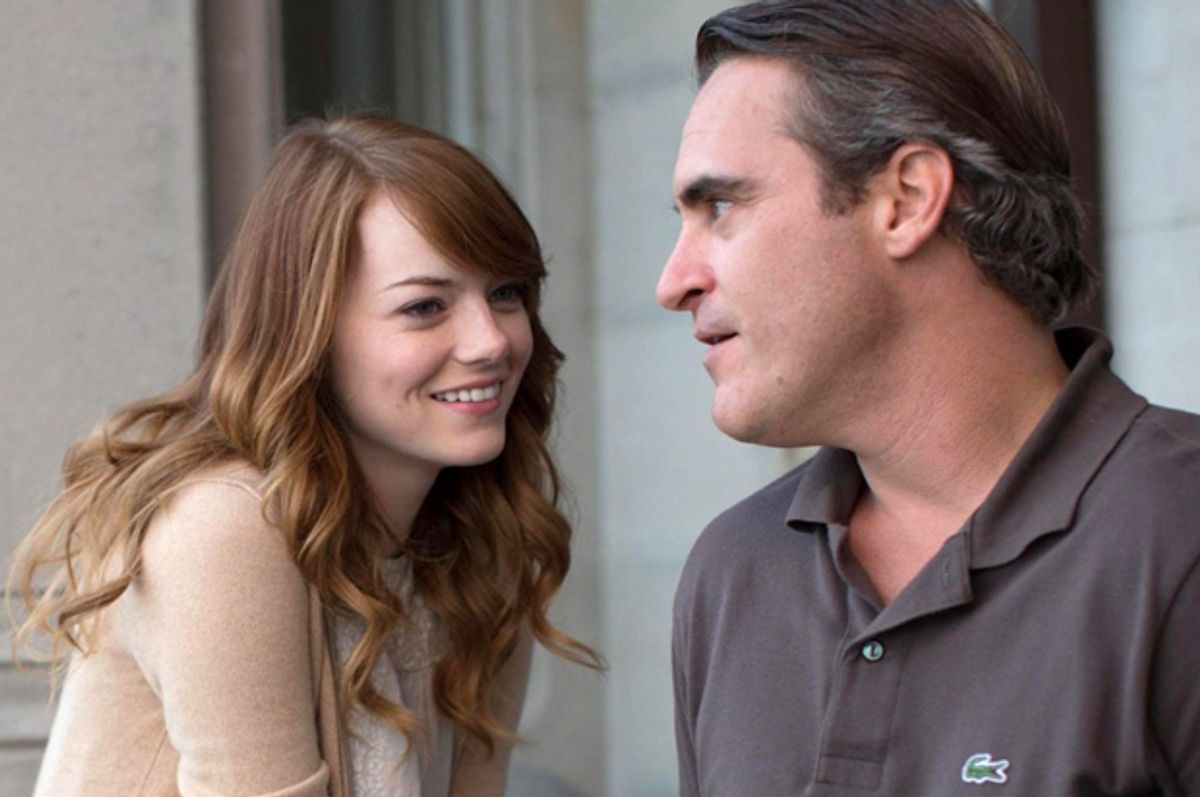 If you can get past the inherent dread that comes along with yet another Woody Allen movie about a love affair between an older man and a younger woman, then “Irrational Man” – by my count, Allen’s 245th feature film – is a pretty entertaining entry in the genre. I express no firm view as to whether you should get past that dread, in moral or personal terms. My profound summary of the relationship between an artist's work and what we know, or suspect, about his or her private life, is this: It's complicated. The two are never entirely unconnected, but they're not the same thing, nor should they be seen as explaining each other. (In the case of Woody Allen, I have already explored this question at length.)

To wend our way back to the present topic, some people may suggest that my count is exaggerated, and that Allen’s films only number four dozen or so. Who can say? Since he’s basically been repeating variations on a theme for the last 30 years, the movies all start to blur together into an undifferentiated mass of conflicted intellectual heroes, wide-eyed nymphets and ill-conceived criminal schemes. A few years ago at a Cannes press conference, I witnessed Allen unable to remember the title of one of his own movies. (It was “Melinda and Melinda,” and the rest of us have done our best to forget it too.)

“Irrational Man” bears many of the nettlesome identifying marks of a late Woody Allen picture: Its plot is lazy and lumbering and then turns nonsensical, when Allen tries to introduce a couple of Hitchcockian twists. You have the feeling it was directed by a piece of software, programmed to make roughly the same choices as a human being who understood cinema, but without knowing why. (To be fair, the images are pristine and often gorgeous, captured by ace cinematographer Darius Khondji on old-school 35mm film.) For reasons of her own, Emma Stone has now served as Allen’s ingénue in two successive movies, and if “Irrational Man” is worlds better than the offensive and downright incompetent “Magic in the Moonlight,” Stone is still playing the abstract idea of a lovestruck young woman rather than a recognizable human being with complex motivations.

Much of the appeal of “Irrational Man” resides in the dissolute charm of Joaquin Phoenix as an unusually charismatic Woody-surrogate, a debauched philosophy professor named Abe Lucas who descends upon a small Rhode Island liberal arts school with a flask of single-malt Scotch in his back pocket and a colorful reputation trailing behind his Volvo wagon. Everyone on campus understands from the beginning that Abe is likely to sleep with a student and screw things up, and furthermore it’s pretty clear that Jill, the ambitious undergraduate played by Stone, is likely to be that student.

But Abe’s trajectory, and the story of “Irrational Man,” is nowhere near that straightforward. Allen’s writing is always better when he’s at his most malicious and manipulative, and this deeply dark-hearted little film (with its deceptively sunny and picturesque locations) is a case in point. Allen keeps us waiting quite a while for the consummation we know is coming: Despite his long career as a womanizer, Abe has no intention of tumbling into bed with Jill, or even with Rita (Parker Posey), the more age-appropriate chemistry professor who keeps flinging herself in his path. Let’s give Allen full credit, by the way, for casting Posey as this wounded, sexy and emotionally rich middle-aged woman, a character enormously more interesting than Jill. Posey attacks the part with ferocity, and in the version of this story where Rita successfully convinces Abe to run away to Spain with her, I would willingly follow them.

Abe is simply too depressed, too drunk and too immured in self-loathing to pay much attention to Rita or Jill or anyone else. He has committed himself, more or less purposefully, to a downward trajectory from being to nothingness. If Allen’s dialogue, as usual, explains what the characters are thinking in literal and dunderheaded fashion, we don’t need that in Abe’s case. Phoenix embodies him as a handsome rake with a spreading beer belly, a first-rate intellect now convinced of his own mediocrity. He lectures on Kierkegaardian despair and inhales it, without (as he observes) the Christian moral sensibility that allowed the gloomy Dane to keep going. His book on Heidegger and fascism, a topic suggesting the thorough corruption of 20th-century philosophy, will never be finished. He plays a game of Russian roulette with a loaded revolver at a student party, proclaiming it an “existential act” and not much caring whether he wins or loses.

An overheard conversation at a diner drives Abe toward a more elaborate existential choice, one that reawakens his lust for life, not to mention his erotic interest in both Jill and Rita. Nothing about this turn of events is even remotely plausible, and damn near all the plot devices and moral conflicts of “Irrational Man” are recycled from earlier Allen films, mostly the “serious” ones like “Crimes and Misdemeanors,” “Husbands and Wives” and “Cassandra’s Dream.” As a general rule, though, I prefer Allen in this mock-Dostoevsky zone of undisguised misanthropy than in his supposedly lighthearted comedies, which feel increasingly awkward and deranged. Even in a loose, rambling, imitative vehicle like this one, Allen remains able to view a disordered character like Abe, who makes terrible choices and does unforgivable things, from a dispassionate distance, engaging both our sympathy and our horror.

I can’t say that Allen depicts academic life much more convincingly than is typical in the movies; Abe isn’t all that far, sad to say, from the English professor played by Mark Wahlberg in “The Gambler.” But Allen does possess at least a cursory knowledge of the philosophers Abe supposedly teaches, and has long been fascinated by a central quandary that threads through their dense theses: What good is the moral and intellectual freedom for which we have labored so hard, when the universe seems determined to play cruel tricks on us and the story always ends the same way? Abe is like a guy in a Greek myth or a Saki short story, whose decisions have already been made and who cannot outrun his fate. If Allen identifies with him, it is first and foremost with the depressed and drunken early Abe, the one who’d just as soon shoot himself as teach another class or screw another undergrad. That Abe’s view of himself and the universe was correct all along.