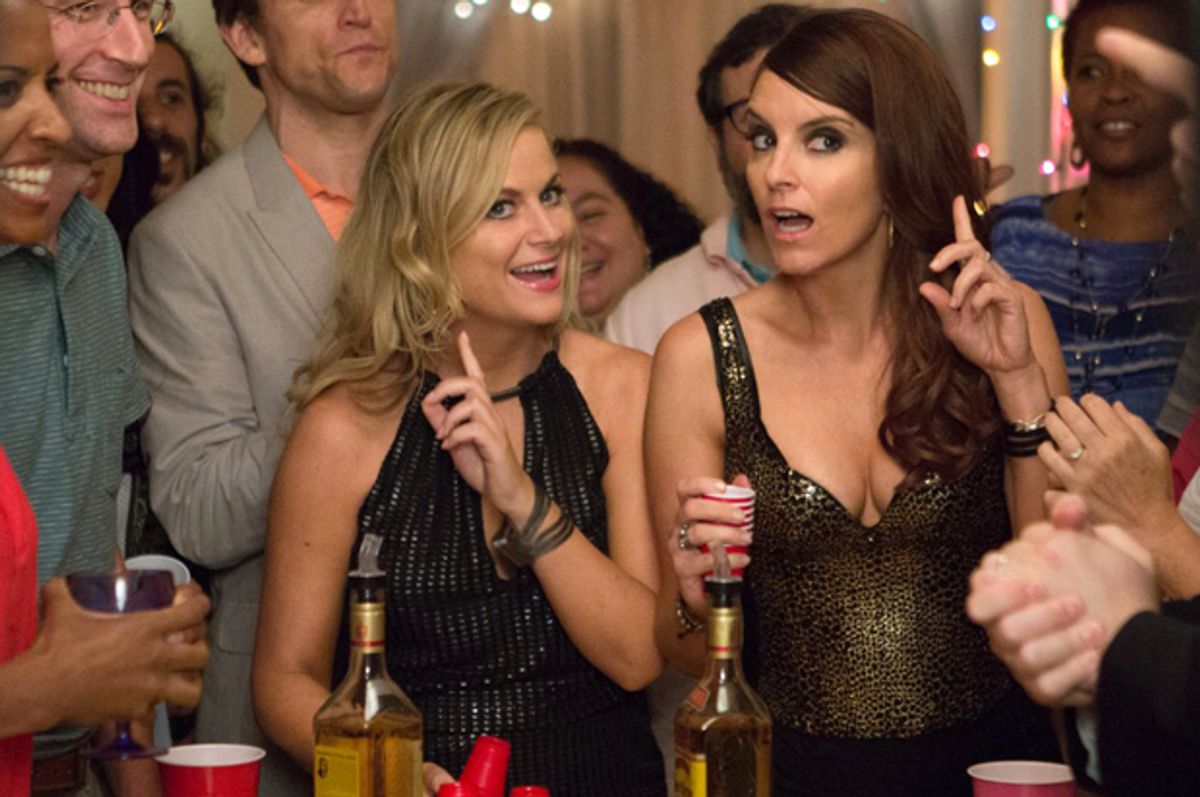 The Tina Fey and Amy Poehler Friendship Industrial Complex is as robust as ever. Magazines churn out regular odes to their highly publicized best-friendship, while everyone from Lorne Michaels ("Weekend Update," 2004-06) to the Hollywood Foreign Press ("The Golden Globes," 2013-15) has lined up to capitalize on the pair’s winning chemistry and book them for a joint hosting gig. So it seems like savvy business sense that Universal would green-light “Sisters,” a movie where the pair play grown-up sisters who go back to their childhood home to throw one last rager. The film has everything fans want from their Tina and Amy team-ups: Platonic sisterhood made literal, an odd couple pairing, goofy dance-offs, wacky outfits, rampant hedonism, celebrity cameos (Maya Rudolph, Ike Barinholtz, Samantha Bee, Bobby Moynihan, etc). It also looks -- sorry! -- like kind of a bad movie.

Before I go any further with my (admittedly tentative and pre-emptive) criticisms, I just want to say that I love these women. And I’m not just saying this to protect myself from being drawn and quartered by the Feygency -- I legitimately love them. This is semi-embarrassing to admit, but Tina Fey was my desktop wallpaper when I was in middle school. Back when I had a PC desktop. On my desk. I met Amy Poehler waiting outside “SNL” when I was fourteen (Host David Spade, musical guest Jack Johnson, March 2005, 2/5 stars) and I cried real tears because I was so happy to meet her. These were my comedic idols and I have loved watching the world come to appreciate them as I once did, feeling an almost maternal pride (age discrepancy be damned) as they have risen to become two of the biggest names in comedy. And the adulation they receive is completely warranted: Tina and Amy have been pioneers of a new breed of smart, feminist TV comedy, producing some of the most groundbreaking sitcoms in recent years, from the ventures they developed and starred in ("30 Rock" and "Parks & Rec," respectively) to their more recent forays working behind the scenes ("Unbreakable Kimmy Schmidt," "Broad City"). While all these shows are adored by comedy fans, they never found huge audiences, because the comedy was too niche and clever to be packaged and consumed en masse: Sly, edgy, smart, subversive, absurd.

“Sisters” — written by “SNL” writing vet Paula Pell and directed by "Pitch Perfect's" Jason Moore — looks like the exact opposite of the projects that made them great. It’s notable that as both Tina and Amy seemed to move away from acting (not either of their primary strengths, in my opinion) to take on more behind-the-scenes roles, here we have them at the front and center of a splashy blockbuster comedy they didn’t seem to have much creative involvement in. That, for starters, makes me worry about how transparent an effort this is to capitalize on their eminently marketable BFF brand.

And judging from the trailer, it doesn’t seem to do so in a way that plays to their strengths. From the opening salvo — where they greet each other with “Hey girl!” “Heyyyy!” in high pitched valley-girl voices — the whole thing reads like poorly-written Tina and Amy BFF fan-fiction. It’s fitting, in a movie about regression, that the movie itself feels like a regression to their last ill-fated big-screen collaboration — the disappointing odd-couple comedy “Baby Mama,” one of the pair’s greatest missteps — and a world away from the cerebral wit of Leslie Knope and Liz Lemon. Maybe the trailer doesn’t do the film justice, but the jokes here feel slapsticky, broad, and totally off brand: Trying on dresses where their boobs fall out, setting things on fire, falling through ceilings, having ridiculous hip-hop dance-offs, and issuing punny sexual innuendos like “I bet working on other people's bushes makes you wanna whack your weeds.” Where are the women who gave us Galentine's Day and Lizzing (a combination of laughing and whizzing)? Why is Tina Fey wearing hair extensions and hanging out the top of a sunroof in a camo tank-top like a wasted teen at after-prom? Why are they doing a synchronized dance-off to a David Guetta song? And for the love of God, why are we dragging poor Maya Rudolph into this mess?

Which brings me to the casting: I’m just really not sure what they’re trying to go for here. Fey, the weaker actress of the two, shines best when playing some loose version of herself: Cerebral, discombobulated, acid-tongued. Dating back to her “SNL” days, she has always been at her funniest when she lets her zany intellect shine through, not when she forces herself into dumbed-down slapstick. So the choice to peg her as ditzy, heavy-drinking woman-child prone to wearing printed graphic tees and saying things like "you're the type of badass that I am susceptible to" just seems wildly ill-conceived. Conversely, pegging Amy as the buttoned-up straight woman seems a waste of her talents as a virtuoso of voices and gestures and wild characters. To be fair, it's the opposite dynamic of "Baby Mama," where Tina was the straight woman and Amy the wacky one, but that doesn't mean it works. Both of these women are too talented to be flattened into broad comedic types, which appears to be exactly what Pell and Moore are doing with "Sisters."

And yet for all my reservations, the reaction to trailer was almost universally positive. The media seems preternaturally disposed to embrace any Tina and Amy™ project with open arms and ample smiley-face emojis. Why? Because the trailer is a literal enactment of everyone's fantasy vision of their BFF-dom (and arguably, a projection of our imagined friendship with them). Cosmo dubbed it "too hilarious to be real" while USA Today declared the movie to be everything they've "ever wanted in life": "Tina and Amy dancing, Tina and Amy hugging, Tina and Amy shopping together, Tina and Amy throwing a party together, Tina not getting drunk so Amy can get drunk, Tina and Amy making ridiculous sexual innuendos." That's exactly my worry about the film: It seems much too concerned with Giving The People Everything They Want, playing into fans' reified concept of Tina and Amy's relationship as two grown, goofy best friends who party like teens and have epically choreographed synchronized dance-offs. What it doesn't appear to do is highlight what makes them special: As actors, as comedians, or as a duo.

Of course, I’m getting way ahead of myself. The movie might be great, and maybe I’m just getting overprotective over my teen idols, two grown-ass women who can fully make their own choices about what movies to star in. We’ve seen men cash in on the Friendship Industrial Complex time and time again ("Anchorman 2," all the "Hangover" movies, anything with Rogen and Franco), and there’s no reason that Amy and Tina shouldn’t be able to do the same. And of course, I'm all for more female-led comedies, given how few and far between they are. I just hope the finished product is funnier than the trailer suggests: Not because Tina and Amy are women, but because they are the smartest and the funniest, and they deserve better.