This is how you attack institutionalized discrimination: The FDNY's long road to racial diversity

Decades after fight for racial parity began, the FDNY is finally making progress -- and its example is instructive 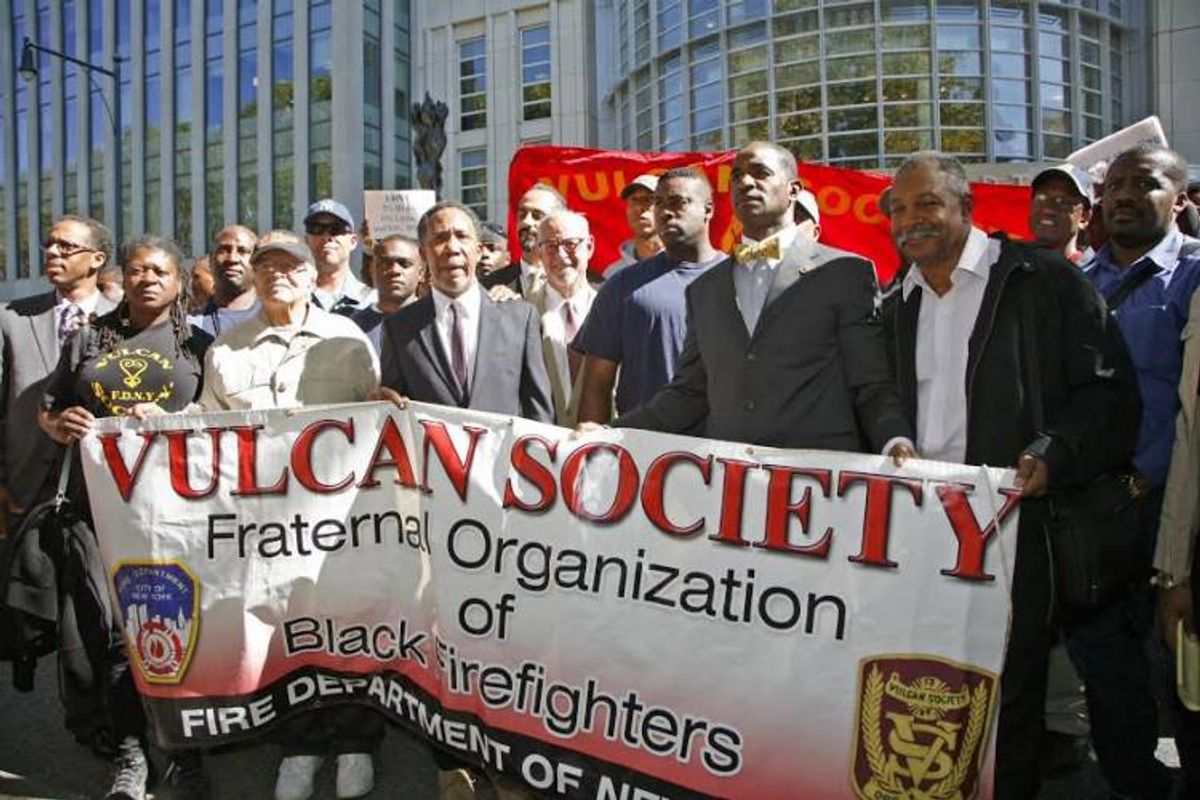 Black firefighters and Vulcan Society members celebrate the ruling in their favor outside a Brooklyn courthouse in 2013 after a 10-year battle with a Title VII discrimination lawsuit against New York City and the FDNY. (Michel Friang)
--

It’s been nearly three years since a federal judge in Brooklyn handed down a landmark legal victory to a group of black New York City firefighters who argued -- in one of the most divisive civil rights lawsuits in the history of Gotham -- that the Fire Department of New York unfairly weeded out African-Americans and Latinos in its hiring practices.

The controversial culmination in favor of the Vulcan Society, the association of black firefighters, was 10 years in the making and capped decades of  legal backbiting and wrangling.  The litigation deeply angered Mayor Michael Bloomberg's administration, wound up costing the taxpayers upwards of $98 million and – among some outraged members of the Bravest – kicked off a whisper campaign that public safety would now be at risk, since the FDNY was forced to accept allegedly unqualified minority candidates in the name of diversity.

Now, in 2015, some of the smoke has cleared – and the profile of a new Fire Department has started to emerge.  For the first time in its 150-year history, FDNY hiring has begun to reflect the diversity of the city it serves – and in just a few short years, the agency has doubled the number of its black Bravest.

The gains forced on the FDNY by the Vulcans haven’t been limited just to blacks, either. Latino numbers jumped from 500 to a current high of 900 -- and the increase in women is the most astounding of all. Currently, there are 46 – a new record for women in the all-male Bravest.  There are four more women enrolled right now in the Fire Department’s probationary academy. If they make it through the grueling four months of training, the FDNY will have 50 women on the job at one time – a milestone that hasn’t been in reach since 41 women first sued the FDNY for gender discrimination more than 30 years ago.

These changes – small though they may be -- are seismic in the hidebound world of the FDNY. Even more notable is the fact that they’ve been achieved with far less rank-and-file rancor than expected under the new leadership imposed by Mayor Bill de Blasio. There are still some who argue that giving a written, SAT-style test to hire firefighters – a job known for being mostly physical – is a ridiculous system, just as there are those who argue that changing the written test in any way means it’s being “dumbed down” to accommodate minorities. Neither of those arguments alters the city’s responsibility to develop and administer professional exams– a duty it was shamefully derelict on for many decades.

It’s impossible to praise the FDNY for the gains it has made without noting that the department had to be hauled forward, feet to the flames, for even these small signs of progress. While the number of blacks, Latinos and women are better than they have been, there’s still a long way to go, especially for women. And to those who say a firefighter’s race or gender is irrelevant in an emergency: that is 100 percent correct. Most people don’t care who the first responder is coming to their aid – we’re just grateful they’re there. But, in the larger scheme of things, it does matter economically which communities and which workers enjoy access to jobs – especially high-profile, handsomely rewarded civil service positions like firefighters and cops.

When Wesley Williams, the first black firefighter hired in Manhattan, entered his all-white firehouse in Engine 55 in Little Italy on Jan 10, 1919, he did it for the $1,500 yearly paycheck – the biggest he’d ever known.  Williams was determined not to quit, even though the mostly Irish crew did its best to force him out.  He fought his brothers in the firehouse basement – bare-knuckled brawls that left the loser bleeding on the floor – and withstood the demeaning insults hurled his way, all so he could support his family.  The hazing was so intense, Williams eventually formed the Vulcan Society – pulling together the smattering of blacks who joined after him to bludgeon the FDNY into abandoning the ugly Jim Crow practices adopted by many firehouses.

Over the course of its 150-year history, the FDNY – like many tradition-loving institutions around the country – has had a rocky relationship with change. But it’s heartening to see that now, 75 years after Wesley Williams began the long battle to push the department to do more for blacks, the FDNY is finally starting to get up to speed.

Ginger Adams Otis is a staff writer for the New York Daily News and spent 10 years reporting on the FDNY’s diversity struggles. She is the author of “Firefight: The Century-Long Battle to Integrate New York’s Bravest,” published by Palgrave-Macmillan.