As Confederate flag defenders spread beyond the old Confederacy, the banner becomes a national symbol of racism 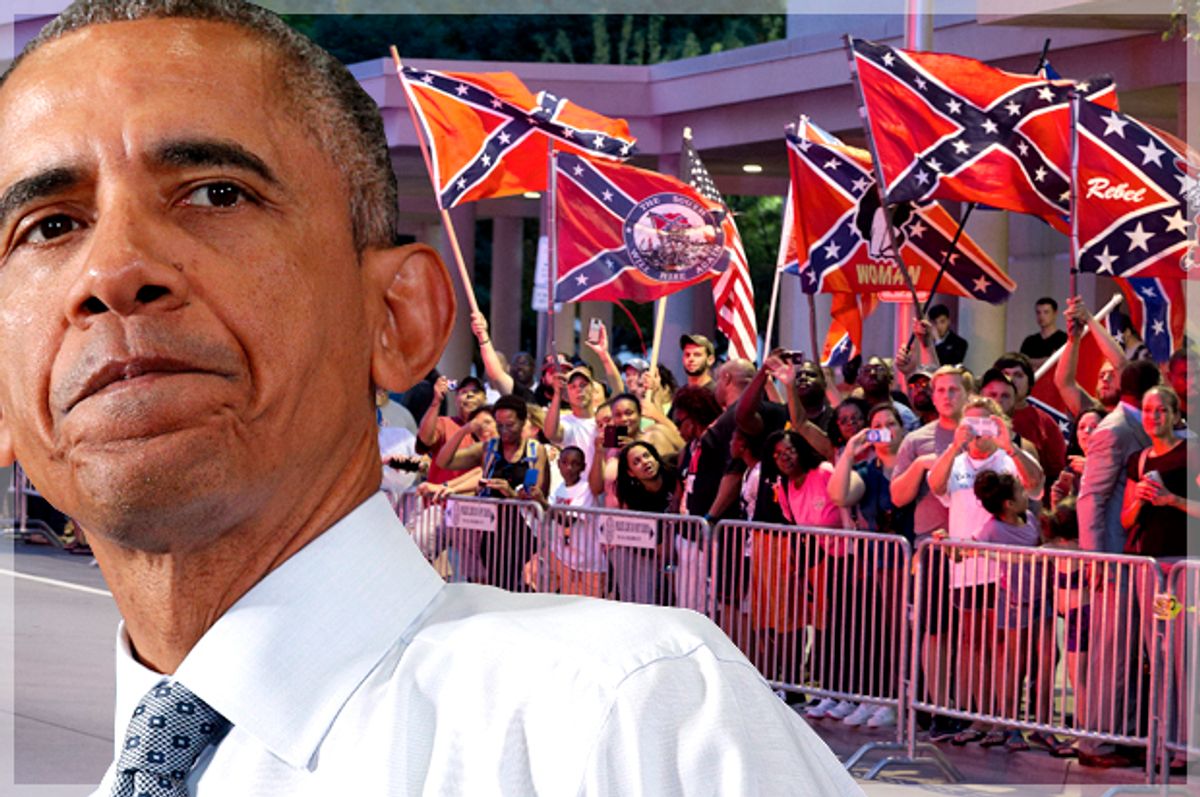 The notion that the Confederate flag is merely a symbol of Southern “heritage,” detached from slavery and Jim Crow, has always been a pernicious lie. It shouldn’t have taken the murder of the Emanuel Nine, by flag-waving white supremacist Dylann Roof, to make that the new national consensus. But it did.

Now the flag’s racist meaning is crystal clear, which is why it’s becoming an ever more beloved symbol for racist morons, even outside the old Confederacy. The ugly Confederate flag tableau that greeted President Obama in Oklahoma City Wednesday night illuminated this new reality. It follows a similar protest earlier this month, when the president visited Nashville, Tenn. Over in Durant, Okla., where the president was scheduled to speak, there was also a Confederate flag protest earlier in the day.

When I first saw reports that some jerks were planning to wave the flag along the president’s motorcade route on social media Wednesday, I admit I shrugged: Another day, another angry right-wing tantrum. It’s OK, they’re losing; let them scream and rant and wave their hate banner. But the sight of the bright flags illuminated against the dark sky, just outside of Obama’s hotel, was unexpectedly vivid and disturbing. Especially since Oklahoma was never part of the Confederacy.

It reminded me of the October 2013 rally attended by Sen. Ted Cruz and Sarah Palin, to protest the closing of national monuments during the Cruz-triggered government shutdown. That protest culminated in an angry rump group heading over to the White House and waving a Confederate flag, outside the home of the black First Family. But hey, it’s “heritage, not hate.”

I’m not sure what to do with the fact that the Oklahoma City flag protest was reportedly led by a black wingnut, Andrew Duncomb, whose Facebook page features lots of smiling, flag-loving white people. (The rest of the folks insulting Obama with the flag were white, according to local news reports.) Duncomb, who calls himself “the black rebel,” is making a career out of claiming the flag really was about “heritage, not hate.” He led a pro-flag protest through the Oklahoma City metro area on Monday, joined by 30 trucks waving the flag.

According to local news reports, Duncomb was arrested last year, with four white friends, on charges of shooting at a sheriff’s deputy. Using his Facebook identity to post in a comment thread, Duncomb suggested the news reports “stretched” the truth, but didn’t deny it.  I found no reporting on what became of the case. “Look at these people, they all followed the black guy out here,” Duncomb told local media Wednesday night. “Do you think that any of them are racists?”  It’s hard not to think of Dave Chappelle’s famous character Clayton Bigsby, the blind KKK member who doesn’t know that he’s black. They sure do love him over at Red Nation Rising.

The African Americans who showed up to support the president weren’t buying Duncomb’s claim that the flag is about “heritage, not hate,” or that it wasn’t meant as a racist insult to our first black president. A black woman wearing on Obama T-shirt broke into tears telling Politico: “He should’ve had a better welcome than he had.”

That flag is and always has been a symbol of white supremacy, a symbol of treason, and a repudiation of the multiracial democracy the Civil War helped establish. But I have to admit: the people who say the flag is about “heritage” are actually half right. It’s about heritage, all right – a heritage of hate. Increasingly it’s a symbol of our national racist heritage, which we must admit is shared by the north and the south.

But I confess I’m rattled as the flag becomes a common sight where Obama visits. What’s next: waving nooses?