John McCain snipes at Marco Rubio on immigration: The grand tradition of GOP cowardice lives on 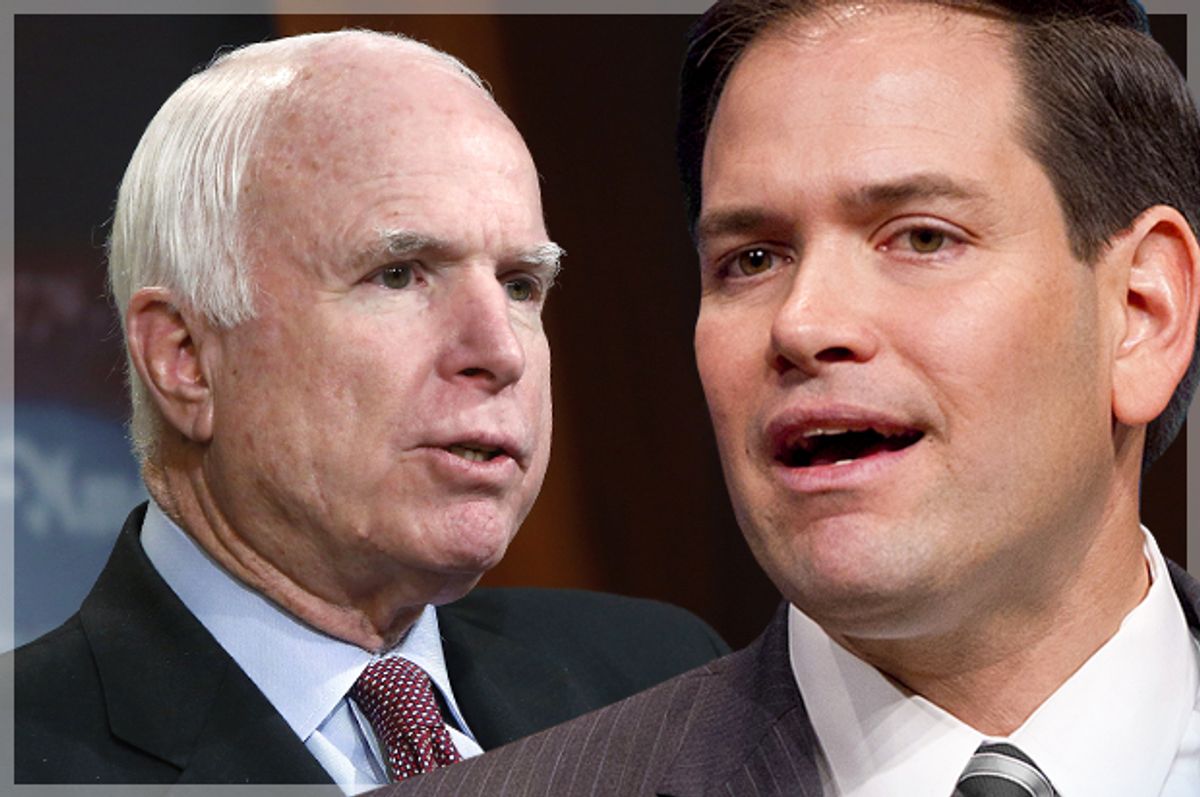 It’s fairly obvious that John McCain doesn’t really care for Marco Rubio. That's a bit strange, given that the 2008 Republican presidential nominee actually has quite a few things in common with the would-be 2016 nominee: they both think the Iraq war and surge were great ideas, for example, and they’re both extremely hawkish when it comes to foreign policy. And they’ve both at various times bucked party orthodoxy and gambled their political reputations to pass legislation on controversial issues.

But as the New Yorker’s Ryan Lizza reports, McCain clearly feels betrayed by Rubio, who was once an ally of the Arizona Republican's in one of those politically fraught legislative battles: the 2013 fight for immigration reform.

I noted that Rubio, like many other Republican politicians, has been hard to follow on the issue and no longer supports the compromise approach that the Gang of Eight took in 2013: combining a pathway to citizenship and tough new border measures in a single bill. McCain licked his finger, held it up in the air, and laughed.

“You know that old song from before you were born?” McCain said, speaking of the Bob Dylan classic, “Subterranean Homesick Blues.” “You don’t need a weatherman to know which way the wind blows.”

No burn is quite so painful as a cross-generational folk-pop burn.

Part of this animosity stems from McCain’s status as the crankiest of the Senate’s many cranky old men. He’s never been shy about razzing the rambunctious sprats of the Senate Republican caucus – Ted Cruz, Rand Paul, etc. – when they start acting out. But he does have a legitimate gripe with the junior senator from Florida: Rubio was instrumental to the Gang of Eight’s efforts to pass the Senate's 2013 comprehensive immigration reform bill, but dropped the bill like a hot rock once it became plain that it wouldn’t pass the House and was becoming a focal point for Tea Party rage. His swift abandonment of his own immigration bill was meant to mollify the conservatives whose support he’d need to run for president.

But while McCain is absolutely right about Rubio’s political cowardice and betrayal, he’s not exactly the most credible person to criticize Rubio on this point. McCain, after all, did the exact same thing when he ran for the White House seven years ago. In the years preceding the 2008 election, McCain was a vocal proponent of immigration reform, and in 2007 he sponsored legislation granting undocumented immigrants a pathway to citizenship. Then he got wrapped up in the Republican primary and discovered that he had to pander to the anti-immigrant wing of the GOP in order to shore up the nomination. At a January 2008 Republican debate, McCain was asked if he would vote for his own immigration reform legislation. “No I would not,” he said, “because we know what the situation is today. People want the borders secured first.”

And that's not McCain's only politically convenient rightward lurch on immigration. In 2010 he was facing a stiff primary challenge from J.D. Hayworth, who endlessly whacked McCain for being pro-“amnesty.” To head off the challenge, McCain endorsed Arizona’s SB1070, a draconian law that gave police the authority to detain anyone suspected of being an undocumented immigrant. And, of course, who can forget "complete the danged fence"?

This is a symptom of being a Republican in today’s political climate. Rubio and McCain abandoned their principles to appease the nativists in the party, as have Scott Walker, Chris Christie, Rand Paul, Rick Perry – the list goes on and on. It’s dangerous for a Republican with White House ambitions to say anything beyond “border security first” because it will alienate the base and leave them vulnerable to attacks from the right.

So really that’s another thing McCain and Rubio have in common: they’re both part of the longstanding Republican tradition of politically motivated cowardice on immigration reform. They should be best buddies at this point.