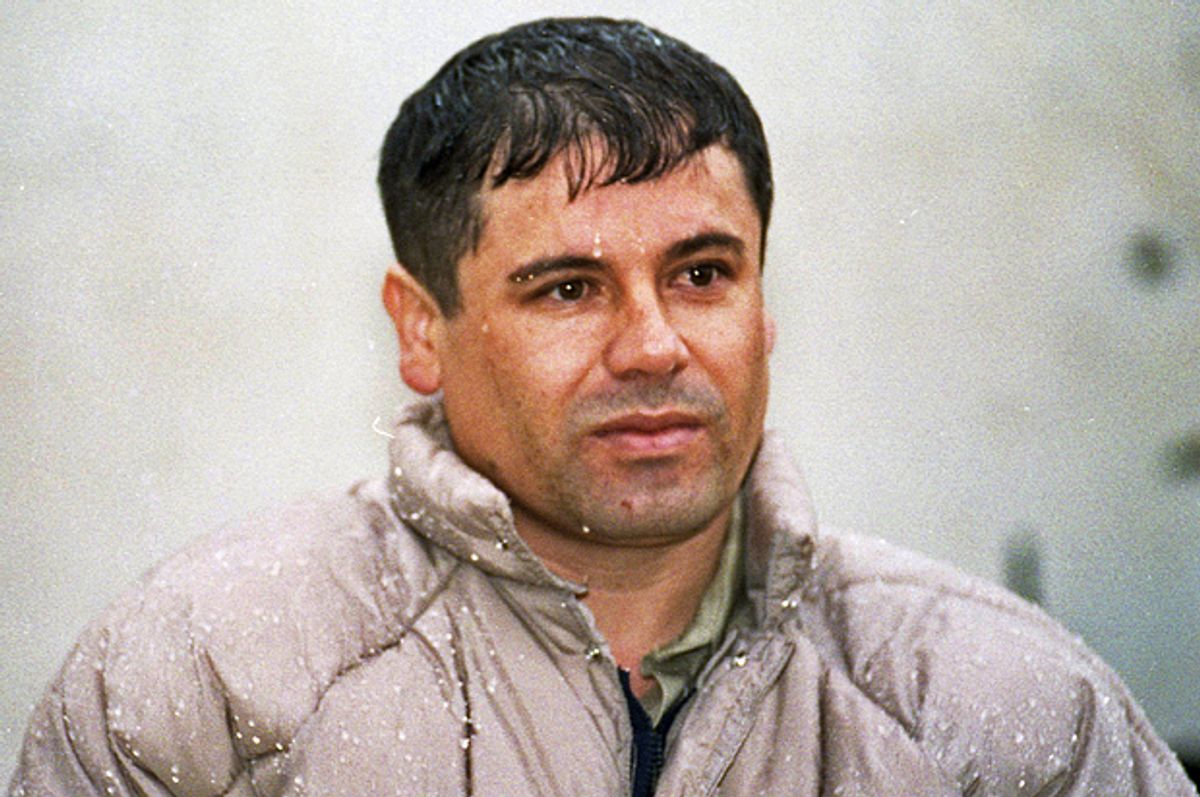 Joaquin "El Chapo" Guzman, the biggest drug kingpin the world has ever seen, vanished from a maximum security prison in Mexico last weekend and threw both Mexican and American authorities into panic. Mexican president Enrique Pena Nieto called the brazen escape, El Chapo's second, “an affront to the Mexican state” and immediately offered a massive $3.8 million bounty on the cartel chief. The U.S. government vowed to “provide any assistance that may help support his swift recapture.” Chicago renamed him “Public Enemy No. 1” after the escape. El Chapo is only the second crime boss named such by Chicago authorities, with Al Capone in 1930 being the first. El Chapo’s Sinaloa Cartel is said to employ as many as 100,000 Chicagoans among that city’s gangland, as the city, once Capone’s, is now the American hub of the largest drug operation on earth.

Donald Trump, whose unrivaled brashness has taken the Republican primary campaign by storm, showed uncharacteristic fear and called on the FBI for protection when a tweet (since deleted) from an account purportedly linked to El Chapo’s threatened the billionaire for calling him out and making racist comments about Mexican immigrants. Trump Tower we know, but no one is used to seeing Trump cower.

But the man who so worries governments and strikes fear into the heart of the leading GOP candidate is actually a hero in the hip-hop world. They’re pulling for him. He’s celebrated like a superhero of the underworld, an impossible billionaire trickster whose praises they sung while he was locked up. Seemingly immediately following his escape, songs celebrating the prison break made their way onto rap tracks. Monday saw the release of a song called “El Chapo,” featuring superstar Future, leading go-to rap blog Nah Right’s Eskay to speculate that the song was somehow cut on Sunday. While that is incredibly unlikely, Eskay suggested, more songs followed “El Chapo,” with Quavo and Offset of popular Atlanta group Migos joining Shy Glizzy on “Head Huncho,” whose artwork featured the crime boss. Just hours later, rapper Westside Gunn released “Welcome Home Chapo.”

“It’s fair to say that with his recent escape from a Mexican maximum security prison, El Chapo has cemented his iconic status amongst the trap boys,” Eskay wrote. The “trap” is an originally Atlantan term for the place where drugs are sold, and trap music, a rap sub-genre emerging out of that city, has shot to popularity in recent years. It is, in many ways, like the Mexican narcocorridos, which similarly heroize figures in narco-trafficking. Eskay continued: “Expect to see an endless stream of homages and dedications to the Sinaloa Cartel boss over the next couple of weeks.”

El Chapo was already a hero before the unprecedented and almost unbelievable escape. Popular (and himself prison-prone) Atlanta rapper Gucci Mane’s 2012 “El Chapo” begins with the hook, “All we wanna be is El Chapo / At least all the street n****s I know.” Tony Yayo, who rose to fame as a member of 50 Cent’s G-Unit, is prepping his mixtape “El Chapo 3” for release, the third in a series named in homage to the cartel chief. Platinum-selling rapper Wiz Khalifa joined Berner in 2014 on “Chapo.”

It should be noted that the lyrical celebrations of Chapo neglect the full magnitude of human misery and horrific violence for which Chapo is responsible; rather, it is El Chapo’s power, wealth and trickster wiles that are extolled. It shares that sort of glaring omission with how Americans tend to celebrate our outlaw heroes, both urban (Capone and other gangsters) during Prohibition, and Western (Billy the Kid, Jesse James, et al) during imperialist Westward expansion. The latest round of homage to Chapo focuses not on his violence but on his unbelievable escape from the federales.

That escape will go down as one of the greatest: A mile-long tunnel complete with an elevator, electricity, air conditioning, telephones and a motorcycle rigged onto a track to expedite passage. The escape captured the imagination of a genre which so often describes the vast American carceral state and the inescapability of its clutches, and outlets like The Source, Complex and World Star Hip Hop ran the story of the escape alongside their typical rap fare.

But it was Chapo’s alleged threat against Donald Trump that solidified the kingpin’s place in the pantheon of outlaws. Philly rapper (and Nicki Minaj beau) Meek Mill, whose new album recently topped Billboard for the second week in a row, tweeted delight at the conservative real estate mogul being shook at the threat. It was retweeted an astounding 40,000 times. "Scared Trump" memes coursed their way through hip-hop Twitter. 50 Cent’s website ran the story as well, along with Complex, World Star and other hip hop outlets who broke from standard reporting to include the story.

There is of course a racial component of the Chapo-Trump beef. Trump has been roundly criticized in recent weeks for what many see as racist comments about Mexican immigrants. Trump’s rising poll numbers are seen by some to coincide with his willingness to resort to racism, and he now leads in Republican candidates in surveys of GOP voters.

The alleged El Chapo tweet threatening Trump referred to him as “whitey,” compounding the racial dimension. El Chapo has the power to call out racism with not only impunity but with the power to spook a billionaire white man currently most popular with Republican voters. It was a person of color talking down to a white man of power, which compounds the trickster element of the El Chapo lore. Drug War-era state carceral power is but an inconvenience and he terrifies the likes of Donald Trump for his racism in the span of a mere 140 characters. Is it any wonder he’s a folk hero?