Rachel Dolezal jumps back in the spotlight, at the expense of #BlackLivesMatter 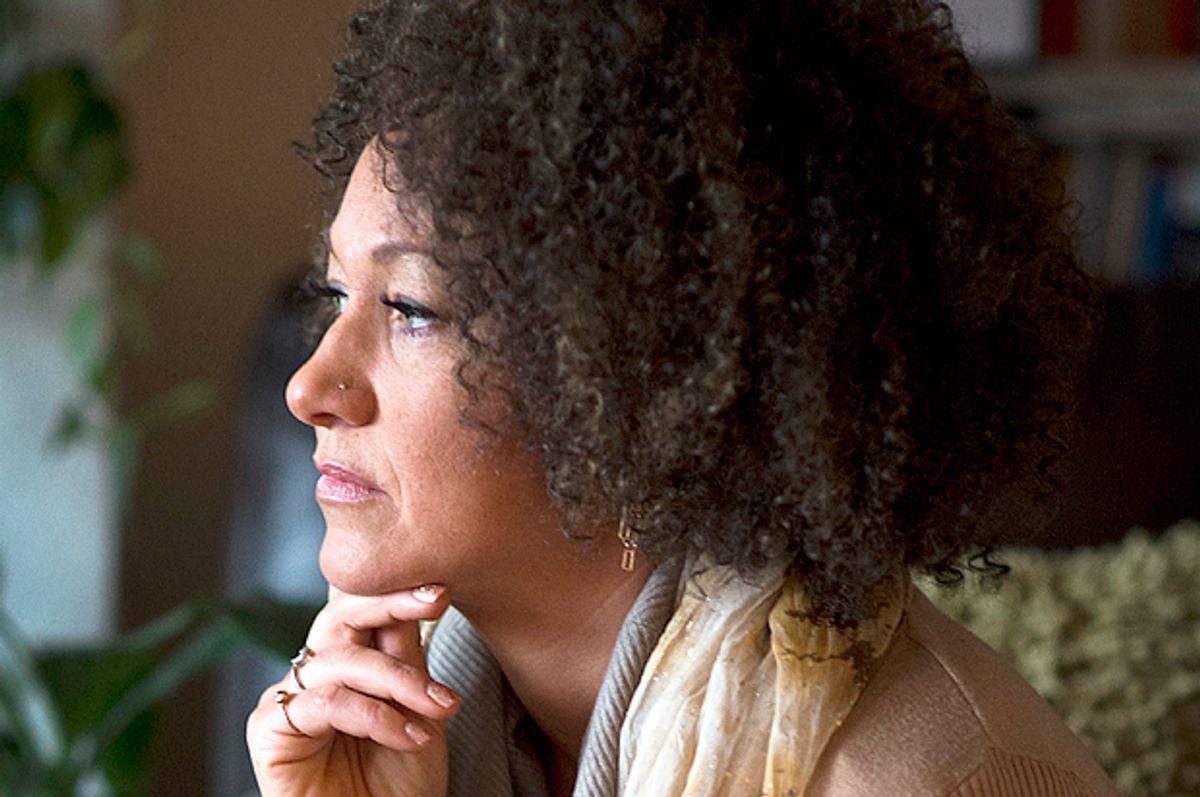 When Rachel Dolezal, the former head of the Spokane NAACP whose claims to be black were exposed by her decidedly white parents, finally released a statement offering up her resignation on the organization’s Facebook page in mid-June, her words were cagy and defensive, but did manage to highlight some of the most important racial justice issues in this country. “Many issues face us now that drive at the theme of urgency. Police brutality, biased curriculum in schools, economic disenfranchisement, health inequities, and a lack of pro-justice political representation are among the concerns at the forefront of the current administration of the Spokane NAACP. And yet, the dialogue has unexpectedly shifted internationally to my personal identity in the context of defining race and ethnicity,” Dolezal wrote. “Please know I will never stop fighting for human rights and will do everything in my power to help and assist, whether it means stepping up or stepping down, because this is not about me. It's about justice.”

Yet in the Vanity Fair profile posted on their website last night, the only person bringing up specific issues like the church shooting in Charleston that left nine black people dead was author Allison Samuels. In the wake of the horrifying deaths of Sandra Bland and Kindra Chapman in jail cells this month, and the rise of the #SayHerName movement to publicize violence against black women at the hands of police, it’s a curious and problematic omission. Dolezal the activist seems to have been replaced by a Dolezal so desperate to stay in the news she is willing to indulge a narcissistic discussion of her race-claiming thought process without contextualizing it against the daily injustices faced by black women. Even when given the chance to comment on the work the organization she headed is now doing, Dolezal brought it back to her. “I’m kind of just keeping a little bit of distance so that Naima can get in her flow of leadership. It’s actually hard because I think there’s a little coldness from her, which is hard to deal with for me, to feel like she doesn’t trust me as much now or something,” she said, referring to Naima Quarles-Burnley, the Spokane NAACP’s new president.

The interest in Dolezal’s deception rightly waned in the wake of the Charleston shooting, seeming almost quaint in light of the pressing issue of violence against black churches. So to see her resurface in a way that lacks any hint of apology, let alone mention of the specific issues she highlighted in her note, is disturbing. Instead, we hear about why Dolezal felt (and feels) justified in identifying as black, as well as the current financial straits she faces after losing her job (though she is making ends meet by doing black women’s hair).

She says she wants a book deal—a prospect that’s been deemed “unlikely” by several publishing insiders—not for the money, but because “I would like to write a book just so that I can send [it to] everybody there as opposed to having to continue explaining. After that comes out, then I’ll feel a little bit more free to reveal my life in the racial social-justice movement. I’m looking for the quickest way back to that, but I don’t feel like I am probably going to be able to re-enter that work with the type of leadership required to make change if I don’t have something like a published explanation.” To some degree, Dolezal is right: she has become the story, and there’s no way, if she is going to speak to the media, she can avoid discussing her own history. But now, rather than sounding disappointed about being in the spotlight, she seems to be clinging to it as a lifeline.

Dolezal told Vanity Fair, when asked whether her dishonesty may have hurt the Spokane NAACP’s efforts to effect social change, “Everything I do is connected to other people, so I don’t know how to assess the damage other than within my own mind. I know what I was working on and different people and systems that I was engaged with, but I mean, I hope that people are jumping in and picking up the slack.”

Reactions to the interview ranged from calling Vanity Fair to task for not profiling more black women instead of one who simply pretended to be, to decrying its lack of depth. “So Rachel Dolezal can get interviews in Vanity Fair but mainstream media still needs to be reminded that black women exist. Ohhh. OK,” wrote public relations specialist Ronke Lawal on Twitter. “Instead of redirecting focus on anti-racist issues, including state violence against black woman, ‪#RachelDolezal is still taking up space,” Tweeted Daily Dot deputy opinion editor Derrick Clifton.

“Rachel Dolezal is really trying to extend those 15 minutes, huh? Anyone ask her about Sandra Bland, yet?” Tweeted freelance writer Morgan Jerkins. Jerkins, who wrote about Dolezal for Quartz when the story first broke, argued in her essay that it was Dolezal’s lying, not her intention to create social change, that was her biggest flaw. “A white president of the Spokane NAACP chapter could have been an example of proud, interracial cooperation and mutual respect,” wrote Jerkins.

Asked about the Vanity Fair interview, Jerkins told Salon she was disappointed with the tone of the piece. “First, Dolezal said how she needed to negotiate how she identified, and there is no negotiating for those who are black,” said Jerkins via email. “Minorities are not afforded fluidity with racial identity. You cannot buy or force yourself into a heritage. She should have been asked about the black women who are dying in police custody right at this moment. What are her thoughts about Charleston, since she's so conscious? Instead she centered herself and this profile seems like nothing more than a money grab for her, a way to extend her fame. I don't mind Vanity Fair covering her because a story is a story but she made herself look worse. Maybe that was the point? Evidently, she has no interest in serving the community that she claims to be a part of.”

Feminista Jones, a social worker and New York-based feminist writer who created the #YouOKSis Twitter hashtag to spotlight street harassment of black women, told Salon via email, “I'm not at all surprised that a publication would be more interested in giving platform to a woman who continues to be a living mockery of Black womanhood as Black women are being killed by police or while in police custody. Black women's humanity is often ignored or completely disregarded so when we die, it barely registers on mainstream radars. Some publications are more into spectacles and hyperbole than being actual change agents that are supportive of moments to preserve Black lives. Dolezal offers the opportunity to talk about Blackness without actually talking to Black people which, unfortunately, is the only way some people can even engage is racial discourse.”

Dolezal, of course, did not have to talk to Vanity Fair, though given the way international prominence of her story, that she previously made the round of TV news shows like "Today" and "Melissa Harris-Perry" and her pursuit of a book deal, it makes sense that she would choose to do so. But she could certainly could have found ways to discuss topics that extend beyond her own highly subjective experience, or at the very least, tried to. She could have echoed the passion of her resignation statement and pointed white readers who may by sympathetic to her story to work they can do to combat racism. Dolezal did not have to indulge the obsessive focus on her personal drama, but might have used this opportunity to broaden the discussion, to show that she recognized why people were angry with the disproportionate attention she has gotten, or shared why she was inspired to get involved with the NAACP in the first place.

Yet Dolezal seems to continue to work under the assumption that unless she is able to discuss issues about race as a black woman, she cannot comment on them, even as they dominate the news. Witness her claim, as reported by Vanity Fair, to have received a traffic ticket where an office marked her race as “black.” This detail reads as particularly glib, given that Sandra Bland’s jail cell death was preceded by her arrest for failing to signal when changing lanes while driving, one that the Texas Department of Public Safety has admitted violated their own procedures.

Nowhere in her interview does Dolezal mention the word “privilege.” Perhaps she truly is willfully, stubbornly, myopically not aware of the vast privilege she possesses, and has possessed from birth, as a white person. Instead of acknowledging on any level that she does not, in fact, have to worry about having her face slammed into the ground by police, as Bland’s was, she goes back to playing the victim, as if she is somehow entitled to sympathy. Even if she had acknowledged her privilege, that wouldn’t mean the world needed to hear more from her right now, but it would have pointed to her having a semblance of humility.

Samuels writes that Dolezal “commands an impressive knowledge of African American literature, its writers, and the history of the Civil Rights movement.” It’s a shame then that Dolezal can’t step back and see how the persona she built and the attendant hype around it has usurped important discussions we should be having, ones about the topic she seemed to care so much about just a month ago—justice. By making it all about her, Dolezal has dug an even deeper hole for herself; now it’s time to leave her there.