Editor fires back at racist complaints: "Championing of diversity does not extend to bigots" 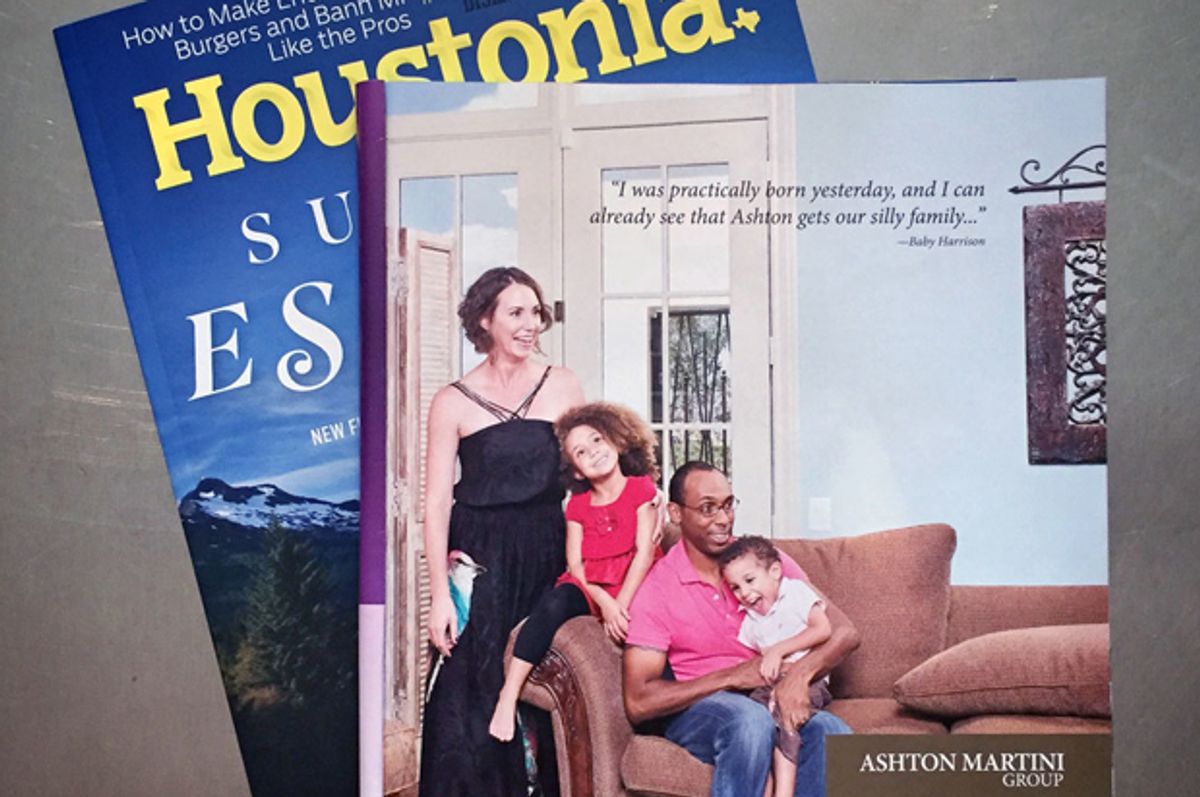 The greatest lie in the history of business is that the customer is always right. If you've ever held a job that involved customers, you know this. But the fear of alienating them is so great, the mantra of "always right" is so embedded as a perfectly reasonable justification for unreasonable demands, it's hard sometimes to come out and say, you can take your business somewhere else. So a hearty well done this week to Houstonia editor-in-chief Scott Vogel, for his recent announcement regarding a class of readers who "Need Not Apply."

In a letter so beautiful I want to start a fan club for it, Vogel says that the staff recently heard about a doctor in Tomball whose waiting room often carries the publication. But, as he says, the last issue did not grace the good doctor's reception area, apparently because of "something he saw on the very first page of our June issue, in an advertisement by the Ashton Martini Group, a residential real estate agency." It was a happy, relaxed photograph of a local family — and their three beautiful children. The quote on it is a fancifully imagined one from the baby, who smiles from the rug. "I was practically born yesterday, and I can already see that Ashton gets our silly family…" What could it have been about the full page spread that would cause the doctor to email Ashton Martini about its "Disgusting Ad" and announce, "Your ad in the June Houstonia magazine is DISGUSTING! I will not put this magazine in my reception area! If you care to discuss this, I am available"? The parents, I should mention, are a man and a woman, so you can rule out the "traditional marriage" fear.

Have you zeroed in on it yet? I'll give you a hint — it has something in common with a Cheerios ad that was so controversial it incited an outbreak of what Michael Burgi of Adweek described as "bile of the darkest order." That's right — the family is biracial. Gosh, must be hard for the doctor every time a magazine with Kim and Kanye's family hits the waiting room.

We can't fully confirm that the racial makeup of the family is what caused the doctor's fury — because as Vogel explains, "As it happens, we did care to discuss this with Dr. Tomball, who oddly was not available when we attempted to make contact." It's possible he didn't care for the cushion placement on the couch. But a few days later, the magazine then received a call from another reader who identified himself only as Fred, who said he "just can’t go for racial mixing" and feared children might see the ad and "get it into their heads that this is okay." He wanted to alert the editors that he'd taken the June issue directly from his mailbox to the trash — even as he said he didn't want to cancel his subscription and that he's still "a fan" of the publication.

And here's where Vogel gets going. "Well, we are not fans of him," he writes. "Indeed, if Fred ever finds the courage to call and give us his full name, we will remove him from our subscription rolls immediately. I'm not sure if Dr. Tomball is a fan of this publication or not. I do know that if so, he will have to go get it himself, as we will no longer be sending copies to his office. Houstonia's championing of diversity does not extend to bigots, and while we are by definition dedicated to discovering the best things about this city, we’ll never ignore the worst."

You can argue that it's not the job of a magazine to withhold its services to people who have hatefully limited world views. You can say that Vogel is making a capricious choice in telling readers who don't like an ad featuring an interracial family he doesn't want them as subscribers, like the commenter who complained, "What I DO find offensive is intolerance for dissenting points of view, as if everyone is going to fall in lockstep with your unconventional redefining of said 'norm.'"

And while you do that, I'll be over here applauding Vogel and company. It takes a lot to make an editor turn down a subscriber flat, to say, "Deal with it, circulation department!" The editors could easily have quietly received their responses from unhappy readers and countered with a simple, "Thanks for your feedback." Instead, they chose to use the complaints as an opportunity to say something. You take the time to contact an advertiser or an editor to say you don't like the content? Then please allow the content creators to take the time to say, "Buh bye." It's an act that says, we want to be on the side of the living in the 21st century, that love and family are not "disgusting" but are, in fact, "the norm." So get used to it, or leave your waiting room bare.