Obama gives Iran hawks the smackdown they so richly deserve: They bungled Iraq, and they've learned nothing 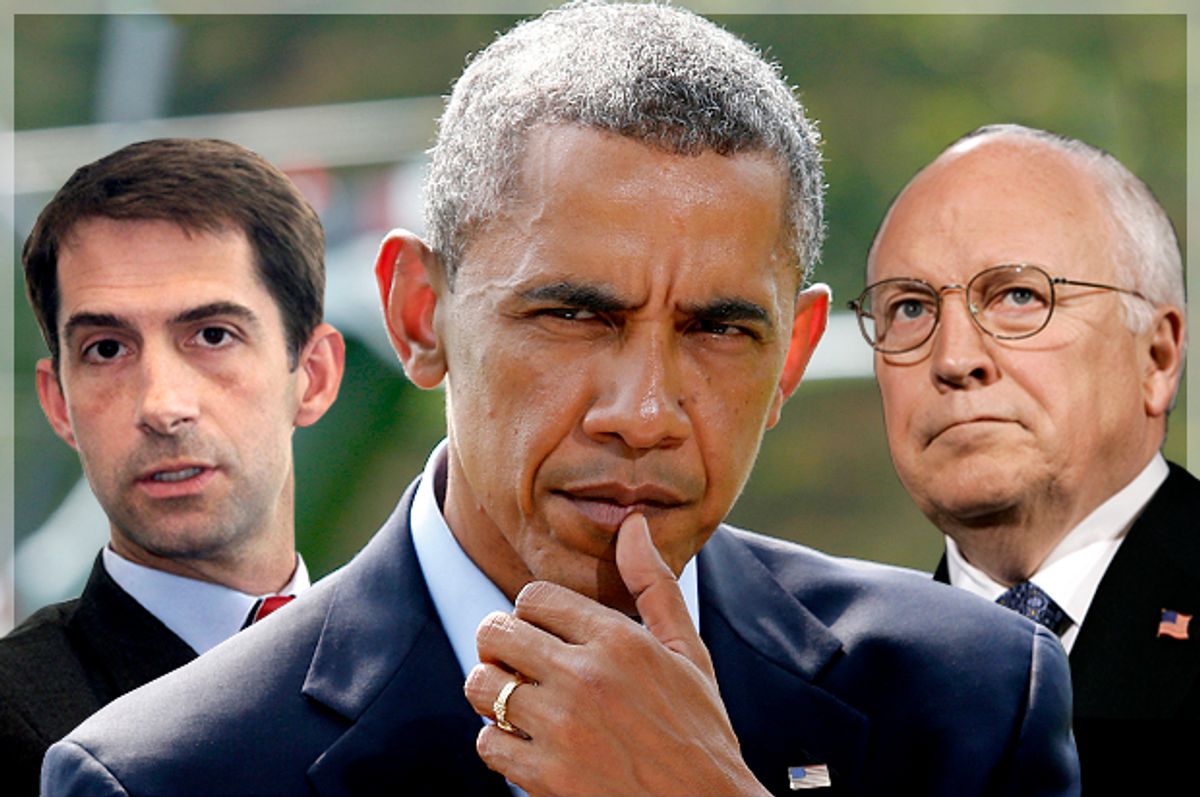 President Obama has not exactly been patient with Congress when it comes to the multilateral diplomatic framework with Iran over its nuclear ambitions. After the agreement was announced last week, Obama called a press conference and used the event to methodically rip apart each argument critics have deployed against the deal. Time and again he challenged Republicans, conservatives and hand-wringing Democrats to put up or shut up: to lay out their alternative plans for keeping Iran from going nuclear. He promised to veto any measures the Republican-controlled Congress might send to him blocking the easing of sanctions on Iran. He wasn’t making a sales pitch; he was defying Congress to get in the way of potentially one of the most important diplomatic breakthroughs since the end of the Cold War.

Of course, by using pointy words and a confrontational tone of voice, Obama upset some members of the press who seem to think that bipartisan consensus may still be achieved when it comes to Iran and nuclear weapons:

Ah yes, if there’s one thing Republicans in Congress have made their hallmark during the Obama years, it’s the “fair hearing.” We’ve already seen 47 members of the Senate Republican caucus attempt to preemptively sabotage the deal with a provocative letter to the government of Iran. Many of those senators are also running for president, and they’re trying to out-hawk one another by accusing the administration of engaging in Neville Chamberlain-like appeasement. Most Senate Republicans have been taking their Iran cues from Tom Cotton, who is already planning bombing runs against Iranian nuclear facilities. Sen. Mark Kirk, Republican of Illinois, said “this agreement condemns the next generation to cleaning up a nuclear war in the Persian Gulf.” He does not represent a minority viewpoint. Who exactly is going to give the “fair hearing” in this situation?

The reason Obama’s not banging his head against the wall and trying to get Congress to approve the deal is that he’s fairly confident Congress can’t actually do anything to stop it. The 60-day period for congressional review has already begun, and as the New York Times noted, “the numbers suggest Mr. Obama will prevail; if Congress rejects the Iran accord, he promised on Tuesday to veto the legislation, and he has enough Democrats to win that contest.” Instead of getting Congress on his side, Obama’s working to convince the public that the Iran deal is the right course of action, and that his critics are wrong.

To make that case, he’s deploying a simple and effective argument. “The same politicians and pundits that are so quick to reject the possibility of a diplomatic solution to Iran's nuclear program are the same folks who were so quick to go to war in Iraq and said it would only take a few months,” Obama said yesterday at the Veterans of Foreign Wars national convention.

He’s absolutely correct. Conservatives who backed the Iraq War and also complain that the nuclear deal does nothing to curb Iranian meddling in the Middle East don’t really have too much credibility on this score. Nothing has done more to bolster Iran’s influence across the region than the 2003 invasion of Iraq. Before the war, the hawks theorized that a swift and decisive war against Saddam Hussein would either scare the Iranians into better behavior or spark an internal uprising that would topple the regime. Instead, we eliminated one of Iran’s regional counterweights and in its place we set up a chaotic power vacuum that Iran filled with money, political influence, and weapons. Put simply, if you backed the neocon adventure in the Middle East, you don’t get to claim expertise when it comes to reining Iranian influence.

And when you look at some of the more prominent critics of the Iran deal – particularly those running for the Republican presidential nomination – you see a lot of people who still argue that the Iraq war and justified and a terrific idea overall. For most of them, the preferred alternative to diplomacy with Iran is “crippling” sanctions, bellicose posturing, and the “credible threat” of military action – a policy smorgasbord that hasn’t succeeded in curbing Iran’s nuclear ambitions and will almost certainly lead to war. A good number of hawks, represented John Bolton, want to start bombing Iran yesterday.

The lesson of the Iraq War is, as Conor Friedersdorf wrote earlier this year, that “Americans vastly overestimate their ability to develop grand strategies and to predict how foreign interventions of choice will play out over time.” Obama is completely justified in pointing out that his most prominent critics have stubbornly refused to learn this lesson. And the president’s cause is better served by reminding the public of their failure than by trying to convince some incorrigible warmongers that diplomacy should be given a chance.