GOP's Trump smackdown contest: Why it's all about picking the biggest possible fight with The Donald

Ignoring Trump won't make him go away. Going after him is just the spark some candidates need 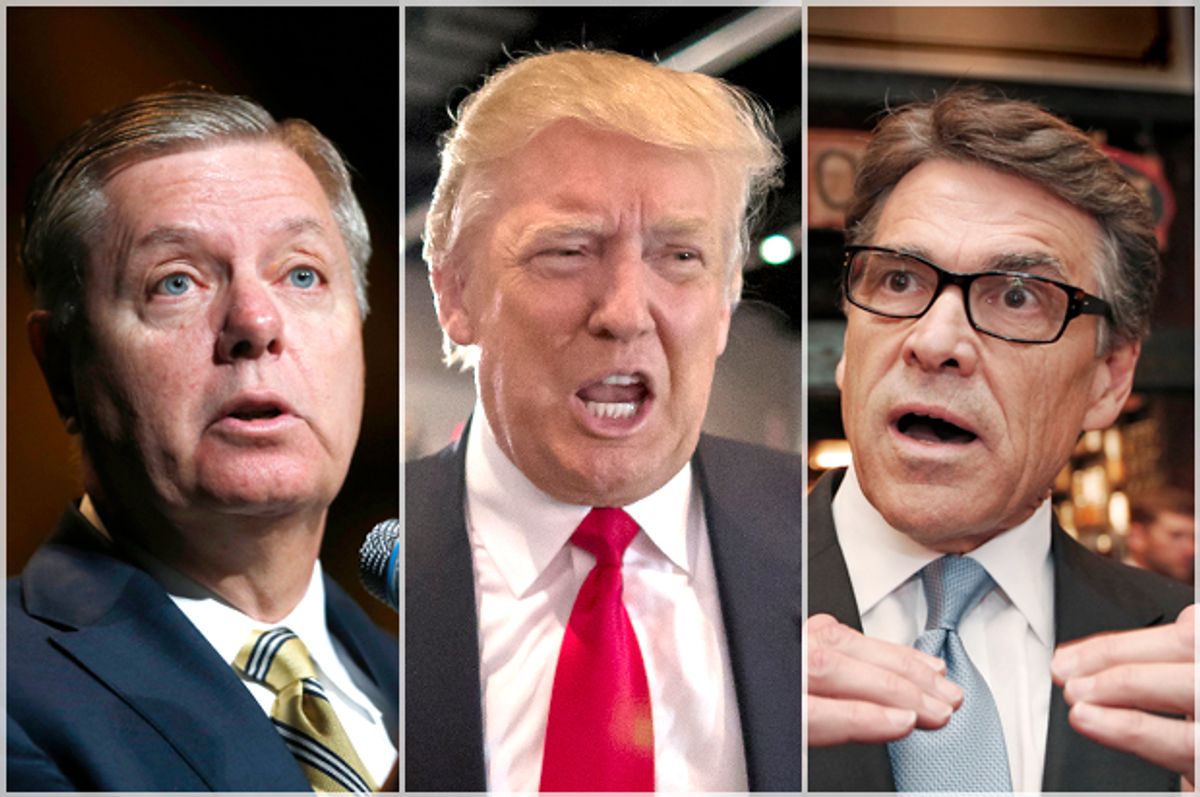 Even garbage fires like this Donald J. Trump situation the Republicans have going for themselves have a way of working themselves out through the magical conservative means of the free speech marketplace.

Trump has cornered the market on media coverage by nature of his constantly newsworthy (/funny) antics and their corresponding resonance with one-quarter of Republican voters. This has led some to complain that the media needs to stop covering Donald Trump. That's not in our interest because both writing and reading about Donald Trump's presidential campaign is fun. If none of the other Republican candidates are as fun to write or read about as Donald Trump then they should pull themselves up by their bootstraps and set to increasing their funnin' levels. The problem is squarely Bobby Jindal's problem, for example, if no one cares about Bobby Jindal.

Donald Trump is a problem that will not go away by ignoring it. He is a clogged toilet in need of a plunger. And one of the interesting sub-contests going on now within the Republican Party is the competition among lesser candidates to become chief plunger.

The Perry campaign's strategy is to position their man as Trump's foil, the one to whom debate moderators will turn when they're looking for some golden prime-time slap-face action. Simon Maloy has chronicled Perry's persistent strategy of trying to pick a direct fight with Trump, something that Perry questionably and self-aggrandizingly frames as battle for protecting conservatism's noble reputation.

Not content with the smattering of Twitter insults Trump's thrown his way in return, Perry dedicated an entire speech yesterday to "Defending Conservatism Against the Cancer of Trump-ism." (The event at which Perry delivered his lengthy castigation of television's Donald Trump was "the Opportunity and Freedom PAC forum." How was Perry able to snag such a prime speaking invite to this D.C. policy forum? Perhaps because the Opportunity and Freedom PAC is Rick Perry's super PAC. But that's a campaign finance story.)

Shit-talking Donald Trump is always welcome in these parts, though Perry's self-conscious stab at statesmanship lends a biblically overwritten element to the speech. (A couple of examples: "My fellow Republicans, beware of false prophets. Do not let itching ears be tickled by messengers who appeal to anger, division and resentment." "The sower of discord foments agitation, thrives on division, scapegoats certain elements of society, and offers empty platitudes and promises." He later reveals Donald Trump to be the Sower he was referring to the whole time!) The speech describes Trump as "a cancer on conservatism" and "the modern-day incarnation of the know-nothing movement," and "Trumpism" itself as "empty calories."

The address had the intended effect of getting reporters and pundits to say all sorts of nice things about Rick Perry (This is William F. Buckley renouncing the Birchers, etc.) and maybe it will earn him a bump in the polls, more donations, and pole position among the anti-Trumps heading into the first debate. Smart!

Lindsey Graham wants some of that action, too. Contrary to popular convention, Donald Trump repeatedly reading aloud Graham's cellphone number to a roomful of reporters was the best thing that's happened to Graham's campaign in some time. Maybe he got a bunch of annoying phone calls while he was trying to watch "Minions" with Kelly Ayotte and her kids, but no bother. Graham had called Trump a "jackass" and Trump engaged with him in the most classy, very bigly classy way imaginable. Graham ran with it. He even got the conservative IJ Review site to make this campaign video for him at no cost! It went viral and played over and over on cable news. This sort of exposure can't hurt when Trump's voters were never in play for Graham, and more important, when his national polling average rests at 0.0 percent.

Trump's problem is the Republican Party's problem. You can't blame the media for covering the hilarious end-times waste product of the GOP's six-year effort to build resistance to Barack Obama and everything that he stands for, or that they pretend he stands for. Candidates like Perry and Graham aren't whining about how Trump's getting all the attention; they're going directly after him to seize some of it back. Maybe this could be a healthy cleansing exercise for an out-party led astray by years of leaderless, chaotic rhetoric.