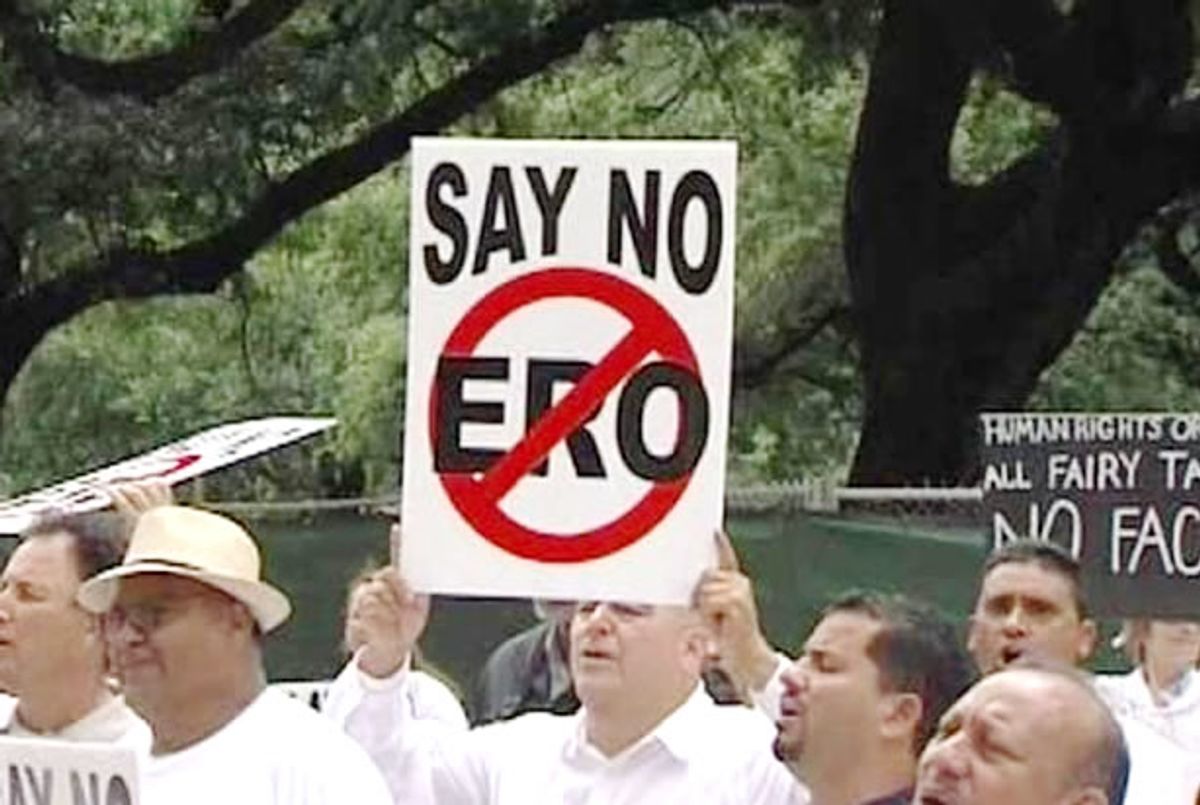 The Texas Supreme Court granted a victory to the opponents of Houston's Equal Right Ordinance (HERO) on Friday, ruling that the Houston City Council must either repeal the ordinance outright or put it on the ballot in the November elections, the Houston Chronicle's Rebecca Elliott and Mike Morris report.

In April, a lower court agreed with Mayor Annise Parker and City Attorney David Feldman's determination that many of the signatures included on a petition to recall the ordinance were either forged or otherwise invalid. The Supreme Court disagreed, arguing that as soon as City Secretary Anna Russell determined that the petitioners had collected enough signatures -- which she did before being overruled by the mayor and city attorney -- it was "the City Council's ministerial duty to reconsider and repeal the ordinance or submit it to popular vote."

HERO expanded the the city's anti-discrimination code to include protection for sexual orientation and gender identity, essentially bringing it in line with current federal standards.

But opponents of HERO -- including Dave Wilson, an anti-gay activist best known for winning his position on the Houston Community College Board of Trustees by misleading black voters about his race -- claimed, as they always do, that the ordinance will allow for sexual predators to stalk into women's facilities, teenage boys to follow girls into the bathroom in public schools, and all of the other scenarios that haven't materialized since the passage of California's transgender rights legislation.

Conservatives like former Harris County Republican Party Chief Jared Woodfill are calling this decision a victory over the tyrannical rule of the first openly gay mayor of a major American city. "This is all about [Mayor Annise Parker] and her personal agenda," he told the Chronicle.

"The actions she took were unlawful," he added, "and now the court has said the people are going to have an opportunity to vote, and that's all we've asked for from day one. I think this mayor owes an apology to the people of the city of Houston."

In addition to the referendum on HERO, the November ballot will include races for mayor and a number of city council seats, meaning that transgender rights will no doubt become a key issue in the race. Or, as Woodfill put it, "you're going to have money pouring in from all across the country on this issue because it's extremely important."

Watch a report on the Supreme Court's decision below via ABC13.