“Now that’s a Jewish face!”: They all agreed cheerfully that should the Nazis come, my sister was doomed

On this Shabbos, my mother looked at us one by one: Beautiful, yes, but would we survive the next Holocaust? 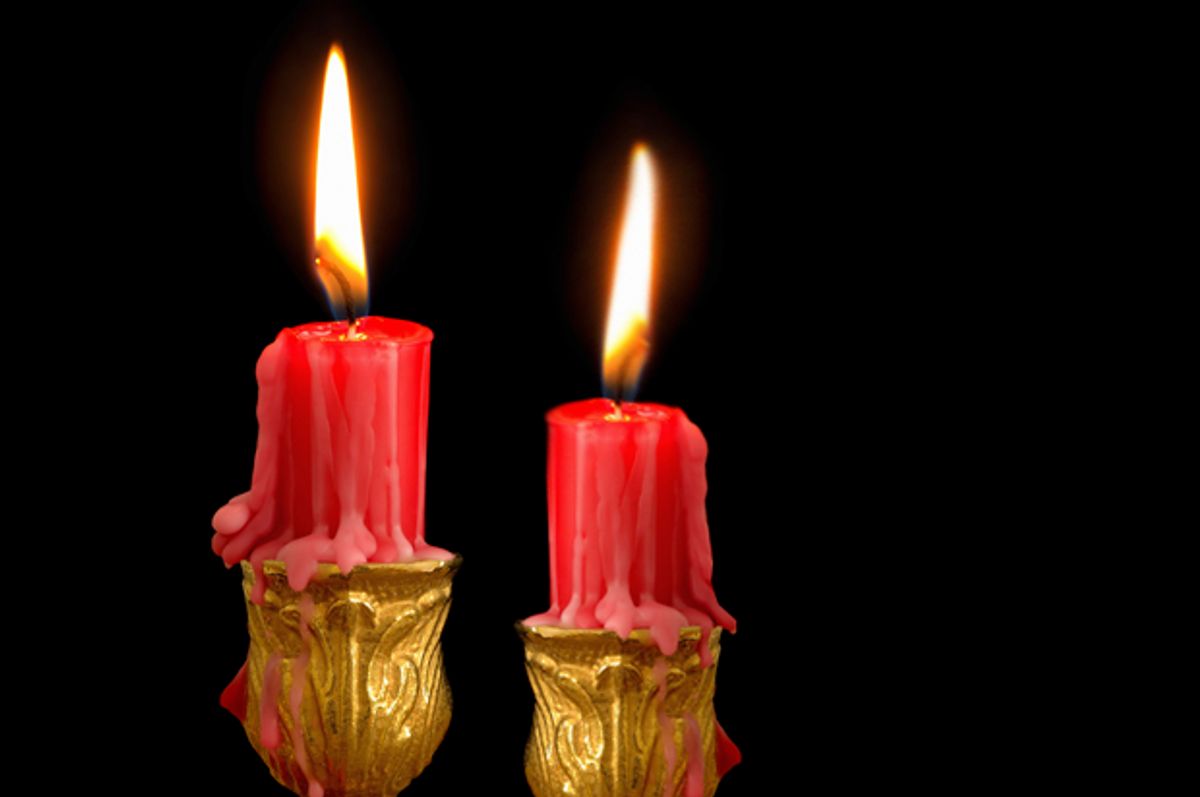 Excerpted from the book "THIS IS NOT A LOVE STORY"

It was December, the day after Chanukah. Outside, bare trees wrapped themselves in snow, their white-covered branches flailing frantically in the wind.

In the kitchen, the cleaning lady was polishing my father’s silver menorah, the one he had lit for eight nights. On the counter nearby stood Yitzy’s smaller menorah, the one he’d received at his birthday. My sisters and I also had menorahs, ones we had made in school, flatter, smaller, and more colorful, crusted with the wax of melting candles, from flames that had flickered at the frosted windows of our dining room.

The menorahs now stood patiently on the kitchen counter, waiting to be polished and cleaned. They waited to be carried back to the dining room to be carefully placed behind the glass panes of the closet, where they’d stand alongside the rest of the family silver until next year.

On Thursday evening, the last night of Chanukah, I had run upstairs to Kathy and given her a doughnut. It was a good doughnut from Weiss’s bakery, with frosting on top and custard inside. Kathy said that I was making her fat, but she ate the entire doughnut happily. I stayed with her for just a few minutes and then quickly ran back down, so I did not realize until the next evening, after my mother had already lit the Shabbos candles, that I’d left my schoolbag with my favorite Hello Kitty eraser and my homework sheet upstairs.

I looked carefully around me. Rivky was reading a book on the couch. My mother was in the kitchen talking with my great-aunt, who was visiting from Israel. Little Miri and Vrumi were playing in the basement. I walked quietly to the front door. Once out, I rushed upstairs and immediately back down, the only problem being the in-between, when I spoke with Kathy for a really long time.

I did not realize just how long a time. I only knew I was in trouble when I skipped merrily down the steps to the first floor and found Rivky waiting at the bottom, hand on hip, her patent leather shoe tapping righteously on the floor. It was one thing to visit a gentile on any school day, she said, but on the holy Shabbos?

Rivky pursed her lips. “We’re ready to eat,” she said loudly. “And I’m going to tell everyone exactly where you went.”

I stared at my sister in horror. I immediately explained that I had gone to get my school parsha sheet, the one with questions about the weekly Torah portion that I needed to review on the holy Shabbos itself.

I looked down at my empty hands. Where was the parsha sheet? Between the up and down and the in-between, I had completely forgotten it. Now I looked like a liar.

“It was a necessary sin,” I explained hastily. “It was all for the sake of Shabbos. I had to go up to Kathy for the parsha sheet but she didn’t have it because she mistakenly threw it out with my Hello Kitty eraser. So it isn’t my fault, ’cause she was looking for it and I was helping her, ’cause I didn’t want to leave a holy parsha sheet with a gentile. That’d be terrible for the honor of Shabbos. And anyway, I need to be friends with Kathy. She’s gonna save me when a new Holocaust comes.”

Rivky looked at me without speaking. I could see in her eyes that she thought I was making it all up.

I stuck out my tongue. She spun around and marched toward the dining room. I ran after her.

I did not like my great-aunt Frieda. She was old and small and gave terribly wet kisses. But Aunt Frieda was the wife of Mordcha’, my grandmother’s only surviving brother, so I had no choice but to treat her nicely. She had come to America for a two-week visit, and my mother had warmly invited her for the Shabbos dinner.

Aunt Frieda loved my mother, her youngest and favorite niece.

“Esther!” she had exclaimed happily when my mother opened the door before Shabbos. “Look at you! As pretty as the day you finally became a bride!”

I stood the farthest away, but she came at me first. She held my cheeks in her hands and squeezed. She kissed me four times, twice on the right, then on the left, her stiff, curly wig scratching my skin. She patted my face, pinched my chin, and said, “What a beautiful girl! What a beautiful girl!” I wiped my face on my sleeve.

She pointed at Rivky.

“Look at that face,” she announced cheerfully. “Now that’s a Jewish face!” She waved her hand emphatically. “Eh! She would never survive the Holocaust.”

She stroked Rivky’s arm to reassure her.

My mother smiled lovingly. She thought we were beautiful too, not that it mattered. Beauty was a superficial thing for the goyish world. Here, for us, there were only two kinds of faces that mattered: those that would survive the Holocaust, and those that would not. My mother, sitting across the Shabbos table, studied us one by one. She agreed that Rivky would never have made it through the war. She was all dark hair and large Jewish eyes.

“But who knows?” my aunt said enthusiastically. “Who but the one above knows? Your own mother with her dark eyes is alive and well, and her oldest brother — he looked like an Aryan thug! He was killed. Nothing remained of him.”

They looked at Rivky again. They then agreed once more that regardless of God, should the Nazis come, Rivky was doomed.

My brother Yitzy, on the other hand, would stroll right through. He and Miri, my baby sister, were blond with blue eyes and freckles. They could easily pass for German or at least a good Polish. Why, they’d barely need a place to hide.

And as for me, well . . . I was a puzzle, a great big puzzle. My great-aunt observed me up close. My mother pursed her lips, pondering. I was not blond nor black-haired. I was not blue- nor brown-eyed. I was not particularly fair, but not very dark either. This left me in a confusing place, somewhere between Jewish and gentile, life and death, the right and left of Dr. Mengele’s long stick.

Aunt Frieda squinted and peered at me. I smiled hopefully. I turned sideways so she could see the one dimple I had on my right cheek. Because there was no way I was not surviving the Holocaust while my bratty little sister just skipped right through. Then, just as Aunt Frieda was to announce my final chance for life should a new Holocaust come, Nachum walked in. She turned abruptly.

“Nachum!” she said, clapping her hands. He looked up, startled.

I cleared my throat loudly, but they had already forgotten me. It was all very annoying. Nobody ever seemed to make up their minds whether I would or would not survive a Holocaust. Just what was I to do when the Nazis showed up?

Well, there was always Kathy, I supposed. She could hide me. I could take shelter under her coffee table until the war was over, eating lettuce, raw potatoes, and saltless crackers. But even that was uncertain. Everyone always said that one should not trust the gentiles — any gentile; that even those who seemed to be our friends would hand us over to the Nazis for only one bottle of vodka and three bags of sugar. All gentiles were nice, my teachers said, until there was a Holocaust, and then their evilness sprouted right out.

This worried me. I tried to find the evilness and where it might sprout out from every time I went to visit Kathy, but I could not find a hint of it anywhere.

Just then my aunt laughed. “Look at that smile!” she said victoriously. “Of course he’ll survive!”

I looked up. Crazy Nachum had only smiled, and already he’d survive the next great massacre?

It was the dimples. He had two of them. My aunt had put a small prize in his hand, and he had flashed a bright smile. When Nachum smiled, a dimple appeared on each cheek that even some annoying neighbor had once said was adorable.

I could not believe it. So Nachum would survive the Holocaust, while I, of uncertain classification, would be stuck in a cramped attic apartment?

I stared woefully at my gefilte fish and kicked the table. My mother never noticed. Neither did my older sister. She was piling up the first-course plates, taking them to the kitchen. My father was teasing Miri, plucking her thumb out of her mouth every time she tried sucking on it. With his other hand, he held on to Vrumi, bouncing him on his knees. And my mother, she just laughed, was already talking about something else, a dress my great-aunt had bought two sizes too small.

Then my father and older brother sang the holy Shabbos songs and my great-aunt Frieda sang along loudly. She smiled blissfully at me, her head moving to the beat, her hands waving two silver spoons in the air, as if she were conducting an orchestra. I could hear Rivky giggling helplessly in the kitchen.

I scowled, and when my mother asked me to help clear the rest of the plates, I refused.

Bossy older sister. She would never have survived the Holocaust anyway. See if I cared.

Excerpted from the book "THIS IS NOT A LOVE STORY" by Judy Brown. Copyright © 2015 by Judy Brown. Reprinted with permission from Little, Brown and Company.

Books Holocaust Judaism This Is Not A Love Story