As the New York Times backpedals, Fox gives Fiorina a platform to lie – as it shuts her out of its 2016 GOP debate 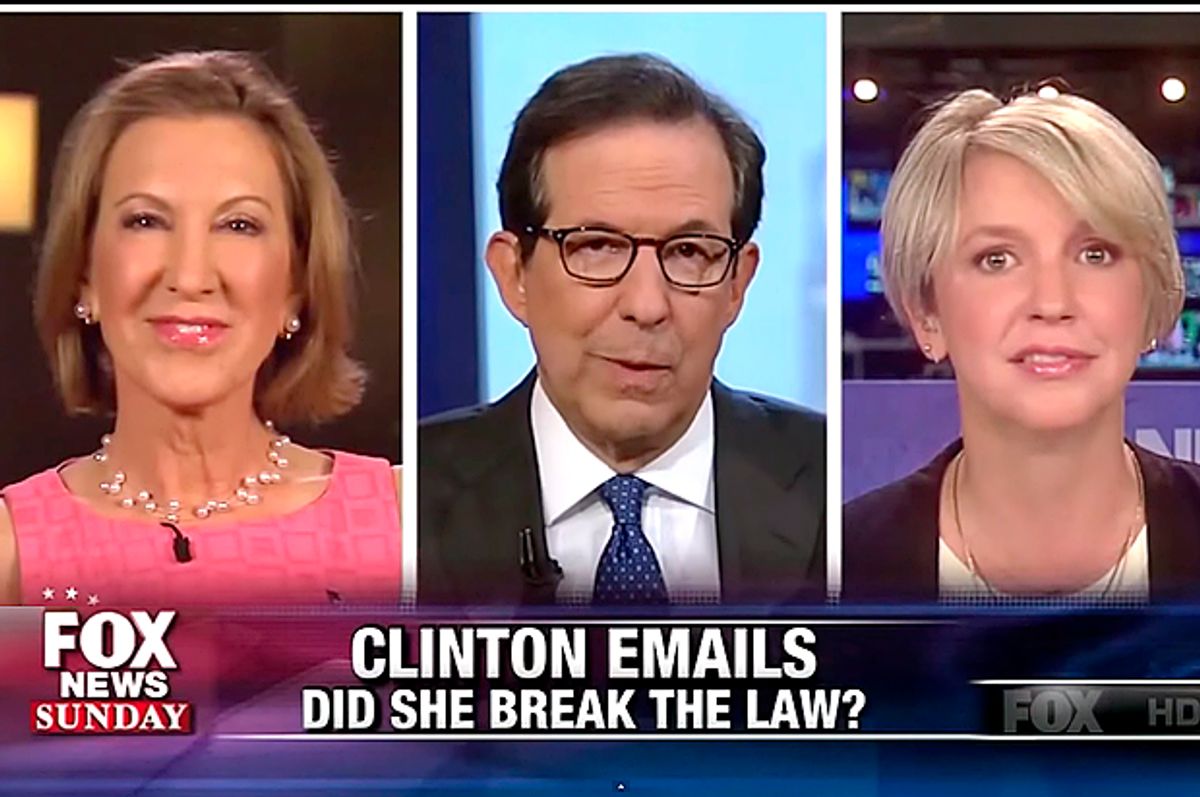 Credit where it’s due: Liberals like me often praise Fox’s Chris Wallace for being a rare voice of actual journalism at the GOP propaganda factory. So it’s important to acknowledge when Wallace acts like any other Fox shill.

That’s what he did Sunday, hyping Hillary Clinton’s alleged email troubles, as distorted by the New York Times. In case you missed it: the nation’s best newspaper embarrassed itself Thursday night with a blockbuster A1 story reporting that the Justice Department had been asked to open a criminal investigation into Clinton’s handling of certain State Department emails. In subsequent corrections and clarifications, however, the Times revealed that a) the subject of the investigation wasn’t Clinton herself and b) the requested investigation wasn’t criminal.

That didn’t stop Fox from hyping the charges for days, culminating in breathless coverage at the network’s one semi-respectable show, Fox News Sunday, helmed by Wallace, with Fiorina as its featured GOP guest. So Fox gave Fiorina its most important news platform to swing wildly at Clinton – while also demonstrating, diabolically, why she probably doesn’t belong in its upcoming GOP debate.

An Ed Henry package set up the segment. He spoke darkly of the possibility of an FBI investigation into whether Clinton stored email that was later classified on her private server. Henry made one brief stab at the truth. “In fairness to Clinton, the e-mails did not contain classification markings,” he admitted, but went on: “Republicans note the improper handling of classified information can lead to charges.” Charges, perhaps, of something, against someone -- but not of criminal behavior, and not against Clinton; the Justice Department already made that clear.

Fiorina faced Jess McIntosh, vice president of Emily’s List, who ably fended off both Wallace and Fiorina. You might be wondering why Fiorina agreed to a joint appearance with a staffer of Emily’s List, rather than another GOP contender (though it must be said McIntosh is smarter than most of the GOP field). But clearly Fiorina is desperate for exposure – and Wallace gave it to her, although it might not have turned out the way she hoped. Asked if she thought Clinton “broke the law,” Fiorina babbled: “Well, it's clear she broke the rules. It's absolutely crystal clear she broke the rules. It's crystal clear that she has been engaged in a cover-up of lots of things. Benghazi, the fact that she broke the rules.”

Then they turned to what was supposed to be the topic of debate: the heavily edited Planned Parenthood videos that purport to show the organization engaged in the “sale” of fetal body parts -- but which of course show no such thing. Fiorina was no more coherent on that topic.

Of course the Romney 47 percent video wasn’t edited, at all. I’m not sure what point she was trying to make about Edward Snowden, except maybe she’s endorsing his leaks of classified information because it was something “that we needed to see?” That would be a unique take for a Republican, so I’m probably overthinking it.

When Wallace, for at least a moment, did his job, and asked Fiorina where women would get the preventive care Planned Parenthood provides if Republicans succeeded in defunding them, she replied glibly:  “Oh, gee, I thought Obamacare was supposed to take care of that.” And went on: “I'm so tired of the canard about women's health. There are plenty of places where women can achieve and have these services.”

I haven’t paid attention to Fiorina this election cycle. I forgot she was so bad at this politics stuff. I’d been feeling bad she was being left out of the first Fox-sponsored GOP debate, which will surely be dominated by Donald Trump. But after her sad performance on Sunday, it's possible her appearance was Fox’s dastardly ploy to justify leaving the only woman in the GOP field off the debate stage, because she didn’t come off like a serious presidential candidate.

Of course, if not coming off like a serious presidential candidate was a barrier, most of the GOP field would be excluded from the debate. Mike Huckabee’s claim that President Obama is “marching the [Israelis] to the doors of the ovens” is crazier than Fiorina complaining “I’m so tired of the canard about women’s health.” The bottom-tier candidates are flailing wildly to get on the main stage Aug. 6. I don’t think Fiorina helped her cause, though, with her weak performance Sunday.