Forced into togetherness: When the economy fell apart, our family came together

We moved in with Gramps for financial reasons. But within this so-called hardship, we found tremendous rewards 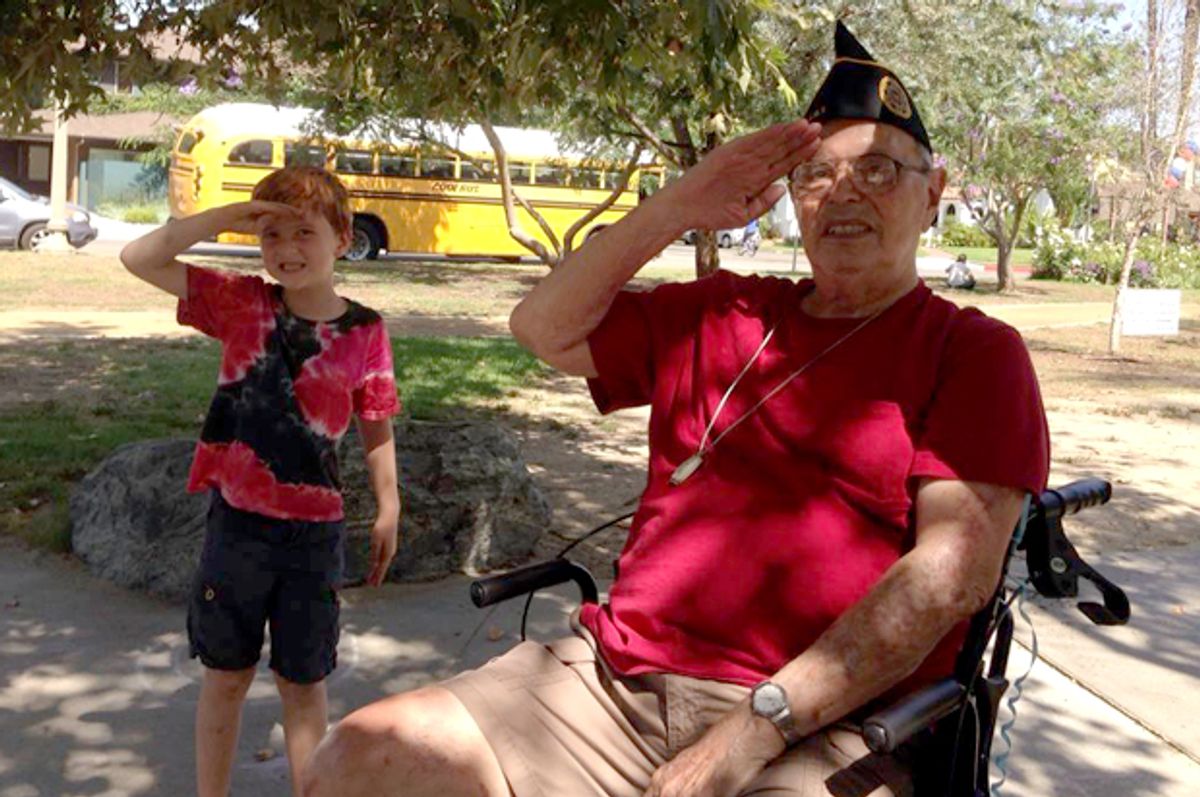 The author's son and grandfather
--

It’s common conversation now that our generation will not fare as well economically as our parents'. But what if economic measures aren’t the main measure of quality? From 2013 to 2015, my husband and I shared a home with my grandfather. Our motivations were not entirely altruistic, as affording a home in Los Angeles is not easy, and my grandfather helped with the mortgage payments. In return, we took care of him. What I gained from this experience was not merely a piece of real estate (although that was admittedly a tremendous economic benefit) but a deep appreciation for the value of intergenerational living. I wonder how many other families are having the experience that we did—being forced into togetherness due to life circumstances and financial considerations—but coming away with a renewed appreciation for the multigenerational experience.

The number of multigenerational families in the U.S. is on the rise.  Partly, this is due to young people living with their parents, as establishing economic self-sufficiency in the post-crash economy is no easy feat. In addition, boomers are moving into their aging parents’ homes as a result of financial hardship (and not necessarily to take care of elderly parents).

As a member of this statistical trend, my family was somewhat unusual. We were adults with careers and were financially self-sufficient. We did not have to move in with a relative to survive. But the one thing we couldn’t do on our own was purchase a home in L.A.

From 2008 to 2012, my family was punched in the face on multiple fronts. My husband and I had just had a baby when the economy collapsed, allowing us to work and save less. Then, one by one, my relatives started dying, including my mother. The multiple deaths left my grandfather alone, trying to care for himself.

Gramps was living the sweet bachelor life he’d never experienced, since he had gone straight from serving in WWII to being married with kids. He seemed a little excited about the prospect of time alone and the freedom to do as he pleased. That lasted a couple of months. He started complaining that he had no one to talk to. We also noticed things that made us worry—poopy sheets, moldy food in the fridge. The woman who came three times a week said it was getting harder and harder for her to take care of him. We suggested assisted living, but Gramps came up with a more radical idea. Why not spend all that money we’d spend on assisted living and all buy a house together?

At first, the idea seemed outrageous. However, one of the main influences on me during this time was my adult English as a Second Language students. Always looking for discussion starters for my advanced pupils, I occasionally brought up the differences between treatment of the elderly in the U.S. and in their countries, and it was more their facial expressions than their words that moved me. It was so completely obvious to them that elderly people belonged at home. The idea of putting older relatives into institutions was foreign for them. Partly, this was because in their countries, there were few affordable and decent institutional options.

However, there was more to it than that. I could sense that my students felt that by not living with an elderly person, I was missing something essential about the experience of life. And I became curious about what that might be.

Moreover, my grandfather’s life story beckoned for kindness and care. He had never had an easy time of it. Born in 1922, he had lost both his parents at the age of 4. He lived for some time with a neighbor and then finished his education at the Hebrew Orphan Asylum in Manhattan. At the time we were making these life decisions, my own son was 4. While the story of my grandfather’s sad childhood was well known to me, I suddenly, viscerally realized how awful it would be to lose your entire family at such a tender age. In Gramps’ final years, I wasn’t willing to orphan him again. I wanted to provide him with a family, to surround him with love and life.

We could not afford a house in our chosen neighborhood, where we rented to stay close to an excellent elementary school. L.A. real estate prices go bonkers near good schools, making them really almost private and not public schools. So we couldn’t buy in our preferred neighborhood alone, and there was my grandfather, just begging to help us buy, so that he wouldn’t have to live alone. We discussed for a long time what we were doing. Would it be ethical for us to take on such a responsibility? Would we resent the intrusion into our lives?

We lived with my grandfather for a year and a half. It was tough at first. He watched TV very loud all day. There were many medical appointments to take him to. He took 17 different medications, which I had to sort every week. He occasionally made racist or backward comments that got me riled up. But some wireless headphones, a knack for organization, and knowing when to let things slide got us through the initial adjustment period.

We got into a routine. I came home from work, and we would watch "The Daily Show." He would ask, every time, if the show was on midday, and I would remind him, every time, that I had recorded it. I knew how to make his favorite foods. I took him to movies. We watched basketball together. We got a dog to keep him company.

Things got harder. He became ill. Our caretaking responsibilities increased. There were some gross things that happened with adult diapers. A lot of taking care of an elderly person isn’t pretty. There were hospitalizations. We stuck it out as long as possible, until Gramps lost the ability to walk, and we knew he wasn’t safe at home anymore. Then, we moved him to a board and care with hospice. We still visited every day, since we still gave him his insulin injections. He passed away a few months later.

By sharing space with an elderly person, my life was transformed. I no longer fear death. I know my husband could take care of me if I became very ill. I understand what qualities are needed to grow old and remain happy. (In case you’re curious, it basically boils down to having activities you enjoy doing.) And I launched a writing career because I was working frequently at home. I also got to know my grandfather in a way I certainly did not expect would be so profound and life changing. The man could get a mood lift from a great discount on grapes. We should all be so easily pleased.

Who can say that our quality of life is worse than my parents', who lived the typical American nuclear family lifestyle, often far removed from supporting family? Moving in with relatives can certainly be stressful, but if viewed the right way, it can be life-enhancing. Our culture considers economic interdependence to be a de facto reduction in quality of life. But quality is a subjective measure.

The obvious benefit of having a multigenerational household is that the youngest members of the family get to spend time with the eldest. My grandfather was able to come with us to see our son’s school recitals, experience the joy of new toys and Christmas tree decorations. But the biggest benefits were the subtle, quiet, in-between moments. We’d have a family dinner, and my son would do magic tricks that were not really magic or tell ridiculous knock-knock jokes that made no sense. Those were the only times I saw my grandfather get a belly laugh.

What works for one family might not work for another. While it was necessary and right for us to move my grandfather to board and care when we did, another family might want to see things through to the end in their home—and that’s a valid choice. Another family might never have taken on what we did to begin with—and that’s perfectly valid, too. Some people cannot live together. I don’t want to hold up our experience as the paragon of virtue. It is just an experience that taught me personally that the nuclear family is not necessarily the only option, and it opened my heart to accepting a larger and more loving family than I had previously imagined.

Friends of ours who saw us living this way and not totally imploding from the stress were inspired. One couple moved into a house that they share half the year with their parents. Others began to ask advice about their own aging parents or grandparents. I get it that we took an unusual path, but I wonder if it is a path that will become more usual, as the economy improves, but wages do not really rise. It is difficult now for middle-class people to live the life my parents lived, to buy a house for a couple and their two or three kids. But what if making ends meet by accepting extended family into your home is actually not a step back, but an enlarging, enriching experience?

With the rise of services like Uber and Airbnb, the sharing economy has become ascendant. Helping each other and getting a bargain in the process is just good sense. In the most intimate realm of family life, more and more of us might start to see that sharing space and benefiting from wisdom and financial support from our elders, in exchange for our hard work and care, is not a burden but a huge benefit, socially, economically and spiritually.

Julie Cross is a writer and teacher living in Los Angeles.