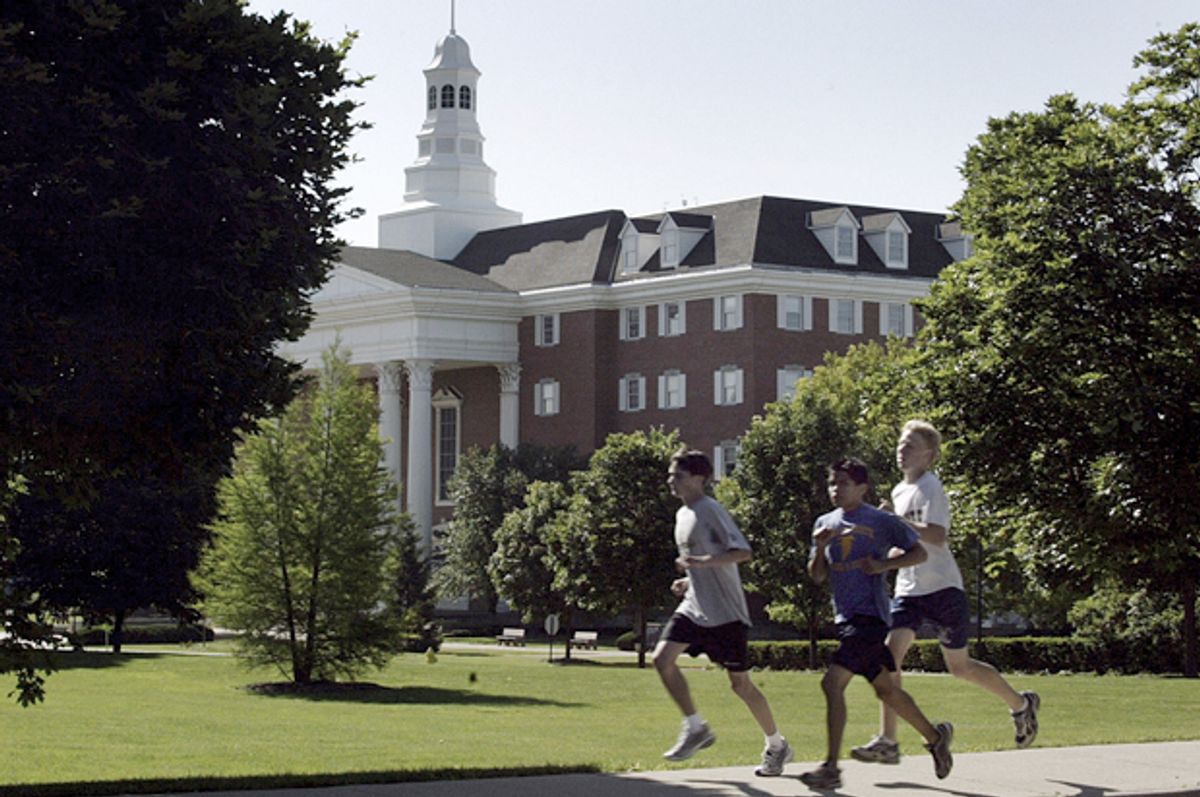 Because nothing says you're taking a stand for all that's good and right like making it harder for young people to have access to decent, affordable healthcare, as of Friday Wheaton College will stop providing health insurance for students. I don't know about you, but I feel closer to God just thinking about it.

The announcement was made earlier this month in response to a long contentious element of the Affordable Care Act that would include coverage for contraception. As the Chicago Tribune reports, "Wheaton College was among dozens of Christian nonprofits, as well as businesses such as Hobby Lobby, that argued the mandate was an assault on religious freedom. The college appears to be one of the first to move its protracted legal battle from the courtroom to campus…. Officials at the west suburban evangelical school said a compromise provision that would require them to notify the government of their religious objections would prompt the school's insurance carrier to provide the coverage directly to students."

And that, I guess, would be morally untenable. The decision will affect roughly seven hundred students, or about a quarter of the student body, by, as reporter Manya Brachear Pashman says, "forcing them to shop for other plans just weeks before their coverage ends." At issue, mainly, is coverage of IUDs and morning-after pills, which some religious groups view as a form of abortion — and which, by the way, are not. Two years ago, George Washington University health policy professor Susan Wood made it clear when speaking to NPR, "It is not only factually incorrect, it is downright misleading. These products are not abortifacients. And their only connection to abortion is that they can prevent the need for one."

Speaking to students last week, Paul Chelsen, the school's vice president of student development, explained, "What has brought us here is about student health insurance, but it's bigger than student health insurance. What really breaks my heart is that there are real people that are affected by our decision. But if we don't win this case, the implications down the road in terms of what the government will tell us what we can and cannot do will be potentially more significant. I acknowledge that students have been hurt by this decision and I regret that."

And I'm sure that will mean so much to the students — especially international ones and those who aren't riding on their parents' plans — for whom an emergency room visit or prenatal care could soon be a catastrophic expense. And the irony, especially for an evangelical institution, is a school like theirs is less likely to attract students who even support or need access to emergency contraception. Because principles! On the upside, the school says the decision "doesn't affect access to the campus health clinic" and won't affect employees, and that it will "set aside money to help students who might struggle to pay for an increase in the cost of insurance" while investigating a possible student self-insured plan.

The college, whose Web site was inexplicably down Thursday, has been busy taking plenty of heat on its Facebook page from users noting, "Pregnancy and childbirth was the #1 killer of women in all of human history. Thank you Wheaton for returning to the Stone Age." A spokesperson told the Chicago Tribune that the school remains "committed to doing everything it can to provide high-quality health care in accordance with its religious convictions." Whatever that means.

It's understandable that if you're an institution with conservative religious values, it may be difficult to reconcile those with the workings of the larger outside world. Schools don't exist in a bubble, and that can lead to hard choices if they don't wish to create a divide between what they preach and what they permit. It also often leads to a whole lot of spiteful and shortsighted behavior, like forcing out hard-working and well-regarded teachers because they're gay, or cutting off the most vulnerable members of your community from more efficient access to basic healthcare. How very Christian. I'm sure Jesus would be thrilled.