Are ultrasounds the newest weapon in the war on women? 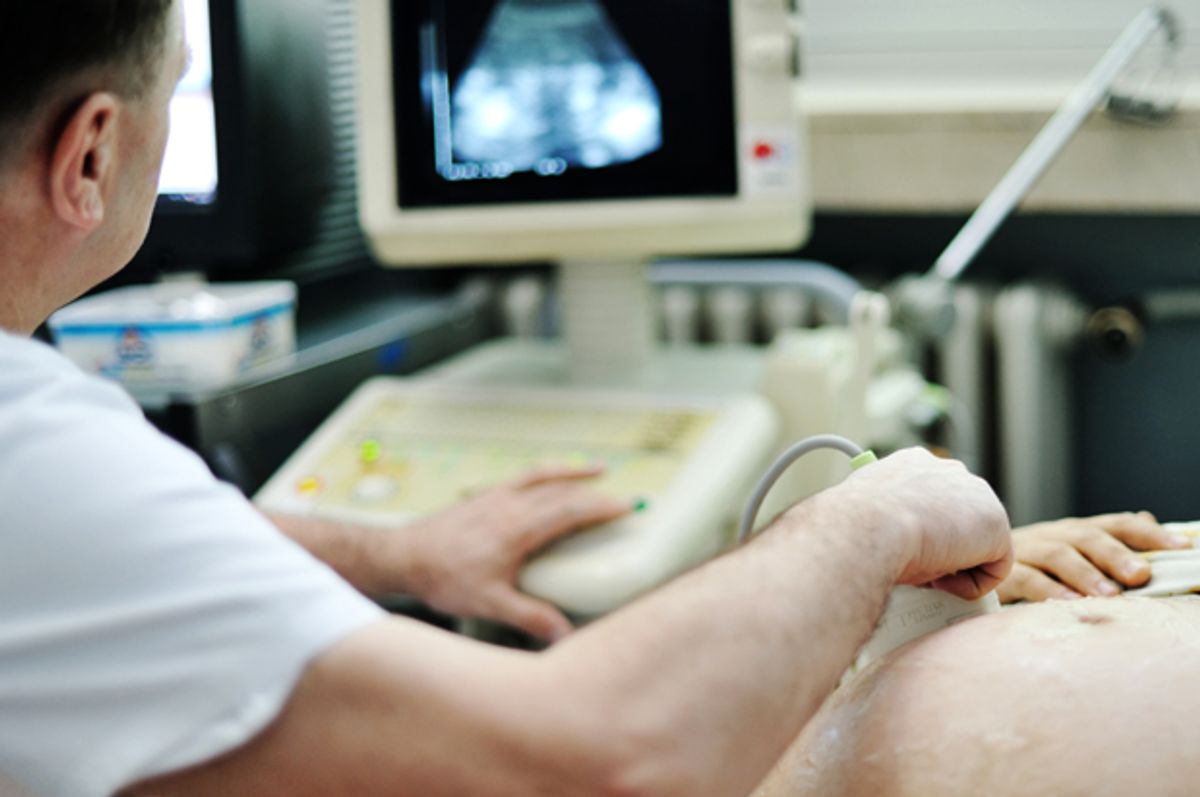 When I was pregnant for the first time, I was almost nine weeks along when I received my first ultrasound. We weren’t exactly sure when we conceived, so the timing was meant to pinpoint a due date and check for a heartbeat in one stop. After a year of trying, seeing the smudgy, ghost-white form, all head and chest and tiny limb-buds, melted my heart. We took the printout home, quickly dubbed our child “The Buddha” and shared it on our blog, where most of our friends were kind enough not to point out that it really didn’t look like much of anything other than two massive circles with a few stubby bumps poking out.

When I was pregnant for the second time, we again had been trying for a year. My first ultrasound was at 12 weeks along, after a first trimester check up where the doctor could not find a heartbeat. I held my husband’s hand tightly as they inserted the probe, looking for answers after an abdominal scan showed a smaller than usual form, no movement, and the obvious lack of the tiny flicker in the chest that shows that life is still growing. Still nothing. The technician gently told me the baby had not developed past the eighth week, and that I would not be giving birth. Then, tentatively, she asked me if I wanted a printout of the ultrasound to keep.

In my head, I shouted “No!” at her, appalled, but out loud my refusal likely didn’t make it much above a whisper.

My next ultrasound was not quite a year later. I was pregnant again and terrified that I could lose another baby. It was 20 weeks in, and my first ultrasound of the pregnancy, because, despite my recent loss, I wasn’t considered high-risk so my insurer wouldn’t offer me one earlier. It was a nerve-racking experience already, and heightened by a technician that was evasive about the results. I have no pictures from it, although the reams of angles and close-ups provided in the follow up appointment more than made up for the neglect.

My final ultrasound was one year after that. It happened in a surprise pregnancy I initially did not want. That child in some ways rests even closer to my heart than his siblings, and his first photo, his black-and-white in utero profile, rests in a drawer with all of the others.

More from DAME: Will These Latest Attacks Bring Planned Parenthood Down?

Ultrasounds and their pictures are powerful, and it’s a power that abortion opponents are only too eager to harness. From the creation and dissemination of The Silent Scream in the mid-to-late 1980s to the introduction of mandatory ultrasound laws in the late 2000s—especially those that require the patient to listen to a physician describe the contents of the image—ultrasounds have become a bludgeoning weapon in their battle to end legal abortion.

There is little doubt that as an emotional tool they are effective at changing minds. Former Planned Parenthood worker Abby Johnson claims watching one during an abortion was what made her quit her job and become a pro-life activist. The Silent Scream is viewed as the “cri de coeur” that energized the anti-abortion movement and flipped many from supporting legal abortion to seeing it as murder. Today, just referencing the image of an ultrasound has been focus-grouped by GOP pollsters as the most effective way to soften the image of Republican candidates running for office and build a wall against accusations of being anti-women because of their opposition to abortion and birth-control access.

More from DAME: These Women Need Us to Remember What Bill Cosby Did to Them

But as a means of changing the minds of those who are pregnant and seeking an abortion, they have virtually no effect. While abortion opponents claim that between 70 and 90 percent of those who see an ultrasound before an abortion decide not to terminate the pregnancy, they neglect to add that the numbers refer to those who obtain their ultrasounds at crisis pregnancy centers, a sign that many already are not convinced that they want to end the pregnancy in the first place.  Meanwhile, those who undergo the mandatory ultrasounds at an abortion clinic almost universally go through with the termination, regardless of whether they choose to look at the image or do not.

More from DAME: When Will We Stop Putting the Onus of Sexual Assault on Girls?

As a political tool, I can’t help but think that the same effect occurs. When a politician mentions the in utero picture of a grandchild or that grainy image from the first-born, it no doubt does soften the image of the candidate in question. As far as causing a person to view that ultrasound image as a reason to make abortion illegal in absolutely every instance only those who were already inclined to do so will make that connection. Those aren’t are more likely to see that ultrasound as the earliest picture of a child that now exists in the real world, but not as the symbol to rally behind while pregnant people are sent back to procuring and inducing their own illegal abortions. That a person truly can have both beliefs simultaneously continues to baffle abortion opponents.

It has been almost six years since that somber ultrasound where I learned my pregnancy was over. Although the memories of that appointment are still sharp, they have faded, softened by the images of the children that I have held since, both in my body and in my arms. There is not a single moment where I regret not keeping the picture of the pregnancy that wasn’t meant to be. My drawer full of ultrasound pictures is more than full enough.