Dear White America: Your toxic masculinity is killing you

Toxic white masculinity, and the right-wing politics which nurture and protect it, are hurting millions every year 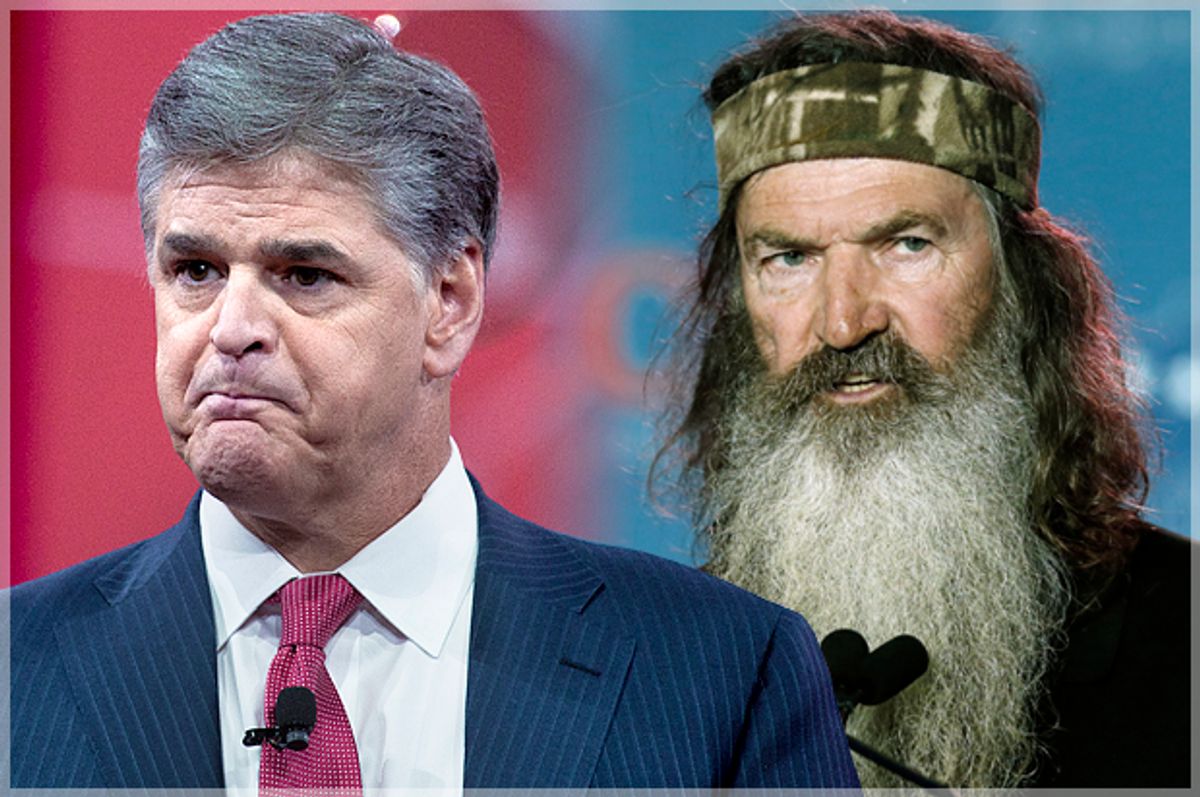 I am your friend. I have written several letters of this type to you before. It pains me to have to do so again. What I am going to share in this letter may be commonsense for many white brothers and sisters. Other White Americans may be surprised. Because our society is so segregated, people of color often do not have many opportunities to talk with white people in a direct way regarding our sincere worries about the problems in your community. I hope that this open letter can be part of a broader conversation in that regard.

When a person suffers from chronic pain they often find ways to compensate for it. Some people self-medicate with drugs or alcohol. Others develop the mental discipline necessary to compartmentalize their physical suffering. Others cocoon themselves in a bubble of denial. Because I am your friend, I am going to be honest with you. White America is suffering from a type of cancer. It is hurting you; it is killing your children; it is damaging families; it hurls shrapnel in many directions, maiming and otherwise bringing an end to the lives of those people who are unfortunate enough to be in its blast radius. If you want the truth, this is it: toxic white masculinity, and the backward right-wing politics which nurture and protect it, are hurting millions of you every year.

I know that is hard to digest. But, because I care about you White America, I am obligated to tell you the truth, even at the risk of your discomfort.

For many of you, the very idea that there is such a thing as toxic white masculinity is both surprising and enraging. Denial and anger are a very normal reaction when an uncomfortable truth is called to account. But it is the truth. Toxic white masculinity is a fear of the world changing to the disadvantage of white men, and where what too many white men take as natural rights are actually going to be exposed as unfair advantages, advantages which were gifted by a lottery of genetics and fortune of birth, as opposed to earned merit.

Toxic white masculinity defaults to violence as a means of maintaining social and political control. It clings to guns as a symbol of “real” male identity. It fears women as equals; it lashes out at non-whites who are somehow “stealing” white men’s jobs and power. Toxic white masculinity sees “liberals,” “progressives,” “social justice,” and “feminism” as enemies -- out of a fear that “white masculinity” will somehow be made obsolete or extinct. The dream worlds and paranoid fantasies of angry white men are distractions that look to some type of Other as the preeminent threat to America’s safety and security. The reality is of course, very different.

In reality, right-wing domestic terrorists and mass shooters are the number one threat to America’s safety and security since September 11, 2001.

White men are approximately 31 percent of the United States population. And yet, white men are nearly 63 percent of those people who commit mass shootings. Such behavior, among any other group, would be considered pathological and a public health crisis.

Dylann Roof turned his toxic white racist masculinity on a black church in Charleston. And John Houser -- a white, right-wing, conservative, Christian fundamentalist, an anti-feminist, woman-hating Nazi sympathizer -- directed his rage towards a movie theater in Lafayette last month, where he killed three people and wounded eight others.

Because I am your friend White America, I will share another truth with you: While the mainstream news media will run away from subjects that make you uncomfortable, it is no coincidence that "Trainwreck," a movie written by a white Jewish feminist comedian, was the target of John Houser’s lethal actions. It was not “mental illness” which made John Houser shoot those people in Lafayette, although such a claim is a common deflection that prevents a serious discussion of white masculinity and mass shootings. One can be “mentally ill” separate and apart from their violent impulses. No, it was extreme right-wing politics and toxic white masculinity that drove Houser to kill.

This is just the tip of the iceberg. The killing and abuse of women by men in the United States -- the vast majority of it committed within the same “racial” group -- is so common that it is rarely deemed to be newsworthy by the mainstream news media. This is a disgusting national embarrassment.

Toxic white masculinity is a complex problem. And you cannot fix it unless you also confront how toxic white masculinity is nurtured and encouraged by your news media and political representatives. While I do not think that you are a victim of your news media and political parties, you have nonetheless been done a disservice by them.

Fox News is your mouthpiece: 92 percent of its prime time viewing audience is white. Fox is the most popular cable news network in the United States. Millions of people watch it on a daily basis. Fox News is part of a propaganda machine that consists of the Internet, radio, and social media. This has created an alternate reality for many White Americans where down is up and up is down, so to speak. Researchers have shown that the right-wing media actually makes its public less knowledgeable about empirical reality and current events than those people who do not watch or listen to it.

The white identity politics, grievance mongering, conspiracies, paranoid thinking, eliminationist rhetoric about liberals and progressives, hostility to women, rage against immigrants, anxiety about those who are not “Christian”, and mainstreaming of white supremacy and white racial resentment, are the fuel for toxic white masculinity. The right-wing media gins up and encourages such sentiments because it is dependent on them for viewers and ad revenue.

The Republican Party, meanwhile, is America's most prominent white identity organization. Since the end of the civil rights movement, the modern GOP has fused together conservatism and racism as its name brand. In the Age of Obama, the Republican Party has found itself increasingly dysfunctional as its politics are seemingly unable to evolve beyond “hate the black guy in the White House and anything that he proposes," however reasonable. In many ways -- the fetishistic embrace of guns, hostility to women’s rights, Islamophobia, symbolic and overt racism against black people -- the policies and talking points of the contemporary Republican Party are toxic white masculinity as a campaign platform. Together with the alternate reality created by the right-wing media, the Republican Party has become so radicalized, breaking many of the standing norms of consensus politics in modern American politics, that it no longer functions as a responsible political organization.

White America, you have been confused, misled, and lied to by your primary political party and media. This is hurting you in many ways.

The American economy is broken. Wealth and income inequality are severe. The psychological wages of being White in America may still exist, but they are not translating into the material wealth they once did in the not so recent past. For example, there are more White Americans on welfare and other types of public aid than any other group. White Americans also receive a disproportionate percentage of public assistance dollars. As Robert Putnam details in his new book "Our Kids: The American Dream in Crisis," the life opportunities and upward mobility of White America are increasingly imperiled. The abuse of prescription drugs, as well as illegal narcotics such as heroine and methamphetamines, is a severe problem for White America. The sum total of these and other troubles have left white folks -- white men especially -- less hopeful and feeling more insecure and angry about their future.

It is en vogue as of late to talk about the concept known as “white privilege.” I believe that such language often does more to distract than it reveals. I will not use it here. Given the many problems you are facing in these times of trouble, tumult, and economic peril, you are likely not feeling very privileged at all. I still have great hope for the possibilities that folks can come together to find shared and common concerns across barriers of race and class. But as much as I find inspiration in such dreams -- and the examples history has provided us of such alliances in the United States and elsewhere -- I will restrain myself.

Instead, I will appeal to your most basic self-interest.

White America, your media and political leadership have created a broken politics and economy that have left you less secure, less safe, and less upwardly mobile than generations past. But hostility and anxiety towards people who may have a different skin color than you is fool’s gold. White America’s leaders, and the plutocrats to whom they owe their allegiance, have been using that fake money to hustle and manipulate you for centuries.

White America, toxic white masculinity has provided a type of succor and protective blanket for many of your men. But this toxic white masculinity is killing your women and children -- and even hurting and killing your men as well, both in the literal physical sense, and the figurative one, damaging their capacity to live full and emotionally healthy and satisfying lives.

White America, I end this open letter as I began it. I am your friend. I care deeply about your health and well-being. You can make a better way. But first, you must choose to do so.