All I wanted was one person to say, “Yes, you’re fat, but that’s not a bad thing": Coming to terms with my post-baby body

I was sick of hearing I'd get my body back. When I finally gave up hope for an "idealized shape," I found freedom 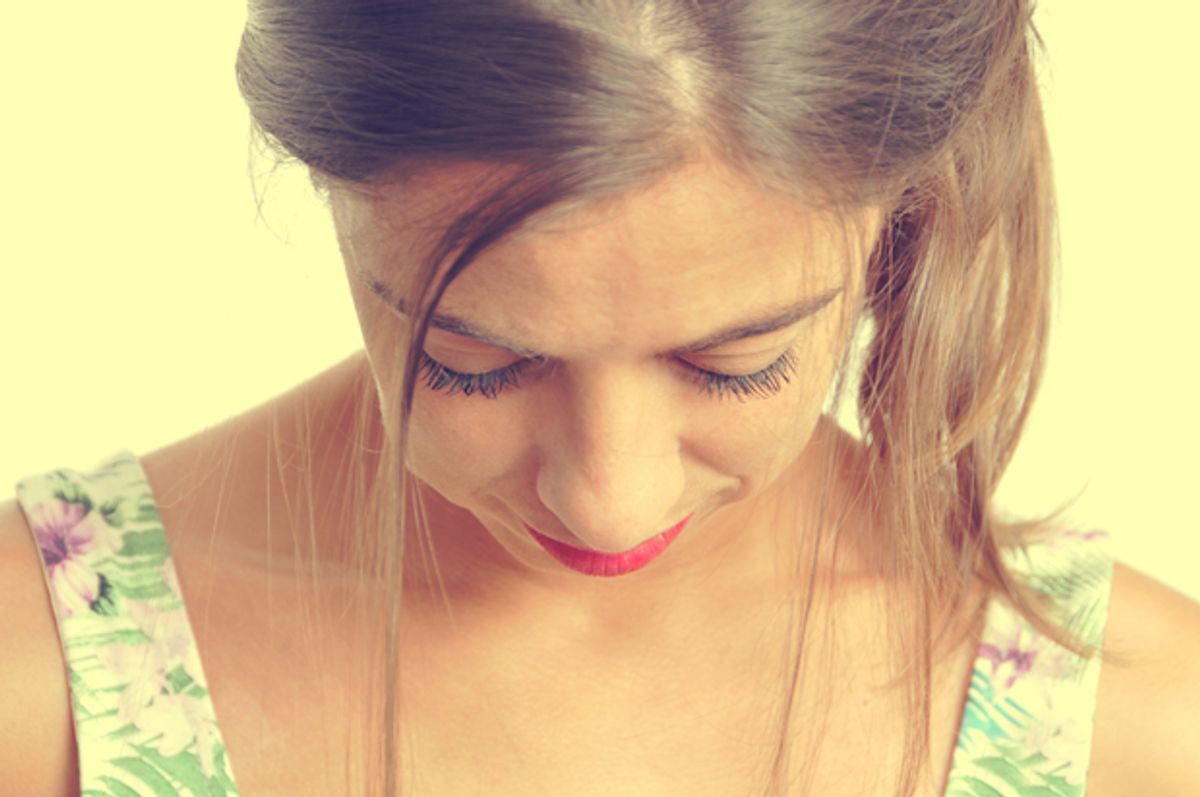 I became a mother before I fully grew into my own skin. I was nearly 17 years old when I had my first baby, and everyone was wearing crop tops that year. Britney Spears and Christina Aguilera displayed their taut midriffs in hit music videos. The poster for “American Beauty” featured a single red rose over a smooth, flawless belly. Friends would complain about their slightly protruding bellies; they thought they were fat. Me, I had a mom belly. Clearly plump. Zero definition. Stretch marks ran along my sides, deep and dark, altering the color and texture of my skin forever. If you put a picture of my belly next to that “American Beauty” poster you’d think you were looking at bodies from different universes. Whatever universe my body snuck out of, I wanted to beam it back.

“Ugh, I feel fat,” my mom frequently complained. She taught me just how complicated and uncomfortable “fat” can be. I learned it the same way first words are learned, not from explanation but from context and repetition. I wonder how many times she had to complain in front of a mirror, or while squeezing into her jeans, for me to understand all the subtleties of feeling fat.

If you feel full, you feel fat. If you feel lazy, you feel fat. Sweaty, also fat. If your clothes are a little tight it means you are fat and you end up throwing an adult tantrum about it—no one wants to leave the house feeling fat. If the curves of your body don’t align with society’s ideals, if just one curve bends slightly out of place, you’re fat. My new post-pregnancy curves were misaligned, and I could feel it.

My friends would try to reassure me—just as they did each other—that I wasn't fat.  But the objective truth was that “fat” perfectly described my body at the time.

During my pregnancy I gained 62 pounds. After my son was born I was around 40 pounds heavier than I was pre-pregnancy. That might not seem like a whole lot, but I stand just shy of 5 feet tall and all that weight didn’t have much real estate to choose from. Even five extra pounds can cause my clothes to fit awkwardly; 40 made me look like a completely different person.

I had trouble finding clothes that fit right and also were appropriate teenage fashion. Maternity clothing, although comfy, was so far from what my friends were wearing that I never wore it out of the house. All the jeans I liked fit awkwardly. Years later, after I lost the weight, I threw a picture in a friend's face. "I was fat. Admit it!" She did, without hesitation, and explained, “I didn’t want to hurt your feelings.”

It bothered me that she lied. It didn’t ease my mind to know it was only to spare my feelings. It hurt because just thinking that my feelings needed protection from the word "fat" only reinforced the notion that "fat" was something I should feel bad about, that I should feel ashamed.

All I wanted was for one person to say, “Yes, you’re fat, but that’s not a bad thing.” I wanted my reality acknowledged. I wanted to be told my body was OK: fat, loose skin, buried belly button, stretch marks, and all. I begged a few friends, as well as lovers, to just tell me the truth. “I know I’m fat, just say it. I won’t be mad.” Not one of them took what they thought was bait. They just looked at me, with pity in their eyes, and lied.

“Don’t say that.” “You’re not fat.” “You just had a baby.” They said everything they could to try to make me feel better, but nothing that was loving toward the way my body really was.

Of all the things my friends said to me the worst was, “You’ll lose the weight.” Every time I heard those words, I felt completely alone. My friends couldn’t understand how much my body really changed. It wasn’t as simple as losing the weight; I’d still have loose skin and stretch marks. My body would never be the same and I knew it. But my friends hadn’t yet examined society's standards and their responses were only a well-intentioned extension of all the messages the media fed us all.

The media was screaming at me to “get back” to my pre-pregnancy body as soon as possible. I wasn’t supposed to accept or embrace the changes that came with carrying a life inside me. As if the “mom body” isn’t a natural and normal body type but a deviation from what a real body is supposed to look like.

I told myself I would never be attractive. I thought about how I would never be able to look back fondly at pictures from my teen years and say, “I used to have a nice body.” I thought I’d never be able to wear a bathing suit without feeling uncomfortable, or “fat.” And I was supposed to just accept all of this shame instead of accepting myself. Accepting it all as a valid sacrifice for my baby, instead of questioning why my body couldn’t be labeled as attractive.

By the time I was 18 I was back to my pre-pregnancy weight, but not shape. This is when I lost hope that my body would ever hold an idealized shape.

Loving ourselves can only come when we strip societal judgments from words like “fat” and describe our bodies accurately, and with acceptance. It didn’t happen overnight for me. Honestly I don't even know if I’m there yet.

I became pregnant with my third child a few years ago. It had been more than a decade since I had last been pregnant. This time, I chose to embrace the metamorphosis.

I fell in love with my pregnant shape and when I gave birth to my third child and had my first shower after delivery, I cried as I washed my belly—not because I felt fat, but because I felt empty. I looked at the linea nigra, the vertical brown stripe some women get on their belly when pregnant, with love and acceptance, worried that it would fade before I was ready to let go. I was sentimental about my body. I wanted to linger in the changes, remembering the details of each shape my body held. But I also wanted to embrace what was to come, never holding on to a shape that no longer fit me. Finding beauty in both past and present; I have been, and will be, many versions of beautiful.

Navarre Overton blogs at Raising Revolution. She is a stay-at-home mom, feminist, freelance writer, and student. Follow her on Twitter.