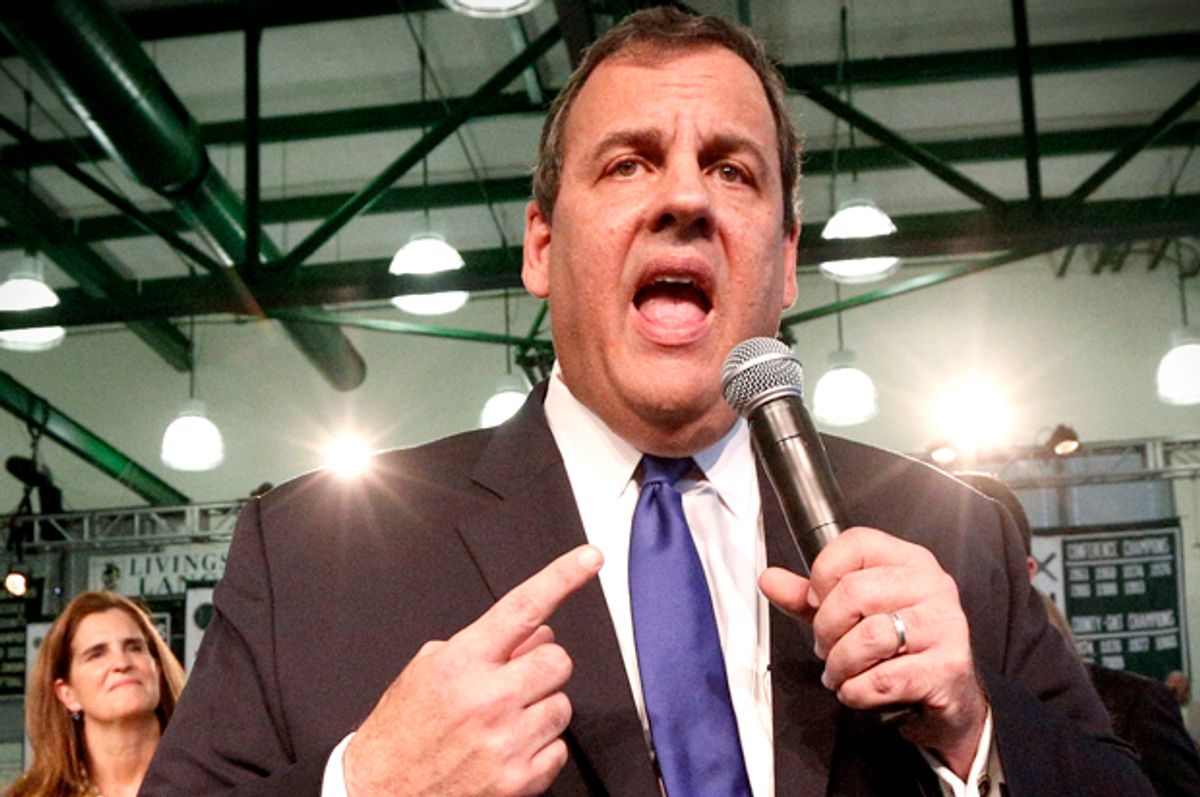 Republican presidential candidate Chris Christie said during a television interview Sunday that the national teachers union deserves a "punch in the face."

Christie made the over-the-top comment during CNN's State of the Union with Jake Tapper on Sunday after the host asked him about his longstanding advice on when to dole out a physical assault.

The American Federation of Teachers endorsed Hillary Clinton for the Democratic presidential nomination earlier this month, becoming the first national union to back any candidate in the 2016 primary. The other main teachers union, the National Education Association, has yet to back a candidate.

“They’re not for education for our children,” Christie complained to Tapper. “They’re for greater membership, greater benefits, greater pay for their members. And they are the single most destructive force in public education in America. I have been saying that since 2009. I have got the scars to show it. But I’m never going to stop saying it, because they never change their stripes.”

While campaigning for re-election in 2013, the New Jersey Governor scolded a local teacher after she challenged him on his claims that the state’s schools were failing. “I am tired of you people," Christie yelled at the teacher, "What do you want?”

Reaction to Christie's latest provocation has been swift and forceful. Wendell Steinhauer, president of the New Jersey Education Association -- the local affiliate of the national NEA and New Jersey's largest teachers union -- called on Christie to "resign as governor immediately," following the remarks.

"Chris Christie's instinct is always to threaten, bully and intimidate instead of build consensus and show true leadership," Steinhauer wrote in a scorching statement.

"That's not news in New Jersey, where voters overwhelmingly reject his immature and inappropriate behavior as well as his failed policies and lack of leadership," he wrote. "It is clear from polling that voters in the rest of the country also reject his rhetoric and his behavior."

Christie placed ninth in the latest national polls and appears to have secured his podium on the main debate stage this Thursday but his approval rating with Garden State voters stands at only 30 percent.

In an interview with CNBC's John Harwood published today, Christie said of his 16 other Republican primary opponents: "Some people are feeling the pressure to try to be outrageous to get on the news. If you think you've got the best product, you've got to be patient. Slow, steady progress. So I'm not going to get into the hyperbole."

And of his own candidacy, Christie said, "How would I see myself in this race? As being the most specific, most substantive guy ... so it is those communication skills, which are extraordinarily important for a president to be successful."

Ahead of this week's debates, Christie will be campaigning in the crucial early state of New Hampshire, but he was reminded this weekend of his troubles back in his home state as New Jersey journalist Steve Politi described the scene where Christie was not booed once, but twice: "It was one long happy celebration at Monmouth Park for the great American Pharoah's latest victory. At least, that is, until Gov. Chris Christie stepped into the Winner's Circle to present the trophy":