Smiling their way to the apocalypse: How the GOP could finally address global warming (and why they won't)

With their first presidential debate approaching, Republicans should take the chance to finally admit the truth 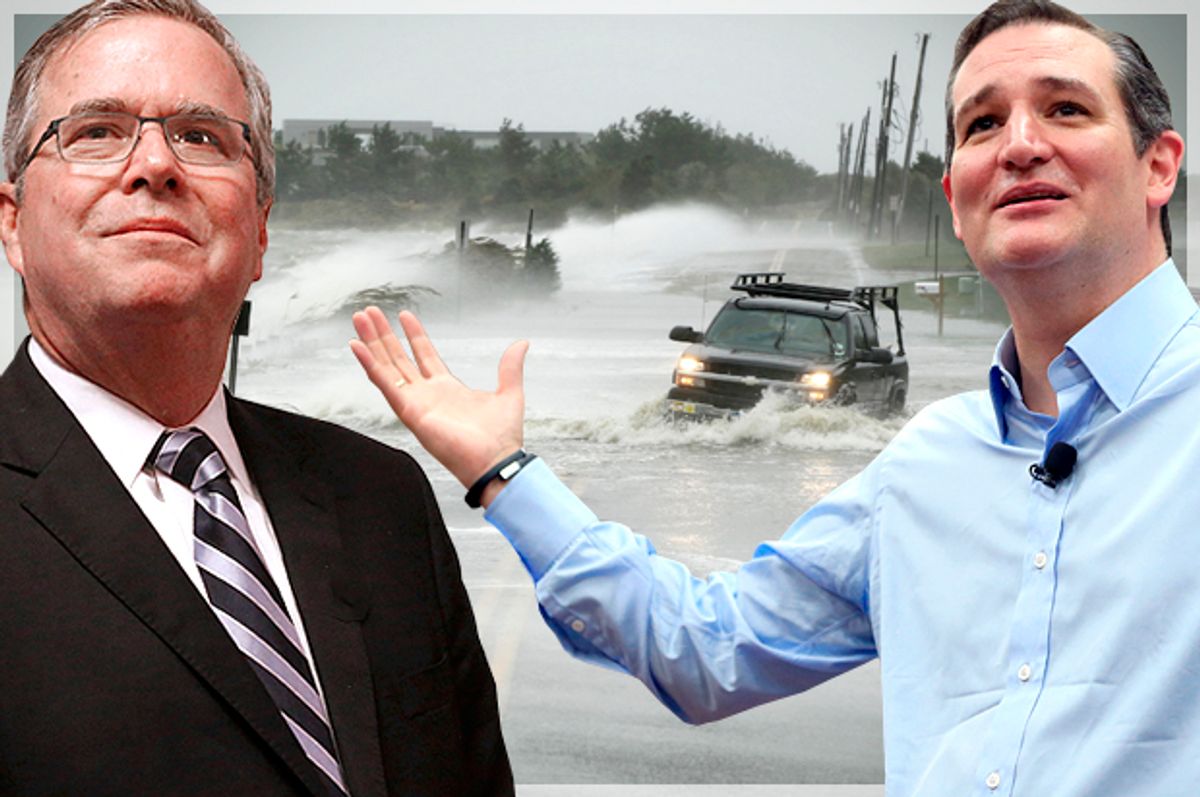 Today, President Obama released the final version of his latest and boldest climate policy yet -- the Clean Power Plan -- which aims to lower the carbon emissions produced by power plants around the country.

Power plants produce the largest amount of carbon dioxide in the United States, and the EPA expects their carbon emissions to be about 30 percent lower in 2030 than they were in 2005, if it all goes according to plan. The policy will give each state an emissions reduction goal; it will be up to them to comply and submit a plan to meet that goal. Of course, we must assume that in certain states, where leaders still deny the existence of climate change, this plan will be fought -- and if this does happen, the EPA will have to impose its own plan. That is, after all, what partisan politics have come to in America.

Indeed, the first debate for the Republican primaries is closely approaching, and if there is one issue that is almost certain to be ignored by both Fox News moderators and GOP candidates, it is climate change. The fact that a verifiable truth like climate change has become the ultimate emblem of partisan politics reveals just how dysfunctional and corrupted the American political system has become. It was not so long ago that Margaret Thatcher, who was hardly a leftist, said of global warming:

“The evidence is there. The damage is being done. What do we, the international community, do about it? … It is no good squabbling over who is responsible or who should pay. We have to look forward not backward, and we shall only succeed in dealing with the problems through a vast international, co-operative effort.”

Now there is some forward thinking from a politician most famous for union-busting and neoliberalism.

Jump ahead a quarter century, and the evidence of climate change has become even more damning. The oceans are rising and warming rapidly, ice sheets and glaciers are retreating, natural disasters becoming all too common -- as the current drought in California shows -- and yet, half of our politicians  still refuse to acknowledge reality.

Why has this scientific fact become such a partisan issue? It’s not that complicated: Massive multi-national corporations and their billionaire chief executives -- who are destroying our planet, and making astronomical profits in the process -- are legally bribing our elected officials and spreading lies throughout the population. In 2012, the oil and gas industry spent $76 million on political contributions with 89 percent of it going to -- surprise! -- Republicans. This was almost double what they spent in 2008 -- $39,658,963. And 2016 will be no different; we can expect the number to shoot up, maybe over $100 million, while the Republican share of that money, which was 95 percent in 2014, could edge even closer to 100 percent.

Is it any surprise, then, that GOP candidates say things like, “The concept of global warming was created by and for the Chinese in order to make US manufacturing noncompetitive”; or compare themselves to Galileo in their denial of science. The only candidate who seems to remotely accept reality is Jeb Bush, who said in an interview last Thursday:

“The climate is changing; I don’t think anybody can argue it’s not. Human activity has contributed to it. I think we have a responsibility to adapt to what the possibilities are without destroying our economy, without hollowing out our industrial core.”

Hopefully Bush will take this stand come the first debate, but if he does, we can be sure that his opponents will jump on him like a pack of vultures. The Republican field has dumbed down considerably over the past few decades, and the denial of climate change shows this better than any other issue. Their desperation for campaign cash has muddled their minds, turning them into a bunch of dimwitted demagogues.

Republicans haven’t always been this dogmatically anti-environment, though. Ronald Reagan, after all, helped push for the Montreal Protocol, an international treaty to protect the ozone layer, while the Environmental Protection Agency was created under Richard Nixon. But, lets face it, those were simpler times, before corporations and billionaires could spend unlimited amounts of money to place their hand-picked puppets in office.

There is one thing, however, that these Republican climate hawks, who clearly haven't lost their appetite for militarism and war, should look at before Thursday's debate. The Pentagon released a report last week that clearly demonstrates how climate change is not just an environmental issues, but a national security one as well. Will this get the GOP’s attention, and will it be discussed in the first debate?

“The National Security Strategy, issued in February 2015, is clear that climate change is an urgent and growing threat to our national security, contributing to increased natural disasters, refugee flows, and conflicts over basic resources such as food and water. These impacts are already occurring, and the scope, scale, and intensity of these impacts are projected to increase over time.”

Take the current chaos in the Middle East, for example. Earlier this year, a study published in Proceedings of the National Academy of Sciences (PNAS) linked the drought in Syria, which helped contributed to the turmoil that persists to this day, to climate change. The drought -- which lasted from 2006 to 2011 (the end-date coinciding with the beginning of the Arab Spring) -- was the worst on record in Syria and caused a great migration of rural people to the cities after agricultural destruction, while also shooting up the price of food.

Will the Republicans discuss this during the debate? Will they embrace the climate policies the Obama administration is introducing -- which, let's be honest, aren't even close to being enough to meet the full threat of climate change. There is no doubt they will discuss the Iran deal, and claim that it will lead to absolute chaos in the region. But what about the climate? That's already led to absolute chaos, and will continue to destabilize regions around the globe, and yet the GOP continues to deny that such a problem even exists.

Can someone who denies the existence of a scientific fact that the Department of Defense calls a “growing threat to our national security” even be considered to lead this country? I should hope not.