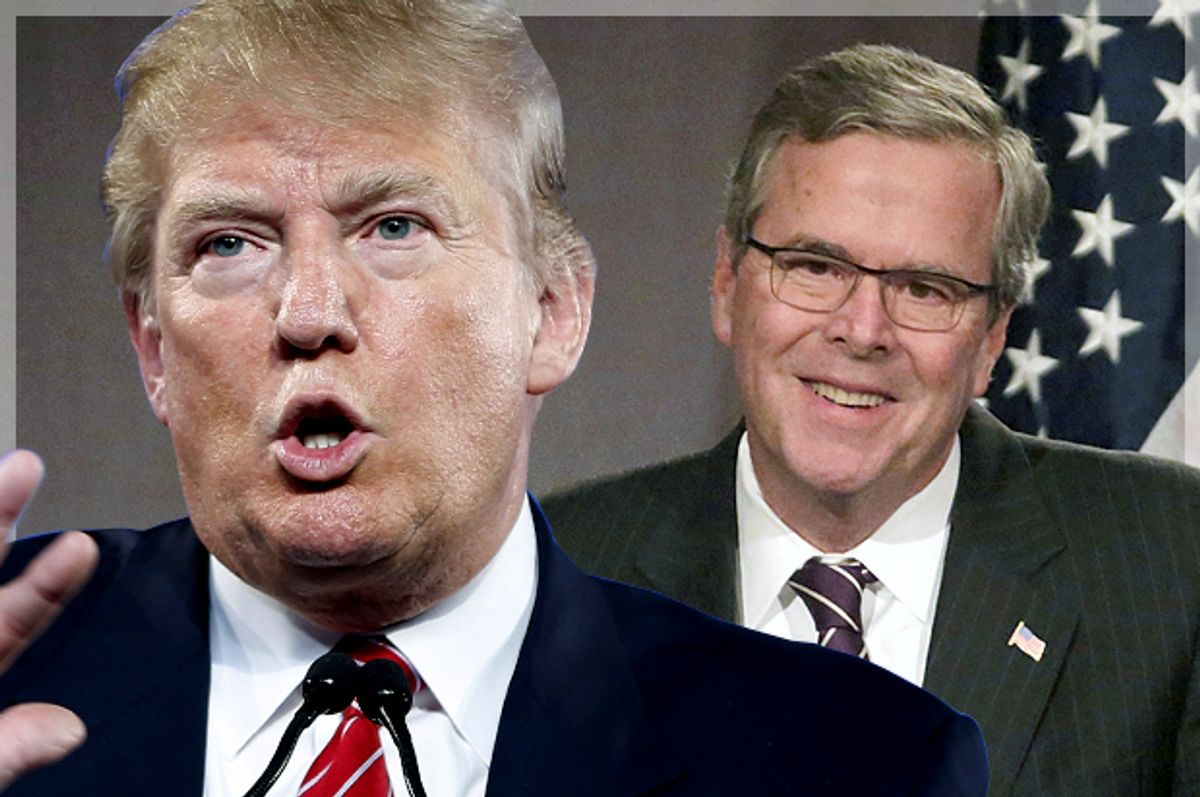 If you’re the type of person who digs it when candidates for president engage in substantive discussions about their policy positions, last night’s Republican primary debate was a disappointing spectacle. Well, truthfully, if you’re that type of person then pretty much all of modern politics is a barren wasteland. But the wildly hyped first GOP debate of the 2016 cycle was especially disappointing, and not just because so much of the back-and-forth was dominated by questions about Donald Trump’s tweets and bankruptcies.

There are plenty of offenders to choose from, but I want to focus on Jeb Bush because, absent Trump, he’s the leading candidate for the nomination and the person who should be under the most pressure to actually spell out what he’d do as president. The core of Jeb’s economic message is that he will create 19 million jobs, and jack up economic growth to four percent annually and keep it there. That’s an aspiration that economists regard as wildly overoptimistic, and no president in the past 35 years has achieved it (the one who came closest was Bill Clinton).

At last night’s debate, co-moderator Chris Wallace noted how extremely rare four-percent growth is and asked Jeb “how on Earth specifically would you pull that off.” Here’s Jeb’s full answer, according to Time’s transcript:

BUSH: We’ve done it 27 times since World War II. I think we need to lift our spirits and have high, lofty expectations for this great country of ours.

The new normal of two percent that the left is saying you can’t do anything about is so dangerous for our country. There’s 6 million people living in poverty today, more than when Barack Obama got elected. 6.5 million people are working part-time, most of whom want to work full-time. We’ve created rules and taxes on top of every aspiration of people, and the net result is we’re not growing fast, income is not growing. A four percent growth strategy means you fix a convoluted tax code. You get in and you change every aspect of regulations that are job killers. You get rid of Obamacare and replace it with something that doesn’t suppress wages and kill jobs.

You embrace the energy revolution in our country. This president and Hillary Clinton, who can’t even say she’s for the XL pipeline even after she’s left? Give me a break. Of course we’re for it. We should be for these things to create high sustained economic growth. And frankly, fixing our immigration system and turning it into an economic driver is part of this as well. We can do this.

If you’re counting at home, Jeb offered one (1) specific policy that he would pursue – approving the Keystone XL tar sands oil pipeline – as part of his plan to supercharge economic growth well beyond the norm. The rest was determinedly vague: “fix a convoluted tax code,” cut regulations, and, my personal favorite, repeal Obamacare and “replace it with something that doesn’t suppress wages and kill jobs.”

That Obamacare comment is tremendous for a number of reasons. First off, this Republican rhetoric about Obamacare being a “job killer” is a relic from the law’s uncertain early days, long before its implementation, when people were free to make all manner of dire predictions about Obamacare’s economic impact. The ACA’s marketplaces have been up and running for a while now and its subsidies have been flowing freely and there’s been no discernible killing of jobs.

Also, Jeb’s preferred replacement for Obamacare – “something that doesn’t suppress wages and kills jobs” – is an echo of Donald Trump’s “something terrific” Obamacare replacement, for which Trump was mercilessly mocked. The difference between two is that nobody expects Trump to have a coherent policy vision. Jeb Bush, on the other hand, is a serious politician who is actually supposed to have answers when asked specific policy questions. But last night he served up his own version of “something terrific” as the healthcare component of his allegedly transformational economic agenda.

It would have been nice had the moderators actually stepped in and pressed Jeb to explain what “something” would look like. But they didn’t, so I guess we’ll just have to have faith that Jeb’s plan, like Trump’s, will be “terrific.”