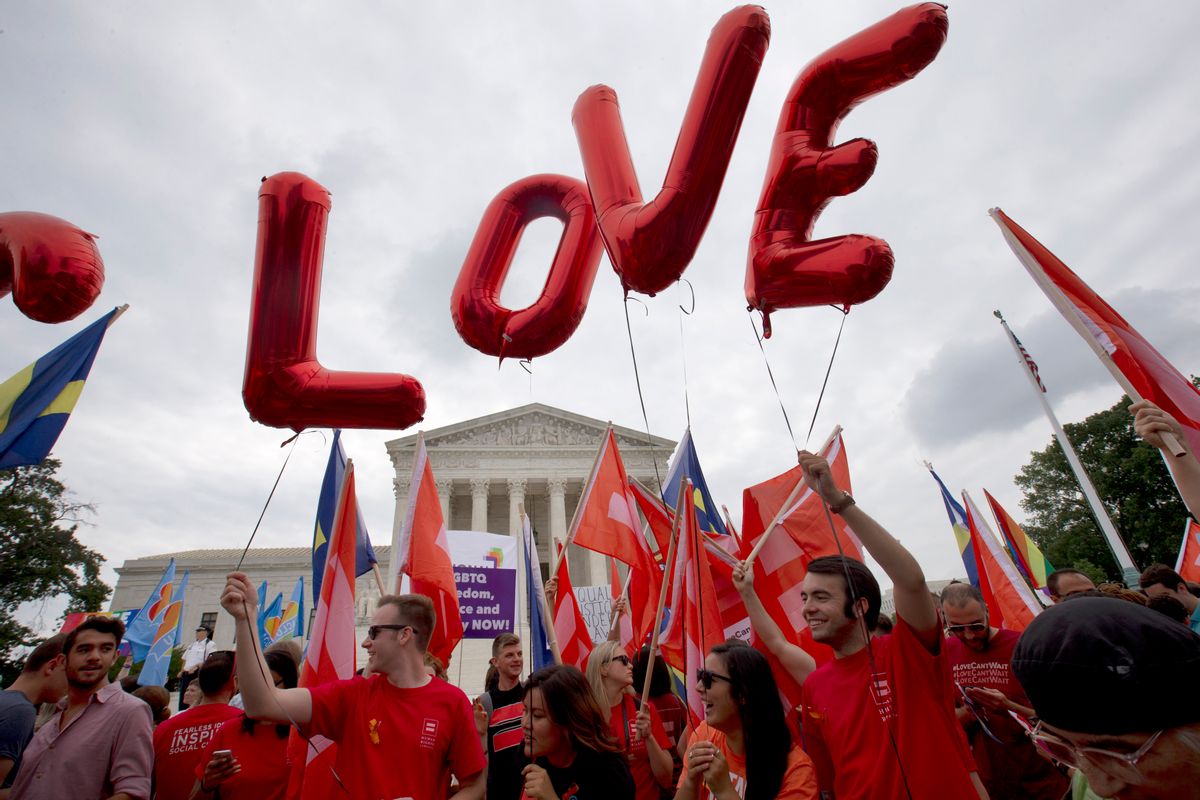 Balloons spell out the word "love" over the Supreme Court in Washington, Friday June 26, 2015, after the court declared that same-sex couples have a right to marry anywhere in the US. (AP Photo/Jacquelyn Martin) (AP)
--

When you have a public service job, the way it generally works is that you do what the job duties require of you — the job doesn't conform to your ideal description of it. Yet in the aftermath of marriage equality's recent decisive victory, a few people are having a hard time with that concept. People like Kentucky county clerk Kim Davis, who this week filed suit against Kentucky Governor Steve Beshear for not allowing local officials to deny issuing marriage licenses to same-sex couples.

Davis herself is currently being sued over her refusal to do what, if I am not very much mistaken, is her job. In her suit, she alleges, "The Commonwealth of Kentucky, acting through Governor Beshear, has deprived Davis of her religious-conscience rights guaranteed by the United States and Kentucky constitutions and laws, by insisting that Davis issue marriage licenses to same-sex couples contrary to her conscience, based on her sincerely held religious beliefs." She also is also demanding the governor pay any damages that result from the lawsuits against her.

Writing in the Herald-Leader, reporter John Cheves explains that the state's religious freedom law protects "sincerely held religious beliefs." Davis claims that issuing licenses to gay couples would force her to "act in contradiction to the moral law of God." Roger Gannam, a lawyer religious advocacy group Liberty Counsel tells the paper that the governor should make allowances for clerks to have a say in who they grant licenses to, permitting "some county clerks to issue same-sex marriage licenses if they did not object and others to refuse if it troubled their consciences, with same-sex couples traveling to accommodating counties if necessary."

But Joe Dunman, an attorney for one of the couples suing Davis, counters, "She swore in her oath of office to uphold the Constitution, and the Supreme Court has decided what the Constitution says here. She doesn't get to ignore it just because she doesn't like it." And ACLU attorney Daniel Canon asked the Courier-Journal in July, "Why should the taxpaying citizens of Rowan County have to go anyplace else aside from their own county to get a marriage license? Why should they be held to a different standard than anybody else?”

Last month, Davis told reporters that she had "prayed and fasted over her decision," adding, "It wasn’t just a spur-of-the-moment decision. It was thought out, and I sought God on it." And you know, good for her, that's fine. It's just that, how can I put this — who cares? I'm sure she grappled with the same moral questions that Hood County, Texas clerk Katie Lang did, when she too announced that would not issue licenses to same-sex couples "due to my religious convictions.” That did not, by the way, do diddly to keep same sex couples from a) getting married and b) suing her. You know why? Because when you work for all the members of your community, it's not an employer's obligation to accept "I prayed about it and sorry, no," as a legitimate excuse for not doing your duty.

If you're going to be a lifeguard, you can't object to going in the water. And if you're going to be a public servant whose job description includes upholding the Constitution, then you can't moan that you only want to uphold some of the Constitution. Well, you can, but then you need to find a different line of work. I suggest Ms. Davis staring praying for some guidance in that department.