Bernie Sanders is not the Black Lives Matter savior: Arguing over whether a single protest "worked" is missing the point

Appeasing white liberals who think Sanders above reproach isn't the goal, but neither is lip service [UPDATED] 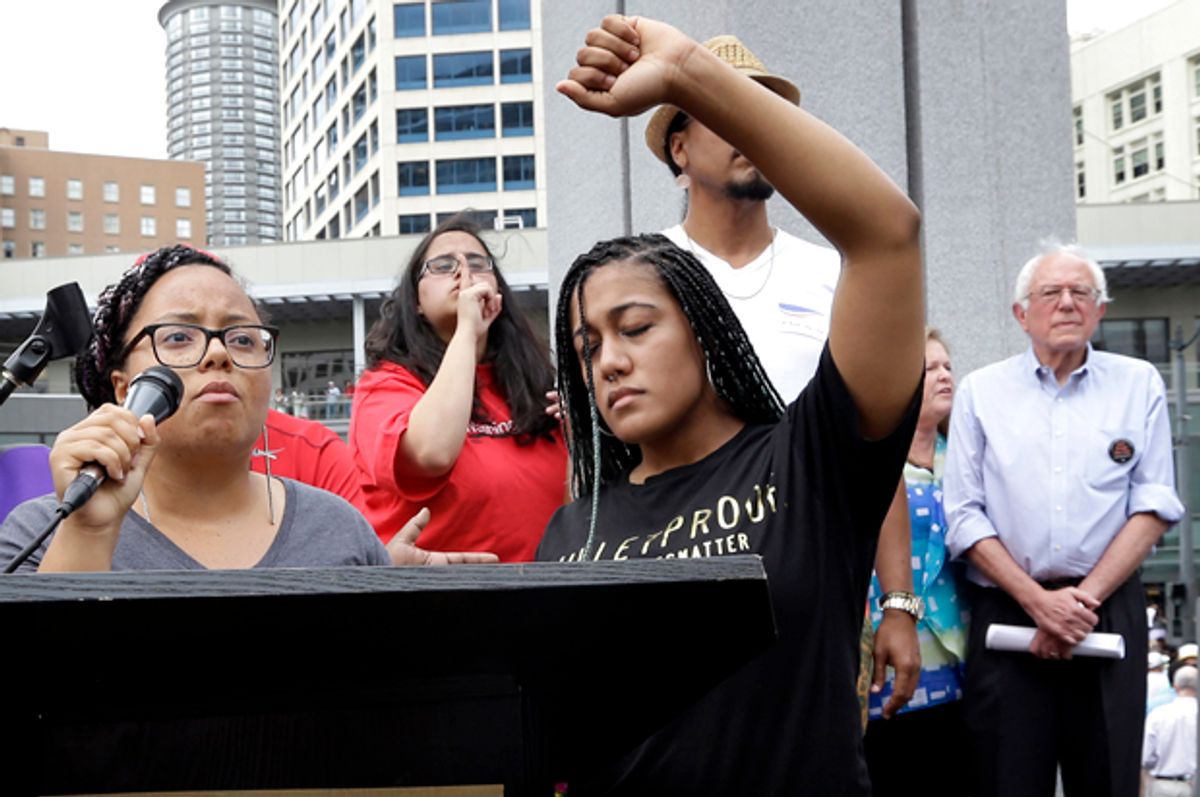 In writing, it is said that you must kill all your darlings. What sounds good and what feels good on the page and to the writer (and especially to the writer’s egos and emotions) may not be best for the body of work. So, you sacrifice and let go of small pieces for the whole. It’s a difficult, sometimes impossible lesson to learn, but damn if it doesn’t apply to just about all facets of life.

This past weekend a group of people who Mic has confirmed to be members of the Black Lives Matter movement (although earlier Daily Kos reported they are members of a group called Seattle’s Outside Agitators) shut down a Bernie Sanders rally on Social Security. They took the stage, seeming to demand not much beyond a few minutes of silence for Ferguson’s slain child Mike Brown and — as one speaker put it — “a criminal justice reform package.” We might call these demands, these requests, a few small darlings. But where do they actually fit into a conversation about policy changes and racial injustice on a political platform and beyond? In asking ourselves if a particular small darling — an outburst, a moment of silence, a rally shut down — “worked,” how can we make that determination, especially in just a few short days after the event?

On the one hand, there are many arguing in defense of the women who performed the shut-down. As their evidence that it worked, they cite Sanders updating the issues page of his website with a Racial Injustice subhead. Indeed, DeRay McKesson, one of our most well-known and prominent activists, praised the emphasis on physical violence and wrote on Twitter that he looks forward “to seeing him expand this.” They also point to Symone Sanders, the new, young, black political activist face of the politician’s campaign, as evidence of the protest's efficacy. (Oddly enough, Sanders has now been put in a position where she has to work against a Black Lives Matter movement, should they attempt further shut downs. To say the least, there’s something strange and juvenile about preparing shout-down matches on a political campaign trail.)

In theory, these are positive moves in the right direction, for those who wanted... well, therein lies the problem, doesn't it? What, precisely, did or do the Outside Agitators purporting as Black Lives Matter activists want from Bernie Sanders? Did they want a subheader on a website, one which didn’t actually work to radically dismantle this politician’s existing policies? Is it about merely seeing the names of our dead on a presidential hopeful’s website under the words (in all caps), “PHYSICAL VIOLENCE PERPETRATED BY THE STATE”?

Symone Sanders and Bernie Sanders had already started working together and her position was likely already in place before this weekend’s disruptions. But even so, is a black face on the campaign trail synonymous with actual work towards policy change?

It isn’t. Like the demand for a moment of silence, or the act of mic-snatching, much of this is performative. And performative acts can be powerful acts. Rage, protest, disruption, updating a website — all potentially good acts, which are also performative. But one issue with the performative is that it’s not entirely divorced from the act of lip service. As Chad Goller-Sojourner puts it in this helpful video about direct action, you can ask a politician to say the word “apple” repeatedly at his rallies, but having a specific takeaway is more useful.

Disruption for the sake of disruption is a welcome (integral, even) part of any movement. The Baltimore uprising was necessary. A police car being vandalized and destroyed in a country where the police are killing citizens every day is necessary (yes, necessary). For these politicians that we actually take seriously — who we believe have some capacity to move beyond political lip service towards actual, black life-changing policies — we are now at a point where a disruption can be made, along with formal requests, both major and minor. But a disruption at a specific event like a rally, directed at a specific individual like Bernie Sanders, demands less performance and more requests for direct action. Some would say action has be taken, but there’s a wide line — especially in politics — between lip service and policy change. That line seems to widen where the lives of blacks are concerned.

The other severe misunderstanding of the shut-down comes from those who feared that the possible white allies of the Black Lives Matter movement (including Sanders and his supporters) were put out or put off by the disruption. There lies, within these times, a dangerous myth of white handholding and black respectability, where we need “their” support for “our” causes, and therefore must take care not to offend, alienate, frighten or overtly challenge their stances. There’s an assumption that, for black lives to actually matter in America, blacks will have to take all the help they can get.

Many of the same people who expressed frustration with the protestors shutting down Sanders are those who will proclaim their liberal views and understanding of racism — but without being able to acknowledge their own privilege and the ways in which such privilege informs their views on this issue. They forget that not all black activists are always interested in calmly and respectfully explaining themselves. And not all black activists believe it is the job of the black American to convince others that we, for lack of a more appropriate or poetic statement, cannot breathe.

That is to say, in the face of this much violence, it might behoove interested white people to resist pointing their fingers at activists who may take a flawed approach to a problem, or may simply take an approach that makes a white liberal uncomfortable, concerned or confused. Again, Goller-Sojourner nails it:

“People are dying. You can’t expect us as activists to be civil in the way you might be civil... Almost every day a person of color is being killed by the police—an unarmed person. So that’s personal. There’s some rage here. You might not get it, but that’s not for you to get.”

We know that the distance between what is performative and what is tangible is vast in politics, as it is in a political movement. In addition to acknowledging the space between these two things (and in trying to bridge those gaps with more specific requests) there has to be some acknowledgement that a single politician — no matter what his history as a civil rights proponent and outside agitator — cannot dismantle the white supremacy at the core of a system that makes it necessary for a Black Lives Matter movement to exist. And this points to what is, perhaps, the biggest issue we’re all missing.

Even as I acknowledge why this message is important for many, there is nothing more absurd that I can think of at the moment than an American political platform that states Black Lives Matter, as if there were another option (even though we know that there is). But the truth is that, by its very nature, politics (absurd as it can be) cannot acknowledge the absurdity in such a statement — a statement about the significance of black lives in a country literally built on and by the lives of blacks. Luckily for those of us with other interests, philosophy can acknowledge absurdity (thank you, Beckett), as can poetry (thank you, Camus), and practically every other art form. Individual people who are not politicians can acknowledge absurdity (thank you, Jesse Williams) and a movement — even one seeking political reform, even one with specific calls for direct action — can, too.

We young-ish people might be in the early draft stages of the Black Lives Matter movement. We are still holding on to our darlings — our rages and outbursts and campaign updates. We need those. When we have so little time to mourn, when mothers are literally weeping and gnashing their teeth in the streets over slain children, we should be afforded as much — along with some missteps and miscalculations along the way. And we should certainly make time to disrupt for the sake of catharsis or rage itself.

I’d add that the only thing, perhaps, more absurd than having to publicly proclaim that Black Lives Matter (and having to ask your fellow Americans to proclaim the same) is the other, arguably far more significant, event of this past weekend — a protest in memory of the shooting of a young black man, which concluded with the shooting of a young black man. Again, it seems that we have many more pieces to sacrifice for the whole, and it all begs the question — how far will we get using the master’s tools, even from within the master’s house?